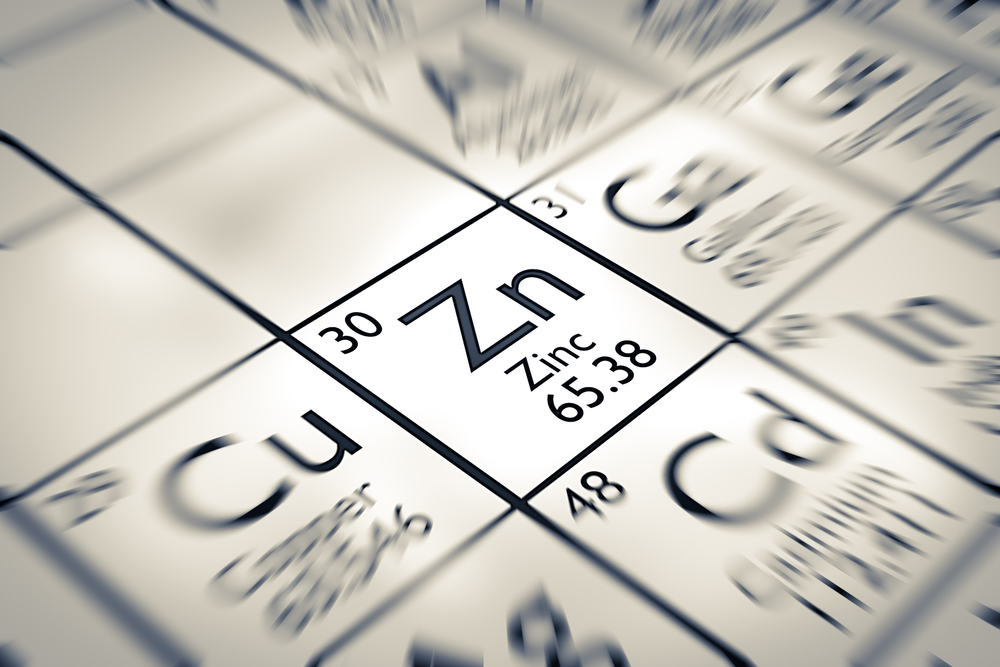 Zinc is a mineral; it is one of the trace elements, i.e., substances that are essential to the decorous functioning of our cells but in small quantities. The body contains about 2.5 g of which 60% are present in muscle and 30% in the bones. The remaining 10% is distributed in the skin, eyes, kidneys, pancreas, adrenal glands, and the prostate glands.

Zinc plays a major role in our growth, the immune, neurological and reproductive functions. It is necessary to more than a hundred of vital enzymatic processes in the body (300 as estimated by experts). It participates in the synthesis of DNA, RNA, and proteins, immune processes and wound healing, reproduction and growth.

Zinc deficiency causes many health problems, especially reduction of the physical and intellectual development of children, increased susceptibility to infections, fetal malformations. Zinc supplementation can cure faster common infections (colds, for example). The prescribed daily intake of Zinc is 15 mg per day for an adult. However, this intake should be adapted based on your age and your activity.

People at risk of deficiency Zinc are particularly children, pregnant and lactating women, people malnourished (e.g. anorexia), elderly, strict vegetarians people. An estimated 82% of pregnant women in the world have inadequate zinc intake. The amount of zinc recommended in the diet in the United States is:

Do you know that!

The result of excessive consumption of long-term zinc (e.g., 60 mg / day) is a deficiency of copper? At high doses, it prevents copper absorption by the body and conversely, a long copper cure significantly hampers zinc absorption and causes a deficit in zinc. The body may also be faced with a zinc deficiency if there is a significant supplementation of iron (more than 25mg). An excess zinc in the body can lead to a reduction in HDL (good cholesterol). 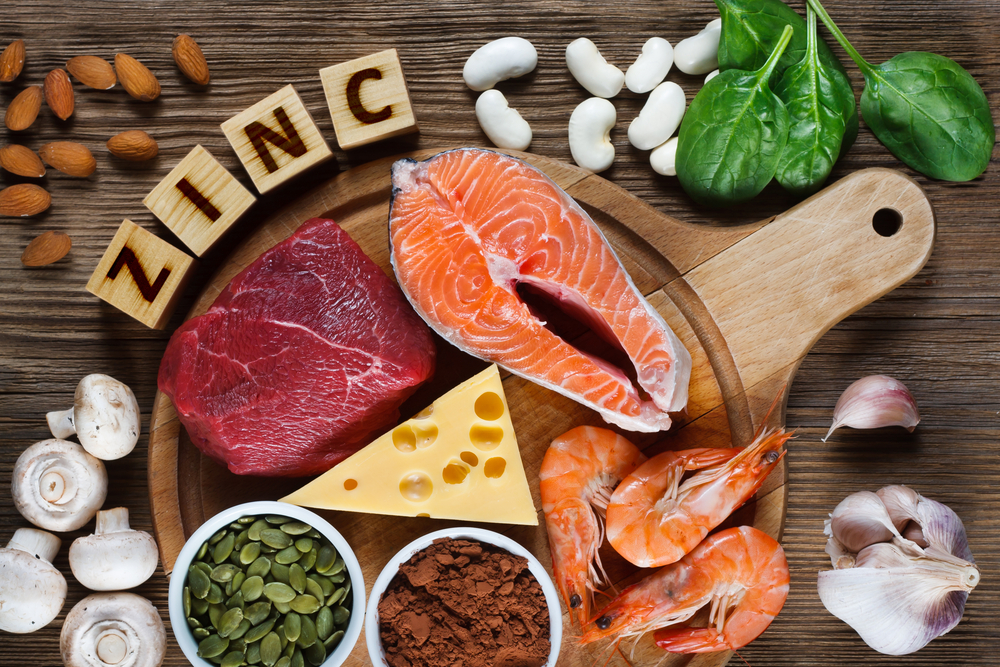 Friends and enemies of zinc 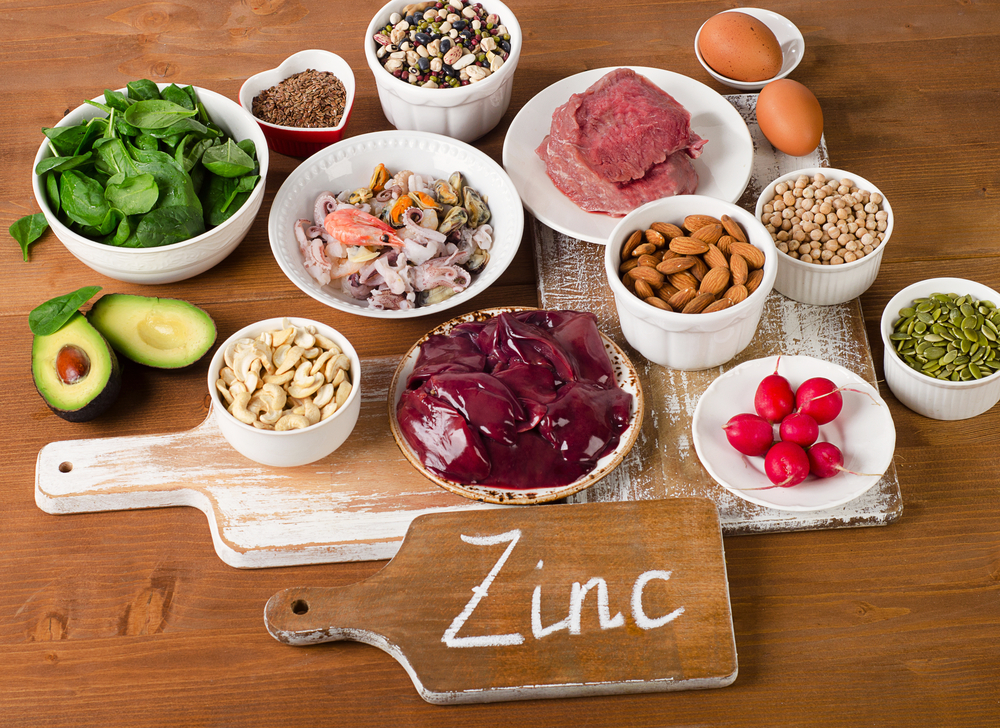 Oysters: The best source of zinc

By providing at least 20 mg zinc per 100 g, this food is definitely the best source of zinc.Oysters can be eaten raw or steamed since this preserves the trace element. They can be eaten once or twice a month.

Veal liver is also an excellent source of zinc. It provides 9 mg of the trace element per 100 g consumed.It can be steamed, grilled or cooked in a pan with herbs. You can eat veal liver once a week or every two weeks.

With 6 mg per 100g consumed, beef is a renowned source of zinc. For efficiency, this trace element has to be linked to proteins, which is beneficial and its present in beef.

How to eat it: prefer the less oily parts such as the rump or shank. Red meat can be on a menu once or twice a week without exceeding 500g total. One study, in particular, demonstrated the link between excessive consumption of red meat and colon cancer.

Lentils and beans are rich in zinc. They contain 5.50 mg per 100g. Split peas contain 3 mg per 100g. By eating these foods, vegetarians can avoid being deficient in zinc. Vegetables are an excellent substitute for meat. However, be aware that they contain phytic acid which inhibits the absorption of zinc and makes the least efficient assimilation. Thus, zinc from vegetable assimilates less than zinc from the animals.

How to eat them: in salads or warmed, the lenses can be consumed several times a week. Also, they contain little calories and contain fiber.

The wholemeal bread provides approximately 5 mg of zinc per 100g. But again, as this zinc is of vegetable origin, it is a little less well absorbed by the body.

How to consume: prefer natural sourdough bread yeast to the base. The longer fermentation time reduces phytic acid (which inhibits zinc absorption)

In addition to its protein and vitamins, an egg yolk contains up to 4 mg per 100g of zinc. For your nutritional intake, the egg is a good substitute for meat, And contrary to popular belief, it does not promote cholesterol.

How to consume: poached or boiled, you can eat two eggs three times a week.

You can stock up on zinc in the morning by eating a bowl of oatmeal or crunchy soy beans. Both contain 3 mg of zinc per 100 g. Again, phytic acid reduces the absorption of trace element, but the remaining amount is sufficient.

How to eat them: prefer cereals sold in “raw” form.

In herring, zinc content goes up to 2 mg/100g. The advantage of herring is that it is a small fish with less toxic heavy metals. Moreover, it is a fish rich in omega 3.

How to consume: The fish can be eaten twice a week.

Sesame-based food products contain about 10 mg of zinc per 100 g serving (70% RDA). You can use the sesame flour to replace wheat flour in the preparation of cakes and bread. Tahini is usually found in hummus; a chickpea purée often served in the kitchen of the Middle East. Tahini provides 4.6 mg of the mineral per 100 g serving (31% of RDA). 100 g full sesame seeds contain 7.8 mg of this trace element (52% RDA in micronutrient).

It is a popular food in the Middle East and East Asia. The seeds of pumpkins and squash provide about 10 mg of zinc per 100 g serving (70% RDA).

You can cook the pumpkin seeds in an oven and grill the squash. These seeds are usually eaten by breaking the outer shell and eating the inner seeds.

Watermelon seeds can be eaten raw.

These foods are a good source of zinc but watch your portions. 100 grams of oil roasted peanuts provide 6.6 mg of this trace element (44% RDA). The same amount of oil-roasted peanuts will bring less than half (about 3.3 mg per 100 grams, or 22% of RDA of this mineral).

Vegans: do they have enough zinc?

While zinc from plants is known to be less well absorbed, vegans do not seem more affected by zinc deficiency than others. According to a recent study, vegans have their zinc levels slightly below the average in their plasma. No study has yet verified the zinc levels in cells. It is important to pay particular attention to zinc intake for babies and infants.

The populations of the third world or developing countries are most prone to the risk of zinc deficiency because of food problems. A deficiency in this trace element results in fatigue, growth retardation or even repeated illnesses.

The symptoms of zinc deficiency are:

Maintenance chores of our bodies are not made by fairy finger proteins. But by proteins called “zinc finger”! Zinc plays a structural role required for stability of these proteins, which fulfill a variety of functions in diverse cellular processes.

Groups at Risk of Zinc Inadequacy

Adverse side effects of zinc and precautions 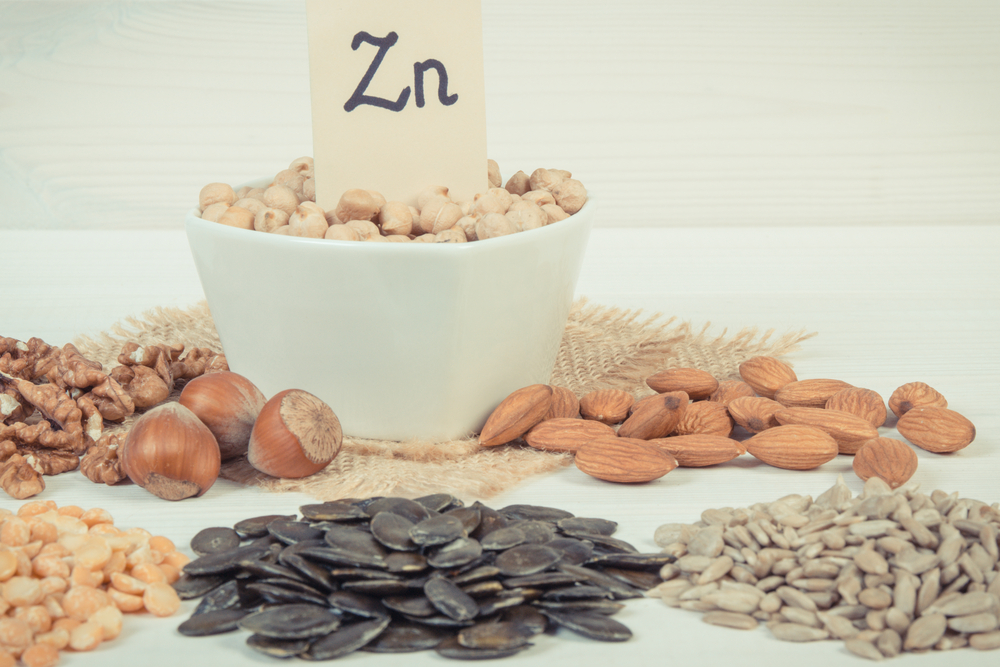 Zinc intake may be associated with the occurrence of gastrointestinal disturbances, usually mild and temporary such as:

Copper deficiency due to zinc

As mentioned earlier, excessive intake of zinc over the long term can lead to copper deficiency because it prevents its absorption by the body. Copper deficiency results in anemia, bone disorders such as osteoporosis, etc.

Studies have shown that zinc supplementation could reduce the high-density lipoprotein (HDL), the “good cholesterol,” thus contributing to increase the risk of cardiovascular disease.

The links between zinc and prostate cancer are quite ambiguous, but some research shed light on the issue: One study showed that men who took supplements containing more than 100 mg of zinc daily for 15 years were exposed to twice the risk of developing prostate cancer than the rest of the population.

Other research highlights the interest of the zinc supplement intake in patients with prostate cancer. An article published in 2011 showed that mortality from this cancer was lower in men who received 16-20 mg of zinc per day, compared to those whose daily contributions were limited to 9-13 mg.

In case of massive zinc intake is intoxication, resulting in different symptoms:

Do not exceed the prescribed dosage for zinc.

Tolerable Upper Intake Level (UL), which correspond to the daily amount of zinc should not be exceeded. The daily intake for each group should be observed to avoid the risk of health complications.

2 Recipes that are high in Zinc 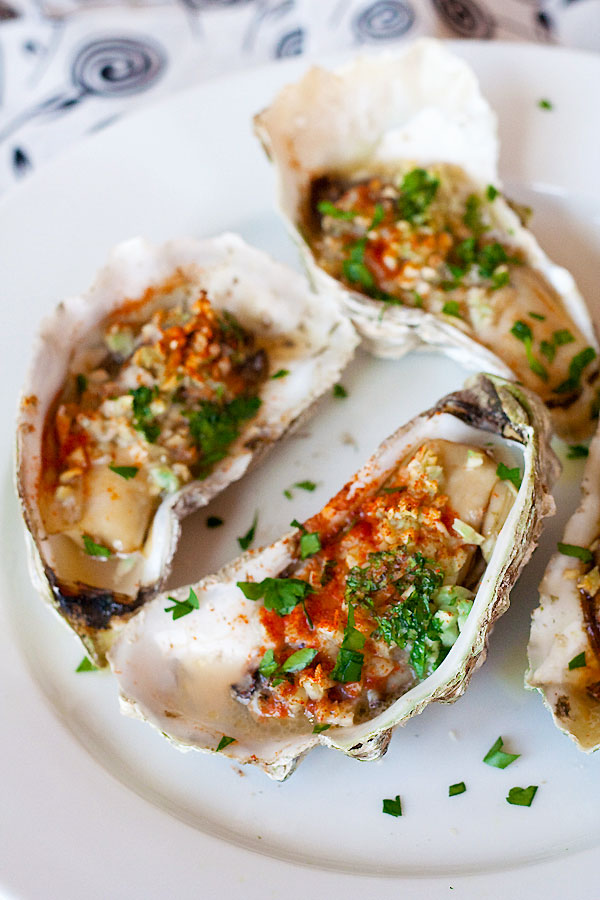 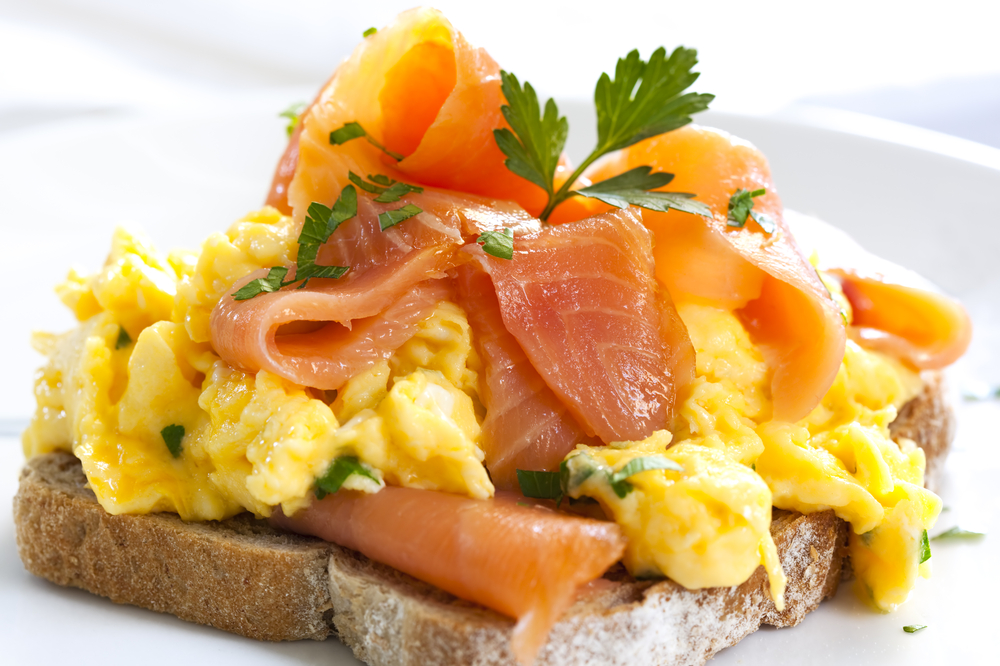 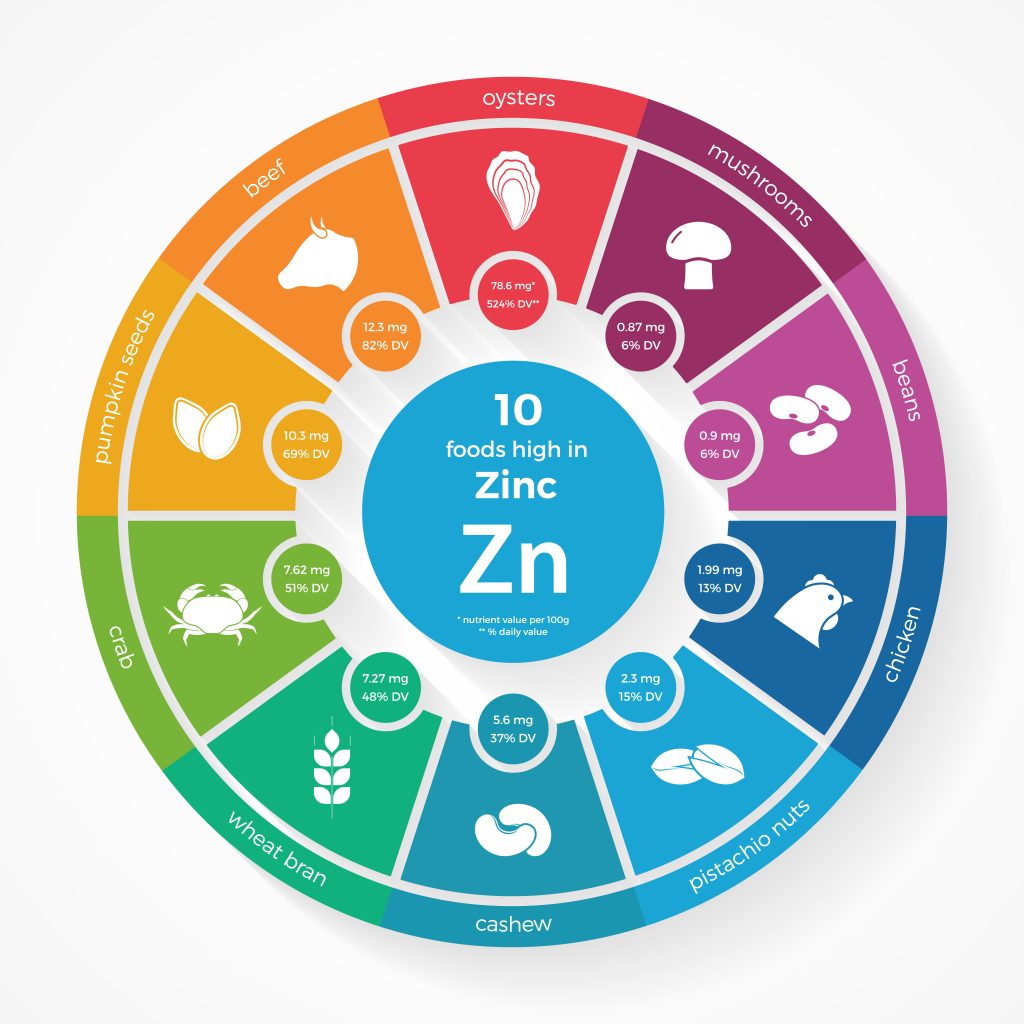 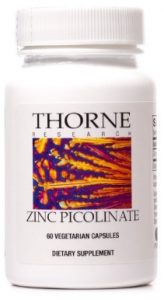