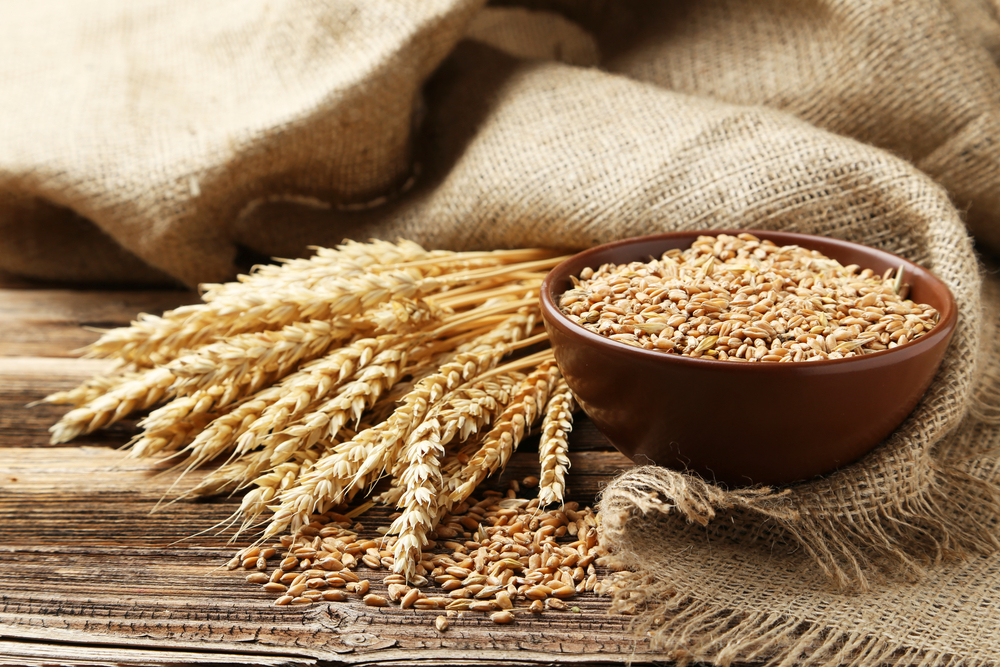 Wheat is one of the ‘big three’ cereal crops. Wheat makes up one-third of the world’s total cereal production with over 600 million tons being harvested annually. There is no doubt that the number of people who rely on wheat for a substantial part of their diet amounts to several billions. Wheat is enjoyed in many different forms around the world, including breads, crackers, cookies, cakes, noodles, spaghetti, pizza, roti prata, steamed bun, dumplings. It is also used in baby foods and is a common thickener in soups, gravies and sauces. 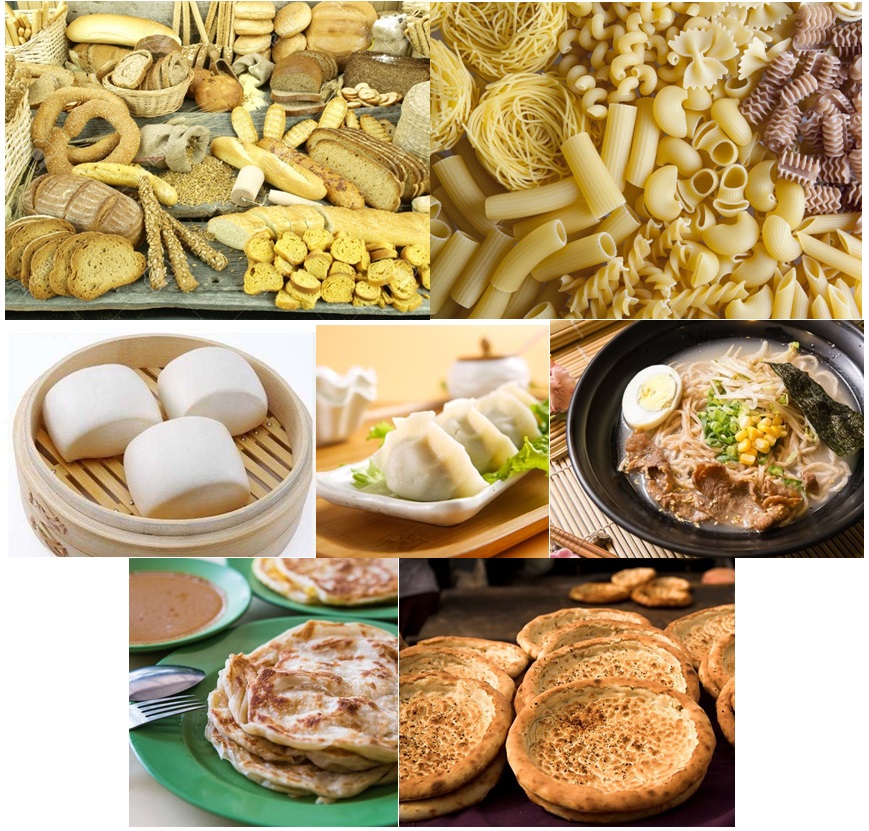 Two main varieties of wheat are widely eaten today: durum wheat (Triticum trugidumdurum) and bread wheat (Triticum aestivum vulgare). This article is about the bread wheat which is described as “hard” or “soft” according to its protein content. Hard wheat has more protein and is used for bread while soft wheat has less protein and is used for cake and other pastries.

Wheat cultivars are superior to most other cereals in their nutritive value. Besides the grain containing from 60-80% starch, it also contains from 7-22% storage protein. The gluten proteins in the seed endosperm impart unique bread baking qualities to wheat dough, which has made wheat the staple food in the ancient and modern world for billions of people. Wheat is human’s most important source of protein. It also contributes essential amino acids, minerals and vitamins and beneficial phytochemicals and dietary fiber components to the human diet.

From kernel to flour

A wheat grain is made up of three parts: the endosperm, bran and germ. Brans and germ contain almost all the fibers and many vitamins and minerals. Endosperm is mainly starch and protein with little vitamins. The essential process for obtaining the flour is to break and grind wheat kernels and extract flour, that is, to mill the kernel. 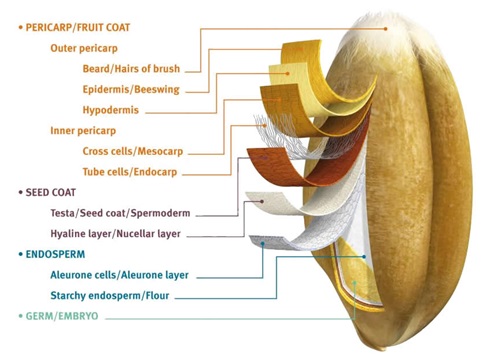 The botanical structure of a wheat kernel.

The first attempt to mill the flour dated back to thousands of years ago in the Middle East, when the flour was rich in bran parts that lead to a low bread making quality. This problem was overcome with the introduction of new machinery in the 1800s, when roller mill, softer and purifier enabled the production of refined flours. The objective of modern milling process is to isolate the starch endosperm from the germ and from the pericarp and seed coats. At the same time, milling reduces the particle size of the endosperm to less than 150-200 m. The removal of the bran parts improves not only the hygiene but also the bread-baking quality.

The milling process itself involves complex types, numbers and combination of operations: 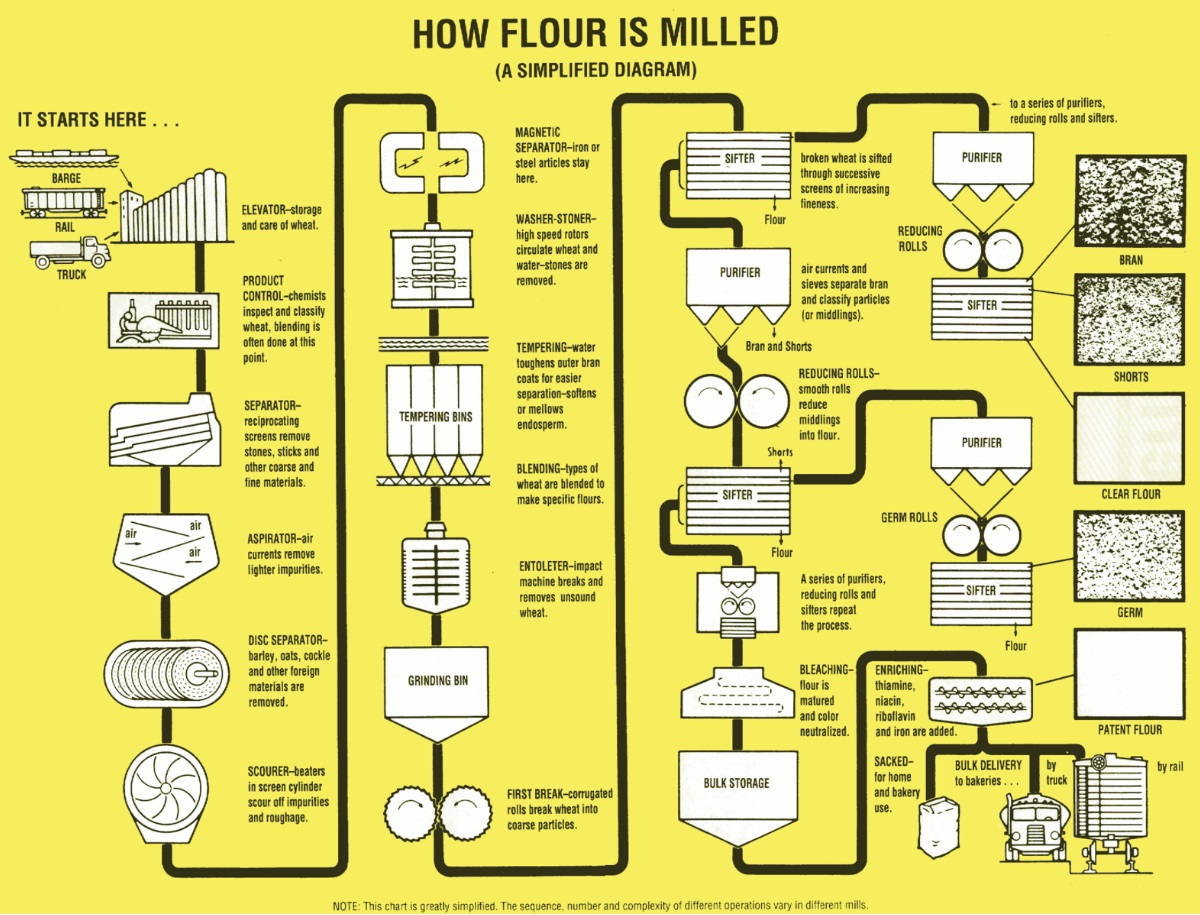 AACC international had defined wheat flour as being prepared from wheat such that the proportions of the intact grain – the bran, germ and endosperm– remain unaltered. Depends on the parts of the kernel used, there are two types of wheat flour: refined wheat flour (a.k.a. white flour) and whole wheat flour. Whole wheat flour contains substantially more vitamins, minerals, antioxidants and other nutrients than regular wheat flour since these compounds are concentrated in the outer portion of the grain.

Manufacturers remove the bran and germ and only used the endosperm when they mill the wheat grain to refined bread flour. White flour is popular because it produces lighter baked goods than whole wheat flour and has an unequaled ability to produce gluten. When the bran and germ are removed from the wheat kernel, vitamins and minerals are decreased, along with dietary fiber. Therefore, most white flour is enriched to replace some of the missing nutrients. 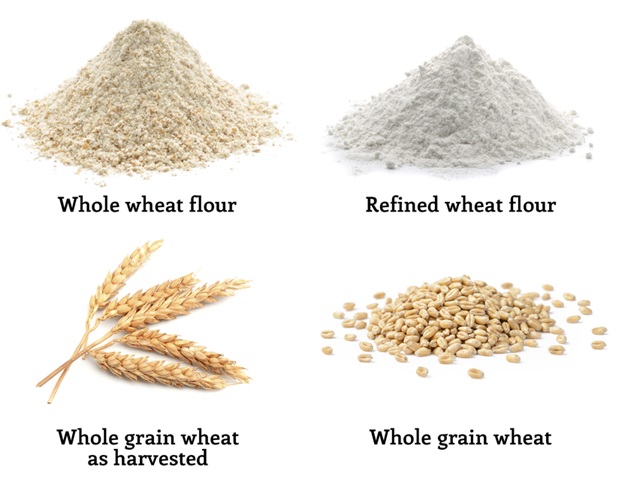 The health benefits of wheat depend on the form in which you eat it. There is few benefit if you select the refined white wheat flour to make your bread, noodle and biscuit. Whole wheat or whole meal flour is always a healthier choice than the white flour. The health benefits you can enjoy from eating whole-wheat based food products are:

Wheat is the staple food for human. The protein fraction is the reason behind the structure of bread. Wheat protein, also known as gluten, is the major source of plant protein from man. Protein quality is determined by the proportion of essential amino acids. The wheat protein contains adequate amounts of all essential fatty acids expect lysine, at least for adults.

Wheat is a significant source of both iron and zinc, contributing 44% of the daily intake of iron (15% in bread) and 25% of the daily intake of zinc (11% in bread). Both iron and zinc are essential minerals for a healthy body. Iron helps metabolize protein and plays a role in the production of hemoglobin and red blood cells. Iron deficiency leads to conditions like iron deficiency anemia, chronic anemia and predialysis anemia. Zinc regulates the immune function, controls diabetes, improve stress level and energy metabolism.

Wheat is a major dietary source of selenium in many parts of the world. Selenium content is 5-720 g/g in wheat germ, 0.03-0.78 g/g in hard wheat flour and 0.01-0.02 g/g in soft wheat flour. Selenium is an essential micronutrient for cognitive function, immune system, fertility for both men and women, with antioxidant, anticancer, and antiviral effects.Selenium is an essential component of more than 20 selenoproteins and selenoenzyme. Around 15 selenoenzyme play an important role in the regeneration the antioxidant system.The recommend daily intake of selenium by the WHO and FAO is 40 and 30 g/day for men and women; it is55 g/day in the US, Canada, European union; 60-70g/day in the UK, Australia and New Zealand.

Whole wheat is high in fiber. The fiber content of whole-grain wheat ranges from 12-15% of the dry weight. Most of the fibers are concentrated in the bran. The most common fiber in wheat bran is arabinoxylan (70%) and the rest is mostly beta-glucan.The dietary fibers help to soften and add the bulk to the stool. This increases bowel regularity and reduce the incidence of constipation. To enjoy the health benefits of the dietary fiber, you shall look for the whole-wheat products.

Dietary fibers of whole wheat products also promote weight loss. It is because that the ingestion of fiber delays the gastric emptying (keeps the food inside your stomach for a big longer), increases your satiety and decreases your hunger. The American Journal of Clinical Nutrition has shown that whole wheat, not the refined form, is a good choice for obese patients. Women who consumed whole wheat products over long period showed considerable weight loss.

Metabolic syndrome is a cluster of factors indicating a dysfunctional metabolism, which will ultimately lead to diabetes, heart attack, strokes, dementia, kidney disease and many other deadly diseases. Eating too much saturated and trans fat increases the incidence of cardiovascular disease, while the good fat omega-3 fatty acids decrease the risk of cardiovascular disease. A high intake of whole wheat products lower the triglycerides or fat in the bloodstream. Furthermore, whole wheat also shows benefits on insulin sensitivity, lipid metabolism and protect against cardiovascular disease, stroke and type 2 diabetes.

Wheat is rich in magnesium which is a cofactor or more than 300 enzymes in our body. Some of the enzymes play an important role in insulin secretion. Intake of the whole wheat product also increases the insulin sensitivity. Moreover, the dietary fiber of whole wheat also promotes healthy blood sugar control by slow down the starch breakdown in our small intestine and smooth the glucose surge in our blood stream. Therefore, for people with diabetes, whole wheat products are a better choice as staple food than the rice

Inflammation is associated with the conditions of diabetes, heart diseases, obesity and cancer. Studies have found the association between the intake of whole wheat products and the decreased inflammatory markers. The bioactive compounds in wheat that are responsible for reducing the chronic inflammation is its betanin content. Studies showed that betanin attenuated oxidative stress and inflammatory reaction. It reduces free radical damage to fats and tunes down enzymes in the body that ignite inflammation reactions.

Side effects of eating too much wheat

Wheat is generally safe for most of the people. But wheat products are known to be responsible for several adverse reactions in humans. The term ‘wheat intolerance syndrome’ refers to the entire category of gluten issue: celiac disease, non-celiac gluten sensitivity and wheat allergy. People with ‘wheat intolerance syndrome’ should avoid any wheat-flour based food products are allowed. 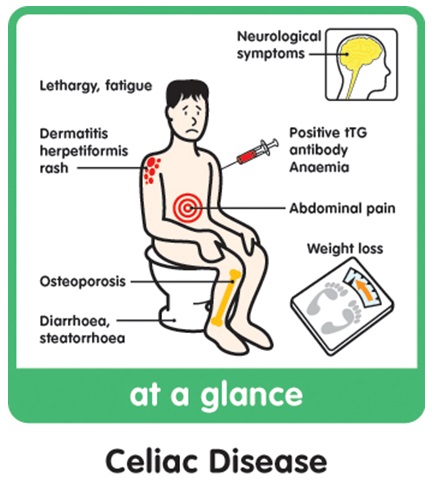 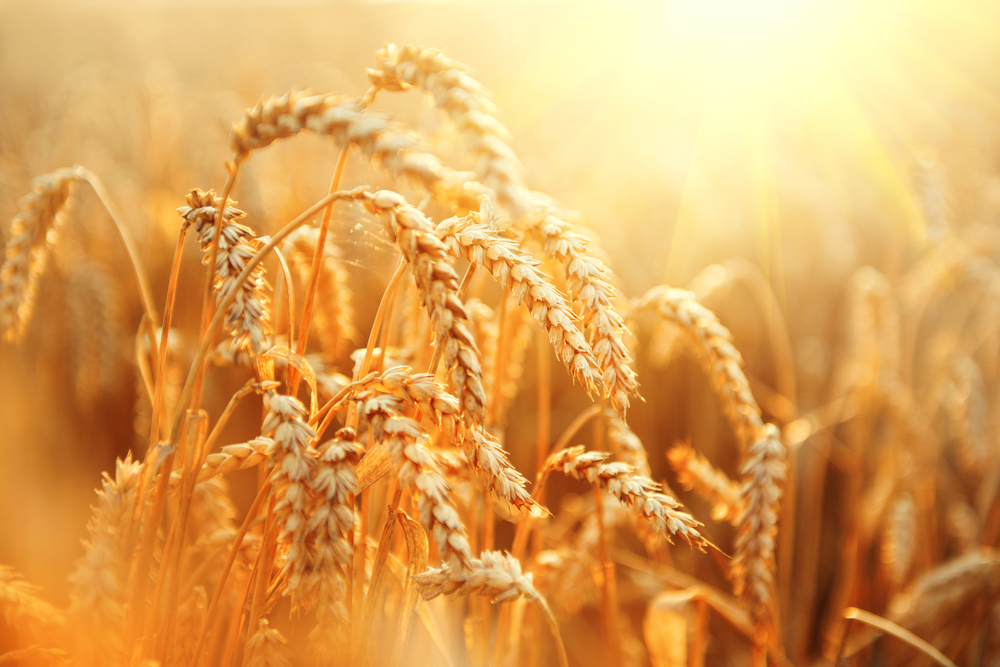 For every 100 g of whole-grain wheat flour, you will get the following macro- and micro-nutrients: 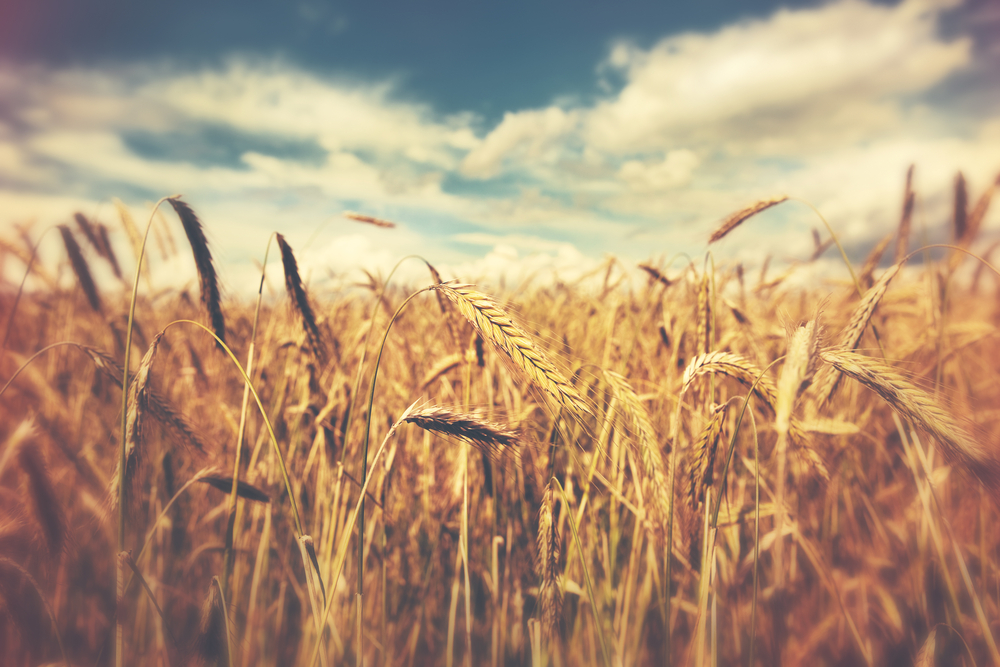 Wheat, barley and rye come from the same ancestor, Triticeae. Wheat is believed to have originated in southwestern Asia. The first cultivation of wheat dated back to 10000 years ago, as part of the ‘Neolithic Revolution’ marked with settled agriculture. Cultivation spread to the Near East by about 9000 years ago when bread wheat made its first appearance. Some of the earliest varieties of wheat – einkorn and emmer, are still enjoyed today in the areas where they are thought to have originated: einkorn in Georgia, Armenia and Turkey and emmer (farro) in the Central Mediterranean.

The wheat spread from its site of origin across the world: via Anatolia to Greece to get into Europe, and then both northwards to Italy, France and Spain, finally reaching the UK at about 5000 B.C. Similarly, wheat spread via Iran into central Asia reaching China about 3000 B.C. and to Africa. It was introduced to Mexico in 1529 and to Australia in 1788. Wheat became favorite grains for two main reasons: the seeds were easy to separate from the inedible parts of the grain, and the dough become elastic when mixed with liquid. This meant it was easy to harvest the grain and to create a wide range of foods, such as bread, pasta and porridges.

Wheat is the world’s largest and most important food crop for direct human consumption, with an annual harvest of more than 620 million tons produced in over 40 countries for more than 35% of the global population. Wheat is grown on over 540,000,000 acres worldwide– more than any other crop. Temperate and southern Russia are the world’s main wheat-growing regions. Wheat is currently grown from 67°N in Norway, Finland, and Russia, to 45°S in Argentina and Chile. The major wheat producing regions are southern Russia, central plains of the United States, southern Canada, the Mediterranean Basin, northern China, India, Argentina and Australia. Wheat was first grown in the United States in 1602. The US produces approximately 55-60 million tons per year and supplies about 40% of the world’s exports. 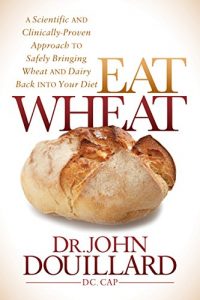 Eat Wheat: A Scientific and Clinically-Proven Approach to Safely Bringing Wheat and Dairy Back Into Your Diet 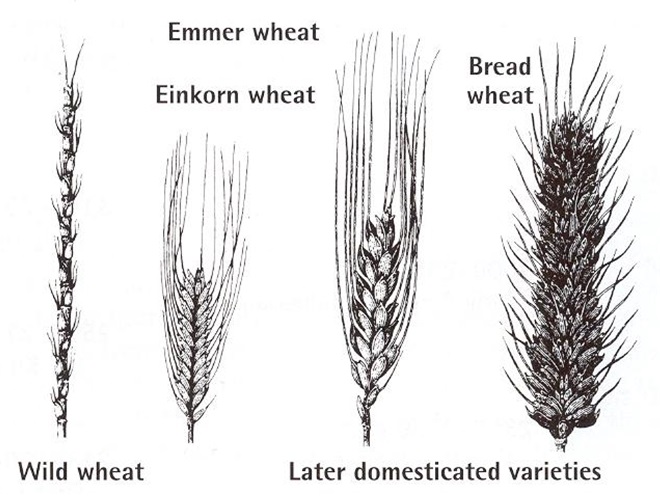