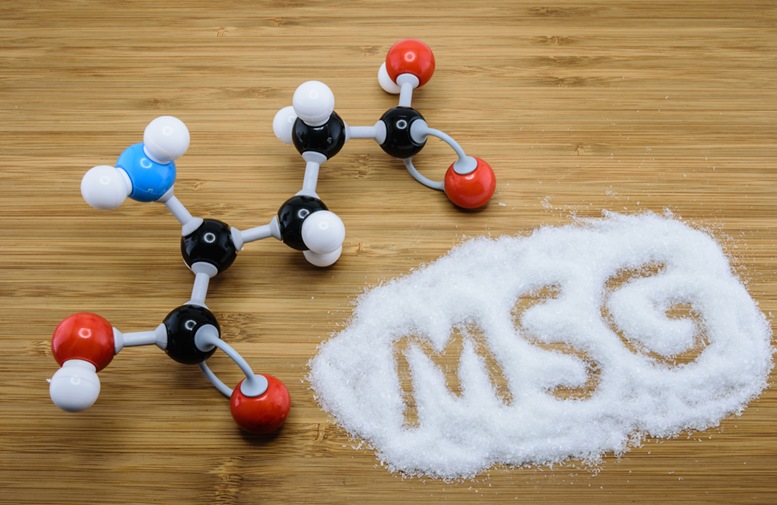 Monosodium glutamate (MSG) is the most famous, the most notorious and the most common flavor enhancer added into the food. Even though MSG has no flavor of its own, it imparts a pleasant and full aroma, when mixed together with other food ingredients. It was, therefore, many times referred as the “secret” of how to make a food taste fantastic. In fact to such an extent that the taste generated by adjunction of MSG has been dubbed as the “fifth basic taste”, after salt, sweet, sour and bitter one. This unique hedonic sensation that gives depth to food flavor has been described as umami, which translated from Japanese mean “deliciousness”. And it really is!

The Discovery of MSG

The flavor-enhancing property of MSG was discovered in the early twenties by a Japanese chemist and Tokyo Imperial University professor, Kikunae Ikeda. He was curious to understand why Dashi, a stock of broth prepared by his wife from dried kombu seaweed – a cornerstone in Japanese cooking – possessed such distinct and pleasant flavor. By closely studying the chemical composition of its main ingredients, he pinpointed glutamate as being the main reason for such a distinctive soup flavor. As he could not describe the taste using one of the four primary tastes known from before, he decides to name the taste umami.

By adding sodium to isolated glutamate compound, he obtained white crystalline powder today known as MSG additive. After scaling-up, Ikeda launched the production of the MSG-based condiment in 1909 under the name Aji-no-moto, which is translated as “essence of taste”.  Since then, the additive has been widely used in Asia cousin as well as in foodstuff all over the world, adding meaty or brothy taste to many dishes and just making them delicious.

How does MSG work?

This odorless and water-soluble powder consist of an amino acid component called L-glutamic acid (glutamate), which is one of the most abundant amino acid found in nature. Since glutamic acid itself has a weak umami taste, it is usually added to food either as purified monosodium salt (MSG) or as hydrolyzed protein, which attributes unique umami taste. The so-called ” taste” has no ability to enhance any from the other four basic tastes. Instead harmonizes with them imparting savories, which leads to the improved palatability of foods. Chemical stimuli in umami substance are the first being absorbed by specific taste receptors on the tongue, triggering a slight sensation of “furriness” and a mild but lasting aftertaste. Therefore, elimination of umami substances from certain foods would lead to a loss of delicious taste of that food.

The Source Of the Myth

In 1968, a scientist wrote a letter to The New England Journal of Medicine complaining to experience neck numbness and general palpitations together with drowsiness, after eating his meal in the Chinese restaurant. Even though he presented few options that explained the emergence of the symptoms he experienced, he pinned the larger part of the blame on MSG addition into the food. The journal published the letter under the heading: “Chinese-Restaurant Syndrome”, and so started a media driven “no MSG” campaign, making this additive a subject of much public controversy. But is MSG really as bad as it is made out to be?

All MSG found in food are not created equally

Big quantities of MSG are nowadays produced industrially by fermenting different substrates such as corn starch, sugarcane, sugar beets or molasses. This form of free glutamate is added in almost all processed foods and is valuated by manufacturers for making the food more palatable. However, glutamate can be also found in products where no MSG was added, indicating its natural occurrence. Regardless of whether they are of vegetable or animal origin, glutamate can be present in two different forms: as a free ion or bound with the protein. When present in the complex, glutamate becomes tasteless and therefore no longer imparts savory taste to the food. Because only its free form is responsible for its umami taste, food with large amounts of free glutamic acid is more delicious. The increased amount of MSG might be a byproduct from protein processing or a result of their break up (hydrolysis). Therefore, fermented products such as soya, and those subjected to ripening as cheese, contain the highs amounts of natural free glutamic acid due to protein hydrolysis. Such newly formatted hydrolysates contribute greatly to the characteristic taste of these foods. Moreover, food high inbound glutamate have better predisposition to formation of free glutamate when processed. 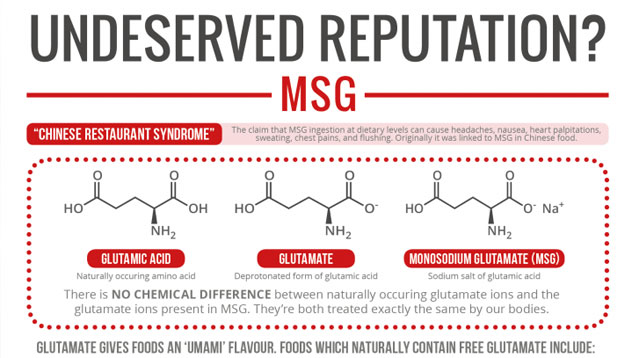 The most common foods with high content off added free glutamate:

How to keep MSG out of your diet?

Since MSG is found so frequently, especially in processed foods, it is very difficult to avoid it. Moreover, labeling agency does not require specifying naturally present MSG on food labels, which makes its identification almost impossible. However, by paying attention to this following, you will be able to reduce MSG intake to a certain extent:

Side effects and health-related concerns on MSG?

For the past 50 years, all the way from the publication of the article together with some subsequent accusations, MSG is believed to be the main cause for experiencing the complex of symptoms after eating food containing this additive. Its negative image becomes a major problem for manufacturers as the consumer do not want to buy MSG containing products as they believe it will harm their health. However, double-blind placebo-controlled studies were conducted including 130 individuals who reported to experience these symptoms at the normal level of dietary MGS intake. The results showed no relation between the syndrome and ingested free glutamate. Moreover, previously mentioned symptoms have been also observed when same individuals eat that did not contain MSG, indicating that symptoms are not specific to this additive.

Similarly, researchers did not observe any adverse effects in individuals who took food which containing different doses of MSG up to 3g at once. On the other hand, some of the previously described symptoms could be observed only and exclusively when MSG was administrated in very high doses (12g in 99 people tested). However, those effects were neither serious nor persistent and the frequency of the response was low.

An average MSG intake of an adult coming from industrialized countries range between 0.3-1.0g, which is far less than estimated minimum dose. This amount varies depending on two things, the individual’s diet and its regions of origin. In Asian countries, it is 3.5 times higher than in Europe, mainly due to the wide variety of food containing natural or added MSG.

Glutamate is not only a food additive but is also an important neurotransmitter in the brain. Therefore the question of the relevance of its neurotoxicity in humans receiving MSG from the diet is crucial. Although some of the data firstly reported serious neurotoxicity damages in mice treated with MSG. Further research completely rejected these findings. Even though glutamate is a neurotransmitter in the brain, a human body can produce sufficient quantities and therefore dietary glutamate is not needed. Therefore, ingested glutamate do not pass from the gut lumen into the circulation even when the intake is very high. Moreover, the blood-brain barrier is impermeable which prevents dietary glutamate to enter into the brain sphere. It can, therefore, be concluded that till now no link between MSG and toxicity was found at its normal dietary levels.

This is just another of the myths that have to be busted. The truth is that there is no difference among glutamate ions present in MSG and those naturally occurring in food. Consequently, there is nothing such as MSG allergy.

Due to the increasing rate of overweight and obese people in economically developing countries, there are emerging allegations of MSG to this phenomenon. Recently, controlled studies involving individuals exposed to diet, sometimes consisting extremely large MSG doses, showed no effect on their body weight. The fundamental reason is that glutamate is metabolically compartmentalized in the body and generally does not passively cross biological membranes. This indicates that associations reported in some studies are more likely explained by co-varying factors in the environment, which include diet and physical activity rather than food containing MSG.

In short, the current evidence collected does not suggest that MSG has any adverse effect on the human body and was generally recognized as a safe (GRAS) food ingredient. This is what science is all about, not accepting something as truth without proper evidence. And maybe quite soon it will be common to have a bottle of MSG on the kitchen shelf together with the other spices. But for now, when someone tells you that something is “bad” for you, dig and try to find out the truth. There will always be doubters but you don’t always have to believe them.