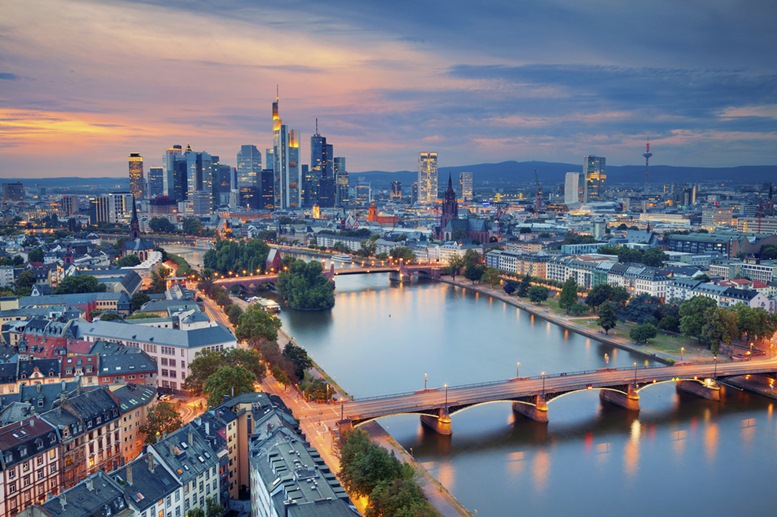 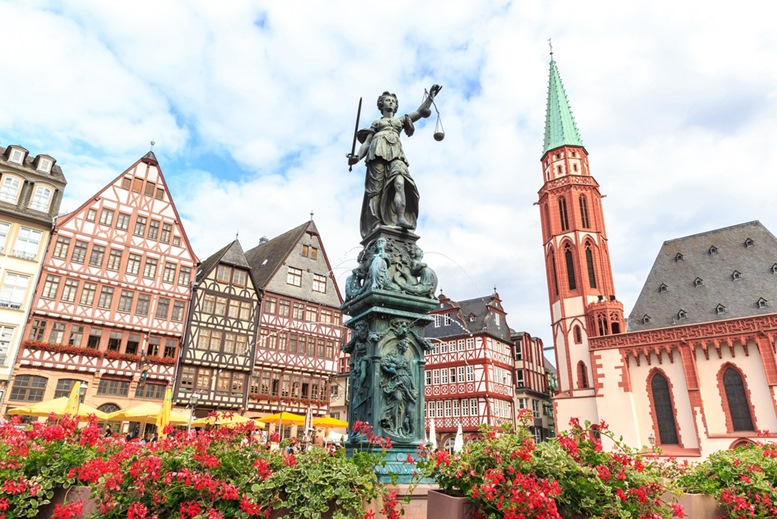 Frankfurt is the center of Germany’s financial and business industry, and is the home of the original Frankfurter that is enjoyed around the world. Like much of Germany, Frankfurt has been reconstructed after it was hit in World War II.

Upon arrival, notice Frankfurt’s impressive skyline, then dive into our top recommended things to do! 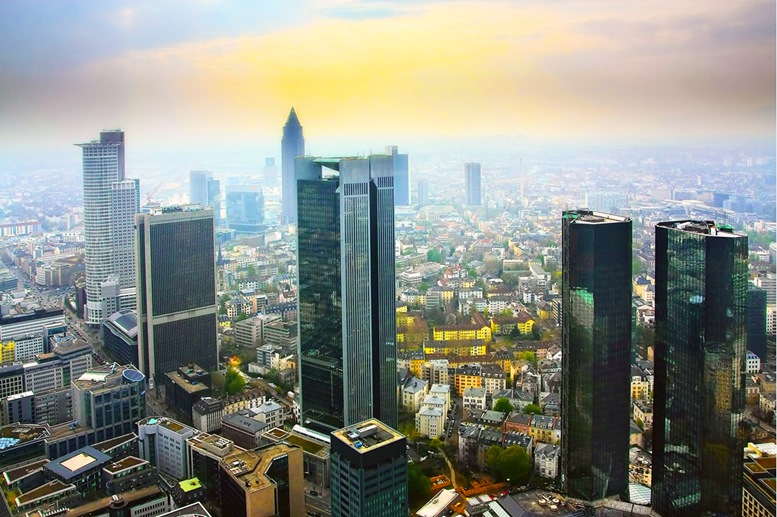 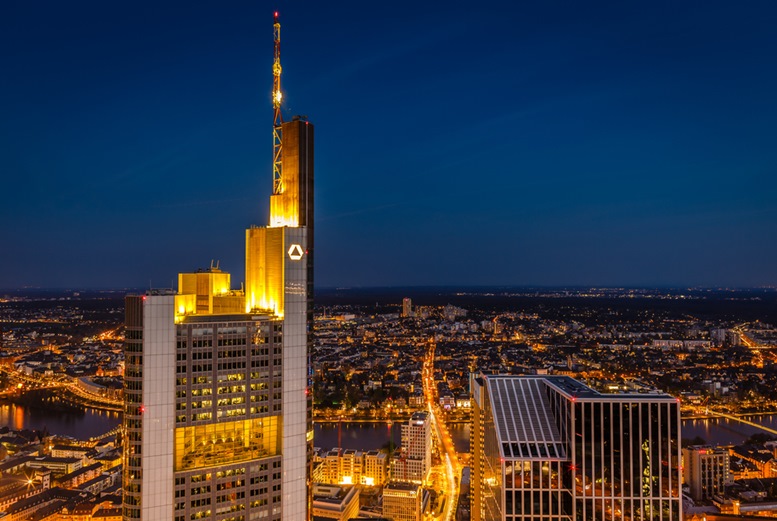 Commerzbank Tower – seen from the Maintower

A fun fact: Frankfurt’s full name is actually Frankfurt am Main – a city on the river Main.

The Main Tower is a high-rise building of 56 floors leveling up to about 200 meters. The tower offers the best views over the city and the river as the highest public-access building. At the top, there is an observation deck with a bar and restaurant. 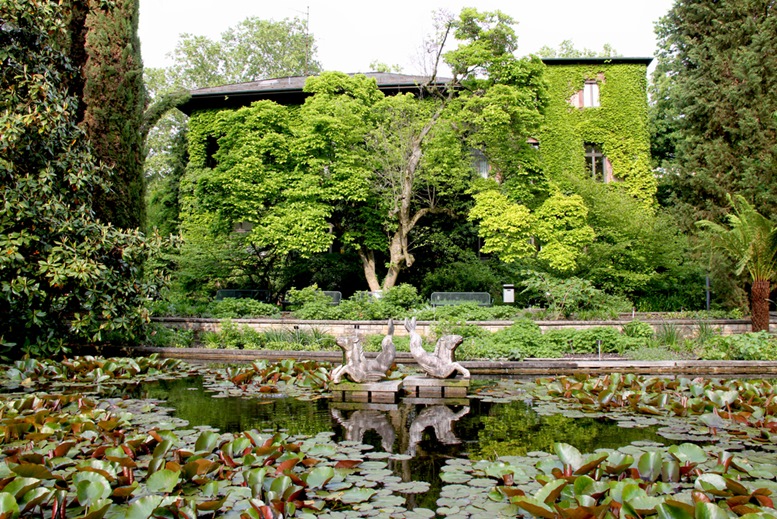 The Palm Garden, established in the 1870’s, is a large botanical garden in Frankfurt’sWestend-Süd district. This garden offers much more than exhibitions of thousands of flowers and plants from around the world – it is also a hub for outdoor activities and events. 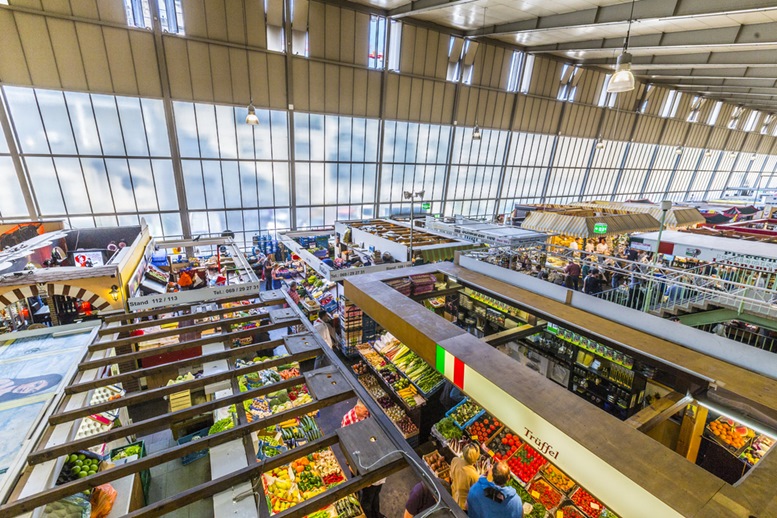 The Kleinmarkthalle is an intimate indoor market with local and international influence. Shift between stalls of food, spices, souvenirs, plants, and even clothing.

Expect an overload of colors, smells, and bustling people.

Note that this market is open every day except for Sunday. 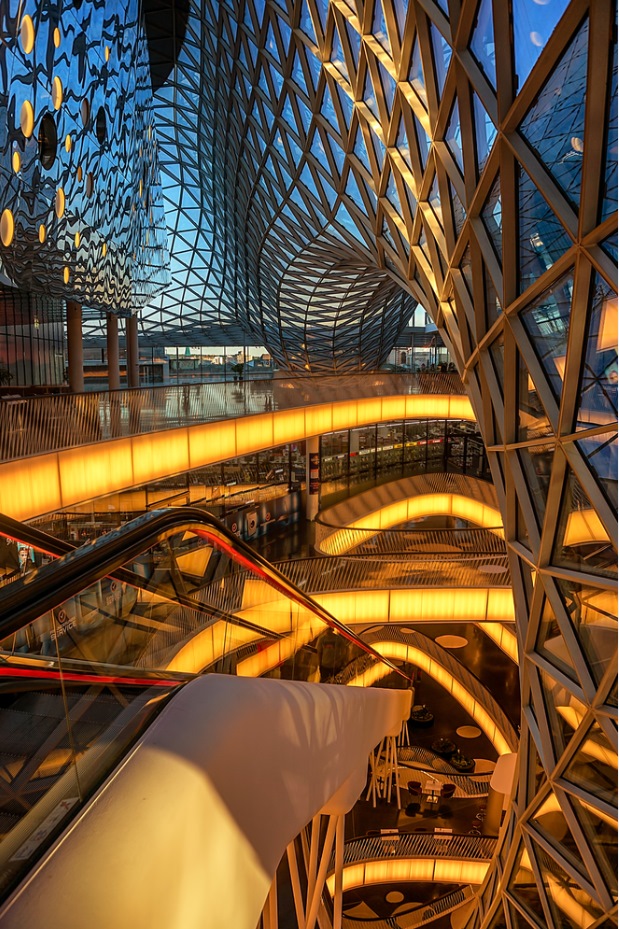 The Zeil is Frankfurt’s (and Germany’s) main shopping street and is made up of high-end shops, boutiques, department stores, and the Zeil Galerie complex.

The Zeil is located in the center of the city and is incredibly accessible. This pedestrian-only street is quite busy at all hours – perfect for strolling and people-watching!

If you want to take a break from shopping, check out one of the many terraces along this street to enjoy a nice meal while still absorbing the energy of the passersby. 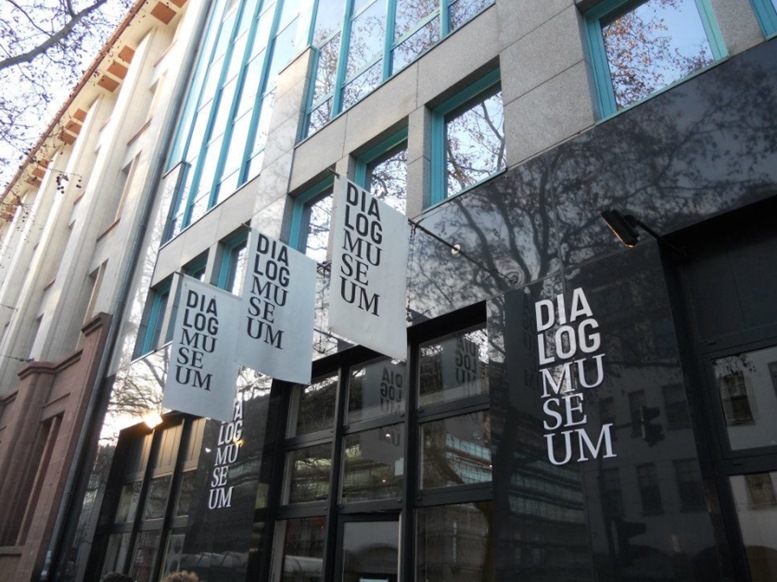 Frankfurt’s 10+ museums all line both sides of the river Main, allowing for a lovely walk to the museums or a great standalone experience.The embankment also hosts a large flea market on Saturdays.

While you cannot go wrong in whichever museum(s) you choose to visit, the DialogMuseum, is quite unique and one of our must-see’s.

The DialogMuseum forces visitors to change perspective and understand what it’s like to be blind. A test of your senses, this experience is run by blind people and walks you through a variety of exhibits that rely on your nose, ears, touch, and taste.

St. Paul’s Church, built in the 18th century, is a symbol of both religion and politics. It opened as an Evangelical Lutheran church, then became the seat of the Frankfurt Parliament.

This red sandstone building was also destroyed and reconstructed after the war, and now stands as a strong reminder of the beginnings of Germany democracy. 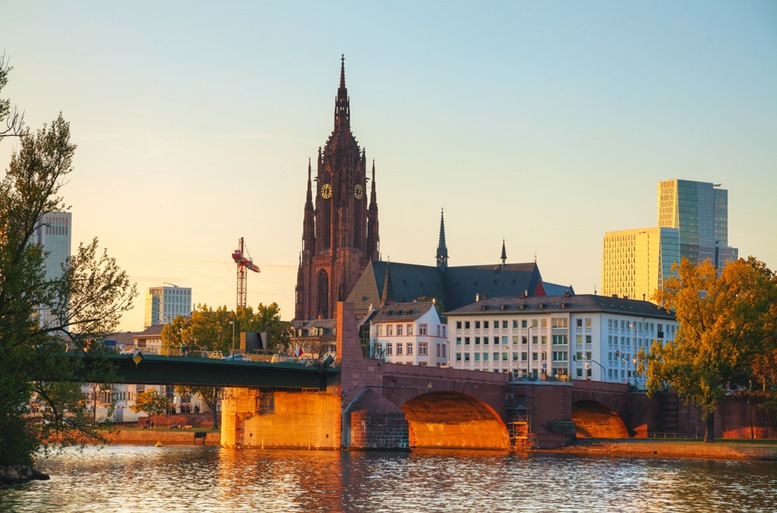 This Roman Catholic Church, dedicated to St. Bartholomew, is Frankfurt’s largest religious building. It’s interesting to note that despite its name, it was in fact never an official cathedral.

Nevertheless, this church holds high historical significance as excavations have uncovered at least four churches beneath it, on the same grounds. In addition, many emperors and kings have been elected here.

Between April and October, you can climb the spiral staircase to the top of this cathedral for stunning views of the city. 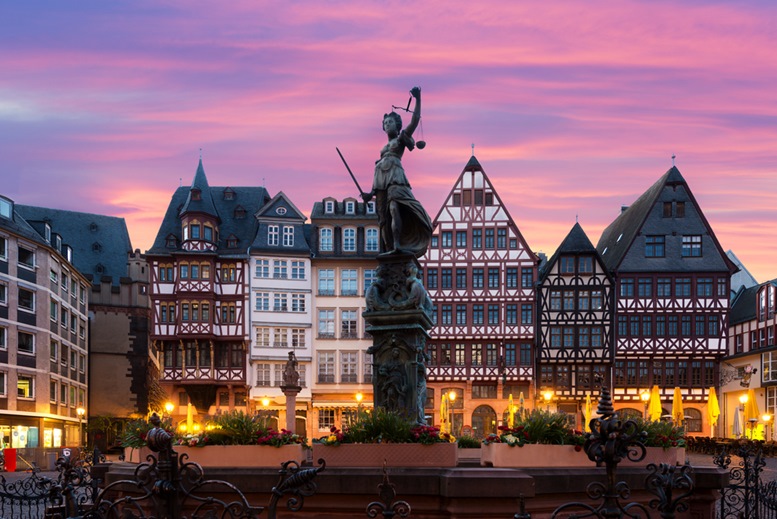 Romerberg Square is in the center of Altstadt, and is also a highly concentrated pedestrian area. Around this square are many picturesque houses, the Old Town Hall, New Town Hall, the Historical Museum, and a couple of churches.

In the center of the square is the Fountain of Justice; the oldest fountain in Frankfurt; dating back to 1543. In the fountain stands the Goddess Justitia – bearing a sword and scales. This fountain, and the goddess alike, have been reconstructed over time, but have always held strong political importance. 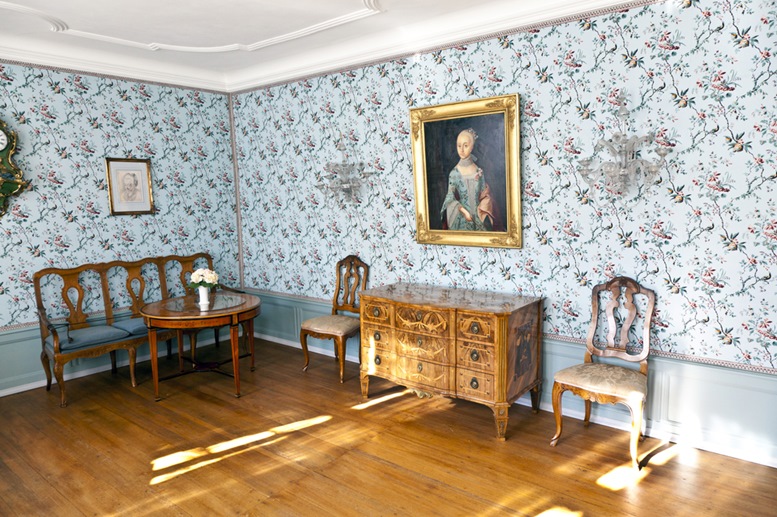 Cornelias Room in the Goethe museum

Johann Wolfgang von Goethe; Germany’s most decorated writer; was born and raised in Frankfurt. His home, from his birth in 1749 to 1765, has been fully restored (after damage from WWII) to a preserved space that showcases his upbringing and way of life. All of the original furniture, artwork and Goethe-family belongings can be seen.

Not only do visitors peek into the private life of a famous writer, but also get an opportunity to understand what life was like for the upper class in 18th-century Germany.

In addition to the home, there is a museum next door that highlights artwork from Goethe’s era. 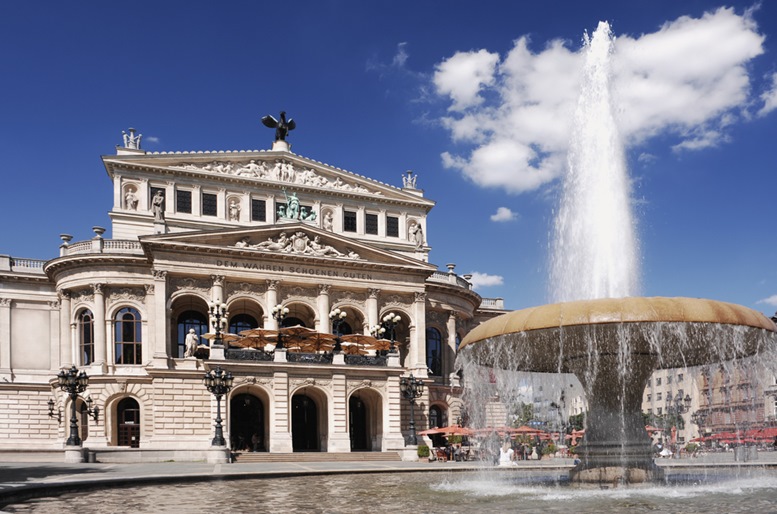 Hosting nearly 300 events annually and with a Large Hall that seats 2,500, Frankfurt’s Old Opera House should be a stop on every visitor’s agenda.

The Opera House is a gorgeous, incredibly grand piece of architecture, that took a lot of time and public support to be reconstructed after WWII. For nearly 40 years after the war, it was considered ‘Germany’s most beautiful ruin’. 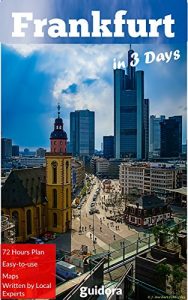