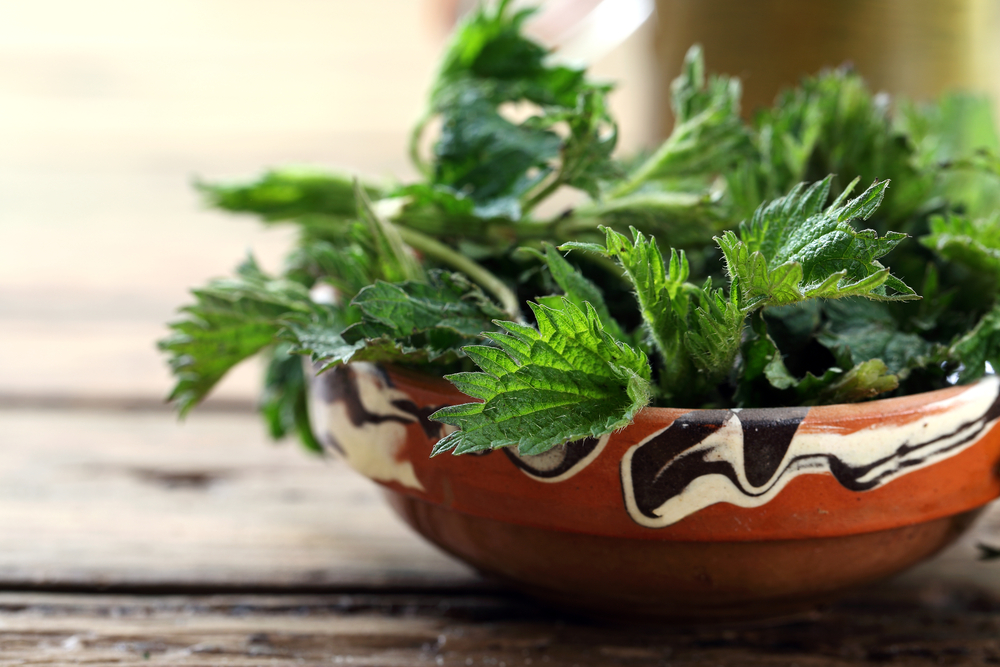 Stinging Nettle is known to some as a weed found in the garden that can deliver a painful bite. Nettle is far more than an annoying weed. Leaves, stems, and roots of nettle have been examined by leading research institutions. The research has uncovered powerful benefits for the human body.

What is Nettle and Where You Can Find Them

Nettle begins to pop up early in the spring. It is found nearly everywhere in North America. Sunny areas with rich, moist soil are the best habitats for nettle. Nettle grows on the edges of farm field that have been cultivated and along fence rows, ditches, lakes, streams, and rivers.

Stinging nettle grows in dense clusters. The stalk reaches heights of five to eight feet at maturity. The leaves are approximately two to five inches in length and have jagged edges. Opposing pairs of leaves grow on the upper half of the stalks, The leaves have pointed times, indented veins, and a heart-shaped base. The small ‘hairs’ on the stalks and stems produce the sting associated with nettle. The heart-shaped leaves are smaller and have a purple hue when plants are young. The leaves of mature plants are longer and appear very green.

The best time to harvest nettle is the first few weeks after popping up, when it is less than a foot tall. The top two or three leaf pairs are the most tender. Nettle can be harvested into the summer. Keep in mind, that stems and stalks are not as tender as the leaves. They are very fibrous.

Why Is the Plant Called Stinging Nettle

Tiny hollow hairs, called trichomes, cover stinging nettles. The fragile silica tips are broken when they are brushed. They act like needles that pierce the skin, and cause an injection of nettle ‘venom.’ At first, researchers believed the pain was caused by formic acid, but now feel the concentration is too low to inflict pain. Serotonin, acetylcholine, and histamine are currently believed to be responsible for inflammation and pain. Some nettle contains oxalic and tartaric acid that are linked with extending the pain duration.

Serotonin is referred to as the ‘happy hormone.’ It is an irritant when injected via stinging nettles. Acetylcholine is a neurotransmitter that has a similar effect. Histamine causes pain and inflammation.

The University of Maryland Medical Center has published information about stinging nettle. The following are benefits this source tells us stinging nettle provides.It may seem to be an exaggeration that a prickly green herb is a remedy for nearly everything that ails a person, but stinging nettle comes close to fitting the bill. It has been used for a long list of conditions that include:

Nettle plants are used for both food and medicinal purpose. The prickly plant is highly nutritious. It is often used as a tonic in the spring of the year. Nettle is gentle and stimulating to the lymph system. It removes metabolic wastes and promotes excretion through the kidneys. All parts of nettle plants are used.

High amounts of iron that combat anemia and fatigue are found in nettle. Iron supports the female hormonal system and the liver. Pregnant women sometimes use stinging nettle to protect against bleeding and to strengthen the fetus. Some health care providers advise against nettle for pregnant women. Milk production is promoted in nursing mothers. PMS symptoms are reduced; estrogen is processed in the relief of menopausal symptoms; excess menstrual flow is curbed. Nettle is frequently used in herbal tonics to regulate menstrual flow and remove fibroids.

As a hair rinse, it is a scalp stimulant that restores the original color and regenerates hair growth. Nettle works as a scalp conditioner and relieves dandruff.When used as a mouth rinse, nettle prevents plaque and reduces gingivitis. A remedy for night time urination in children is made from nettle roots. Parasites and intestinal worms are destroyed. The endocrine system that includes the pancreas, spleen and thyroid are supported.

What Are the Common Medicinal Uses of Stinging Nettle?

The painful symptoms of tendonitis, fibromyalgia, rheumatism, and gout are treated with nettle leaves. Patients who have auto-immune disorders such as lupus experience relief when they drink a cup of tea made from nettle or eat stewed nettle leaves every day. The diuretic action of nettle alkalizes uric acid and releases it from gout patients’ joints and eliminates pain.

Homeopathic remedies and herbal treatments are made from stinging nettle for allergy relief for people who suffer from hives, asthma, and other allergic dermatitis. Nettles reduce an enlarged prostate and act as a pelvic decongestant. Acne and eczema are relieved by nettle tea. When topically applied, it relieves nettle rash itch and removes warts.

Digestive tract system symptoms such as colitis, nausea, excess gas, and acid reflux are reduced. The medicinal action of nettle on mucous membranes makes for herbal treatments that are effective on mouth sores, nose bleeds, swollen hemorrhoids, and sore throats.TB, COPD, bronchitis, coughing, and chest congestion are relieved. It is helpful in treating Alzheimer’s. Relief from neurological disorders such as sciatica, ALS, and MS is provided.

Who Should Take Stinging Nettle

Stinging nettle has an extensive history of use. It was primarily used as a laxative and diuretic in the time of the ancient Greeks. Anyone suffering from the conditions mentioned above may find the use of stinging nettle beneficial.

People take stinging nettle in an attempt to treat health problems. People have used it as a diuretic. Nettle causes the body to shed excess water in the urine. The root of stinging nettle is used for urinary problems such as an irritable bladder, inability to urinate, painful urination,and too frequent urination.

Some people use parts of the nettle plant that grow above ground for internal bleeding, anemia, poor circulation, dysentery, anti-aging, ‘blood purification,’ and wound healing. Young stinging nettle leaves are cooked and served as a vegetable.

Is Stinging Nettle Safe for Consumption? Does It Have any Side Effects?

Using herbs is an approach that is time-honored to treat diseases and strengthen the body. Herbs have been known to trigger side effects and interact with other substances. Herbs should be taken under the supervision and care of health care providers.

When used as directed, stinging nettle is considered safe in most instances. Occasional side effects include rash or hives, diarrhea, sweating, fluid retention, and mild upset stomach. Handle nettle carefully, because it sometimes causes an allergic rash. Never apply it to an open wound.

Because of its effects on the menstrual cycle, it has the potential to cause a miscarriage. Pregnant women avoid using nettle. Self-diagnosed treatment for BPH is contrary to receiving a diagnosis from a doctor that rules out prostate cancer.

Some evidence suggests stinging nettle raises blood sugar and interferences with diabetes management. It may also lower blood sugar. Diabetics, using nettle, need to closely monitor their blood sugar. Patients with bladder or kidney issues need to talk with their health care provider about the diuretic effects of nettle.

What Are the Ways You Can Use Stinging Nettle?

Nettles are packed with healthy benefits. They purify the blood and detoxify the body. They contain minerals such as magnesium and iron and Vitamins C and E. Nettle should be boiled in a little water to remove the stinging effect before using it.

Nettle hair rinses are a way to add strength and shine to hair naturally. Rinses are made like herb infusions. When the water cools, filter it well to remove nettle bits. Use a rinse after washing and conditioning as usual. Either rinse again after 20 minutes or let the solution remain in the hair until the next washing.

How to Treat a Stinging Nettle Sting

Avoid touching the area for ten minutes. Pour fresh water over the affected area. The plant’s chemical irritants dry on the skin surface and can be removed with soap and water. By avoiding touching or rubbing at first, chemicals are not embedded further in the skin. The painful reaction lasts longer when pushed into the skin. After ten minutes, wash with soap and water to clean the affected area and remove chemicals released by the nettle. Often the pain goes away or is greatly reduced after the area is washed.

If soap and water are not available, use a clean cloth to remove plant debris and dirt until the area can be thoroughly cleaned. Lightly apply tape, such as duct tape, to the affected area, then remove it. Remaining fibers lodged in the skin will be removed. Wax hair removal can remove unwanted plant material if tape does not remove it. Let a layer of wax removal dry for five minutes, then remove the plant debris by gently peeling off the wax.

Looking for a good multivitamin? Check out the Top 7 Brands of Multivitamin here