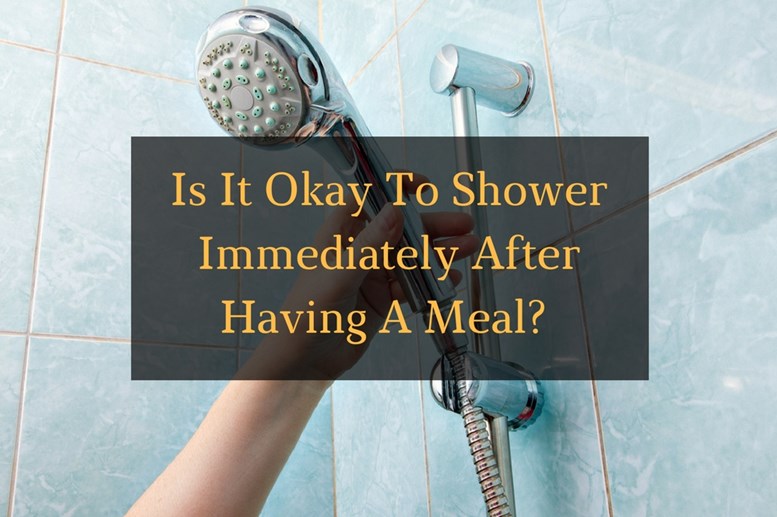 At least once in our lives, we have been told by either our mothers or grandmothers not to take a bath right after eating. According to them, we would be putting ourselves at risk of acquiring health problems, especially within our gut area, if we did. There are different versions of it, actually. Some versions say you have to wait at least thirty minutes after a meal before hitting the shower. Others say you have to wait longer, like an hour or two. Perhaps you’ve even heard of one version that says taking a bath after a meal would give you side sickness, or properly known as appendicitis. But, what’s the deal, really? Is there really a scientific explanation to this idea, or is it pure superstition or old wives’ tale?

So, here’s the theory about this long held belief. Since our stomach is full right after eating, it needs to rest for at least half an hour. If we engage ourselves in any activity such as taking a bath immediately after eating, we may be putting ourselves in danger of having stomach issues, such as abdominal pains, cramps, or even indigestion. Perhaps just like other people, you’ve also asked your folks the reason behind this theory, and perhaps like their folks, your folks probably didn’t give you any explanation. For them, it just doesn’t make sense to head to the shower directly after a nice breakfast, or a nice lunch or dinner. Fast forward to the present day, and now you’ll see myriads of so-called “scientific” explanations to this belief.

One of the most common theories suggests that when you take a bath, your body’s surface temperature changes and levels with the temperature of the water you’re using, and that whether it’s hot or cold. As your skin comes in contact with the water, your brain takes it as an immediate need for blood to be directed to your skin and bring your body’s temperature back to equilibrium. This can disrupt the digestion process, because in theory, your body must be directing a full supply of blood to your digestive system in order for the food you’ve just had to be processed properly. The problem with this theory is that it would mean you wouldn’t be able to do any activity at all, because now, your body won’t be able to supply enough blood for you to perform other activities aside from digesting food. That would mean extended lunch breaks, which would also mean unproductivity at work. And if you’re going to have steak or something similar for your next meal, prepare to spend the next 2 days digesting.

To be fair with some of the popular explanations we hear or read about nowadays, our digestive system does need a high amount of energy and blood flow when it’s digesting food in order for it to function efficiently. Blood actually flows to all parts of the body. Its main job is to deliver oxygen to the cells, which the cells use to produce energy. When we eat, our stomach works churning the food into pieces for a period of 4 hours, or sometimes 5, depending on what we’ve eaten. It then pushes the food down to the small intestines, which breaks down the food further into tinier pieces in order for it to be useful for the body. This process requires a huge amount of energy and flow of blood. This means there’s lesser supply of blood to other parts of the body such as the brain, and that is actually one of the reasons that we feel sleepy right after eating a heavy meal. Furthermore, scientifically speaking, what eating does to our body is it stimulates our parasympathetic nervous system. This leads to the release of tryptophan and serotonin, which results to the tiredness and drowsiness we feel after eating.

Now, regarding the theory that bathing disrupts the process of which blood flows to the digestive system when it’s doing its job, the human body actually is capable of what we call “thermoregulation.” This is the process allowing the body to retain its core internal temperature. This mechanism is designed to make sure your body can return to homeostasis or a state of stable equilibrium. This means that regardless of the temperature your skin is exposed to right after eating, it will have very little effect to how blood flows to your gut to help your digestive system break down properly what you have eaten.

There Are Factors To Consider

There are actually several factors involved here, so the theory that bathing right after a heavy meal is bad for the health because there’s not enough blood for you to use for other activities other than digesting food is not completely correct. It’s not incorrect either, because as mentioned earlier, the digestive system does require maximum blood flow in order for it to work properly during digestion. However, it would be safer to say that we should consider several different variables before making a conclusion. Your age, for instance, plays a huge role in determining how efficient your digestive system functions. If you’re young, your digestive system is most probably still in top condition, which means it would be highly unlikely for you to suffer from digestive problems simply by taking a bath after a meal.

On the other hand, if you’re a bit older, your digestive system has probably grown weak over the years. In that case, any form of activity, such as taking a bath after a meal, for instance, may lead to a little bit of discomfort. We should also factor in the amount of food eaten. The larger the amount of food, the harder the digestive system will have to work to properly digest it. Now, if you’re going to take a bath after eating a very large meal, there’s a chance you might get a bad stomach. Meanwhile, there would be nothing to worry about if you only ate moderately before taking a shower. One last factor to consider is the overall health of your gut. Obviously, if you know you have a weak digestive system, you would want to take it slowly right after having a meal, and waiting at least thirty minutes to engage in any form of activity that might lead you an upset stomach. Also, for people who are very ill, there is a chance that the exertion of taking a bath right after meal can trigger some problems.

That said, it’s important to consider your overall health before doing anything right after eating. If you are generally healthy, it seems that there is really no need to worry about it that much. Of course, common sense tells you that you will also have to limit your activities when your stomach is full. But, if we’re talking about an activity such as bathing that’s more relaxing than requiring a lot of physical exertion, then there’s no reason to think that it’s going to do you more harm than good. So, the next time you get an upset stomach after taking a bath following a meal, it’s mostly likely because you have a weak or weakened digestive system, that’s all.

Many of the popular beliefs that have been passed down to us by our parents or grandparents actually have some science behind them. They probably just didn’t know exactly how to explain to us how things worked. Or, perhaps there’s no scientific evidence to back up their claim at all. We just hope that one way or another, this article has given you the enlightenment you needed.