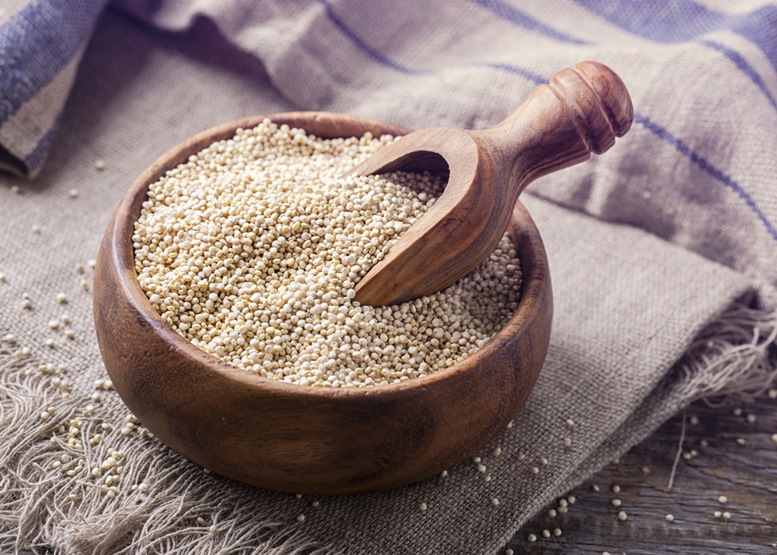 Quinoa (Chenopodium quinoa) is an ancient crop that grows in a wide range in the South America for 4,000 years. Together with buckwheat and amaranth, they are three most common pseudocereals that people still eat today. Quinoa used to be a poor people’s crop but now label as a “super food” due to the renewed interest in pseudocereals because of the outstanding protein quality of this small grain. Quinoa is a very nutritional and delicious grain that has the exceptionally attractive amount of balanced amino acids profiles, rich content of minerals, omega-3 and 6 fatty acids, fibre and B-vitamins.

There are many ways to enjoy quinoa, in forms of whole grain, flakes or flour. It can be eaten as a rice replacement, a hot breakfast cereal, and popped like popcorn. Quinoa can be ground and used as flour. Quinoa flour is normally mixed with maize or wheat flour for making bread, noodle, pasta and biscuit. Products made with drum-dried or extruded quinoa flour have even better sensorial and nutritional quality. Quinoa seed can be boiled in water to produce infant cereal food. Quinoa is also used to replace soybean in making good-quality tempeh. Moreover, quinoa is a gluten-free grain which provides a nutritional, economical, easy-to-prepare, flavorful food source for people with gluten intolerance. 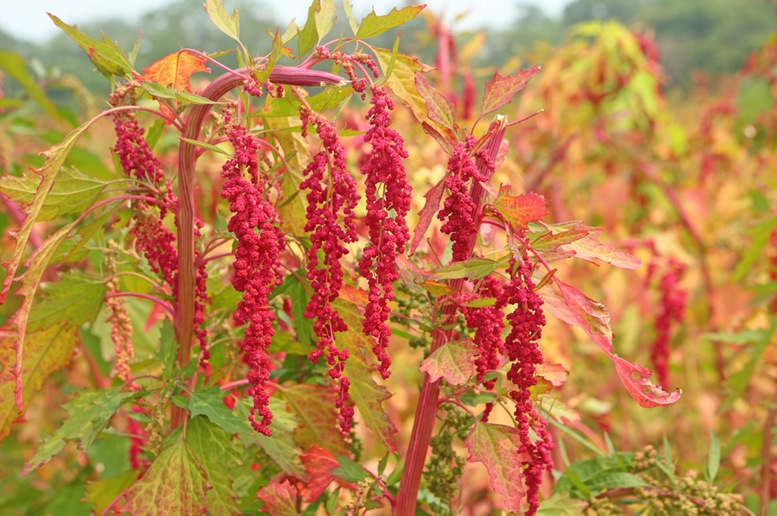 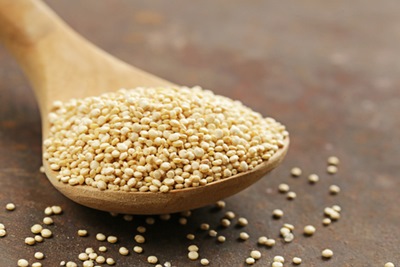 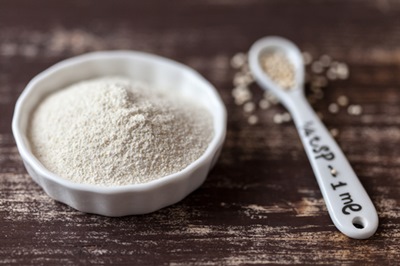 The lack of amino acid lysine is a major concern for most of the cereal grains. In contrast, the protein isolate from quinoa resembles cow’s milk protein in quality. The Food and Agriculture Organization (FAO) suggests that quinoa is closer to the ideal protein balance than any other grains. The protein content in quinoa grains ranges from 7.5% to 23% with an average of 15%. The proteins are high in lysine (5.15-6.4%) and methionine than any other cereals. According to the FAO, quinoa protein can supply around 180% of the histidine, 274% of the isoleucine, 338% of the lysine, 212% of the methionine and cysteine, 320% of the phenylalanine and tyrosine, 331% of the threonine, 228% of the tryptophan and 323% of the valine recommend in protein sources for adult nutrition.

The major type of protein in quinoa is chenopodium contains mainly albumins and globulins and has litter prolamines. For this reason, quinoa is used in the gluten-free diet. Furthermore, the high amount of essential Sulphur-containing amino acids, methionine and cysteine, are particularly important for vegetarian diets. Hence, a supplement of cereal grain with quinoa can effectively enhance the protein quality of resultant products.

Quinoa is a rich source of essential fatty acids. In fact, quinoa seed lipids contain the largest amount of neutral lipids among all the seed fractions analyzed. Quinoa is particularly high in linoleic and linolenic acids, two unsaturated fatty acids. The ratio of polyunsaturated to saturated fatty acids of quinoa is 4.9 which is higher than most edible oils, such as soya bean oil, corn oil and even olive oil. Linoleic acid (omega-6 fatty acid) is the most abundant fatty acid in quinoa, which is about 50% of the total fatty acids in quinoa. The level of linolenic acid (omega-3 fatty acid) in quinoa seed is 3.9%. The relatively high content of linolenic acid in quinoa indicates an excellent nutritional quality of the seed.

Quinoa is a great source of vitamins and minerals. It contains more calcium, magnesium, iron and zinc than any other common cereals. One serving of quinoa provides us 48% of our daily recommended intake of magnesium. The iron level is particularly high in quinoa (81 mg/kg) that one cup of quinoa provides 8% daily value of iron. In addition to minerals, quinoa seed is a recommend dietary source of vitamin B, C and E. It contains more riboflavin (VB2) and alpha-tocopherol (VE) than rice, barley or wheat. The rich content of vitamin B6 in quinoa strengthens the immune system and support nerve system function. Overall, quinoa satisfies the requirements for most vitamins recommended by the daily allowance.

Quinoa seed is an excellent source of antioxidants. The unsaturated fatty acids, polyphenols, tocopherols and carotenoids are the main contributors to the antioxidant activity of quinoa. There are two unique polyphenols in quinoa that carries strong antioxidant activity, i.e. quercetin and kaempferol. In fact, quinoa is one of the foods that contains the highest amount of quercetin, which is even higher than cranberries. They do not only prevent oxidative damages to our cells and DNA but also acts as a chemopreventive agent that inhibit cancer cell growth. The antioxidant activity of quinoa seed could be even further boosted by sprouting them.

Chemical structure of quercetin and kaemopferol.

The dietary fibre of quinoa is mainly located in the hull. The total fiber content of quinoa is about 2% of the dry matter, similar to common grains and leguminous seeds. Quinoa has two times the amount of dietary fibre than white rice. More than 80% of the fiber is insoluble fiber which is critical for maintaining the health of our digestive system (e.g. increase the bowel movement and add to the bulk of stools). For people trying to lose weight, quinoa is a perfect choice, Its rich fiber content increases your satiety without adding more calories.

Good glycemic control is especially important for people with diabetics. Quinoa has a hypoglycemic effect and has been recommended as an alternative to the traditional rice or wheat diet for the diabetic patients. Firstly, quinoa is a low glycemic index (GI) food with a value between 35 and 53, depending on the cooking methods. The special polyphenol, quercetin, demonstrates an inhibitory effect on the amylase and glucosidase activities, which are two major enzymes participate in the breakdown of starch into readily available glucose. Furthermore, the dietary fiber of quinoa increases the viscosity of the digesta which slows down the stomach emptying and intestinal glucose absorption.

Consumption of quinoa has shown to reduce the level of inflammation markers in postmenopausal women who consumed quinoa flakes for 4 weeks. There are a group of compounds that contribute to the anti-inflammatory effect of quinoa: polyphenols, saponins, omega-3 fatty acids, apron betanins, fatty acids, selenium and vitamin E. Prevent the onset of chronic inflammation in our body is critical to keep the chronic diseases and cancer at bay.

The high content of linolenic acid of quinoa makes it a super food to maintain our heart health. Linolenic acid is known to reduce blood cholesterol and blood pressure which are main factors in influencing our cardiovascular system performance. An increased intake of the healthy unsaturated fatty acids is shown as an effective way to reduce the risk of chronic cardiovascular diseases. In addition, quinoa is rich in polyphenols, the quercetin, which also contribute to reducing the oxidation of lipoprotein and prevent the formation of atherosclerosis. The anti-inflammation effect of quinoa also lessens the the damage to the blood vessel.

Side effects of eating too much quinoa 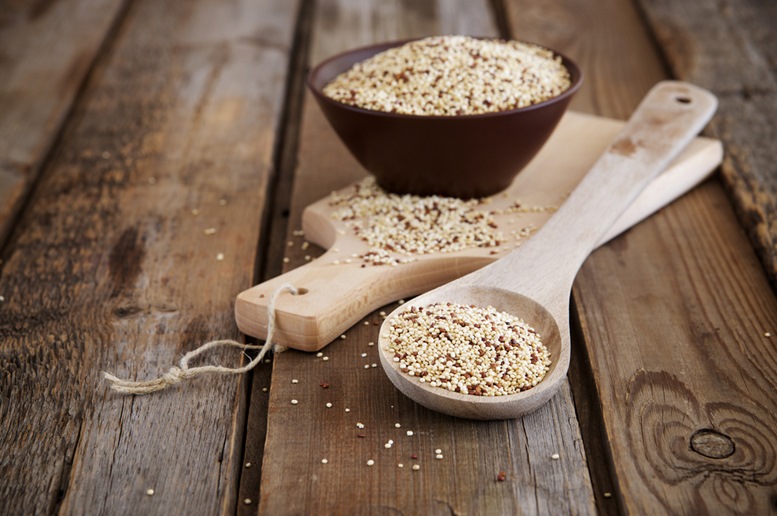 Quinoa is a functional food that promotes our health when consumed at a moderate amount. However, excessive consumption of quinoa might cause adverse effects, especially in people with special medical conditions. 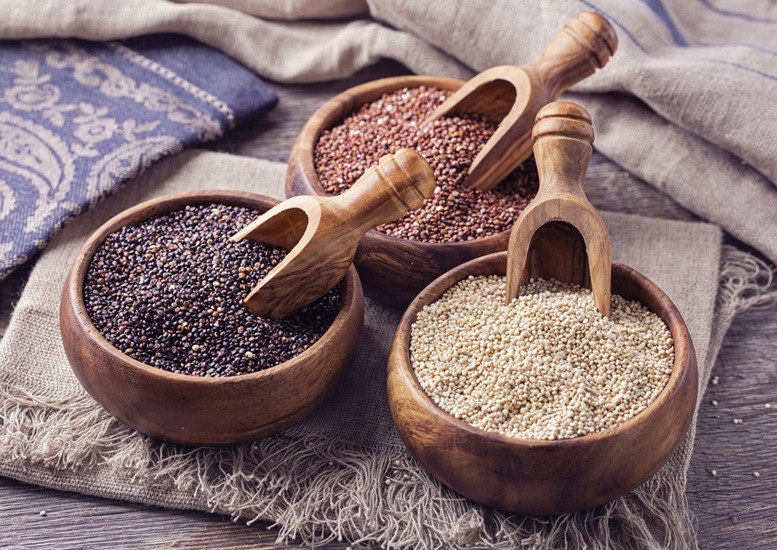 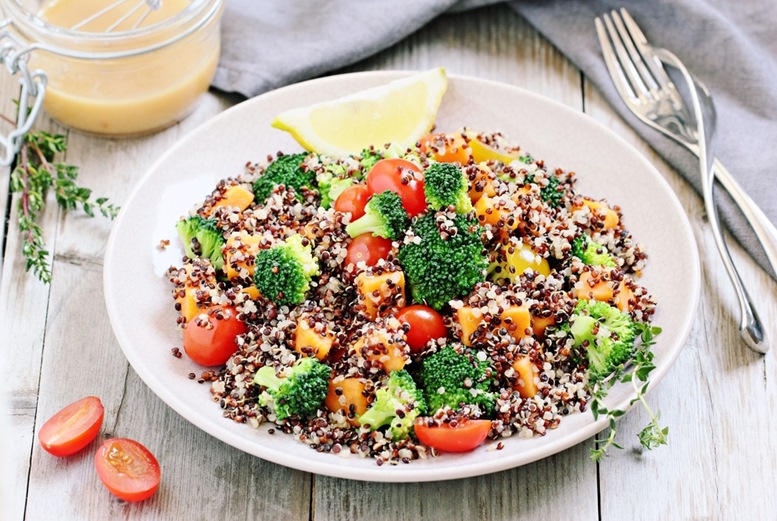 For every 100 g of cooked quinoa, you will get the following macro- and micro-nutrients: 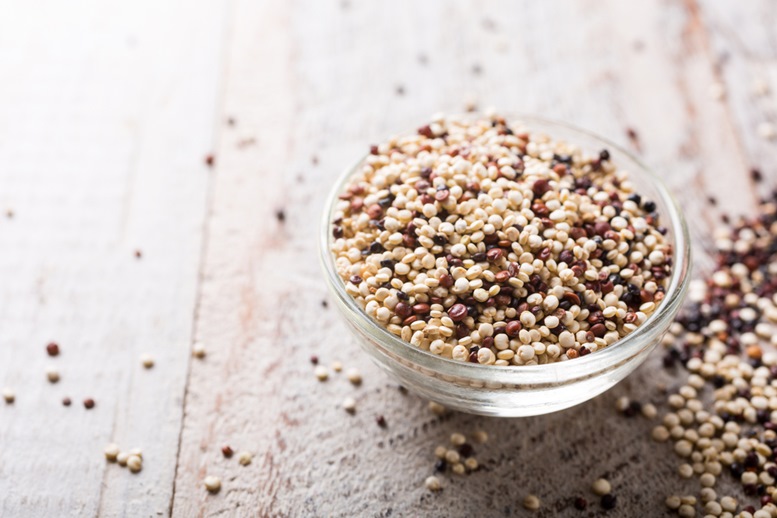 Cultivation of quinoa originated from Andes region near Lake Titicaca in Peru and Bolivia since 3000 B.C. It was the second most important crop in the Inca Empire time, only less prominent than the maize. Quinoa is so vital that it was considered as sacred food by the Incas. The name of quinoa means chisiya mama or ‘mother grain’ in the language of Incas. Sadly, the cultivation of quinoa vanished wherever Europeans have settled in the Southern American continent. It was replaced by the plantation of wheat, rye and oat which were introduced by the Europeans.

Quinoa is mainly grown in the South American region between 20°N in Columbia to 40°S in Chile, and from sea level to an altitude of 3800 m. In the 1970s, the Colombia, Chile, Peru, Bolivia and Ecuador were the major quinoa producers, where quinoa is grown mainly in the backyard, filed margins and as an intercrop. In the 1980s, quinoa was introduced to Europe, North America, Asia and Africa. Currently, quinoa cultivation remains relatively small. Based on the FAO 2009 official report, the annual production of quinoa in the Andean countries was 70,000 tons.The production was 34,000 tons in Peru, 26,800 tons in Bolivia and 690 tons in Ecuador. Bolivia and Peru are the largest exporters with 88% of the worldwide production. The increasing demand for quinoa as a health food/functional food has resulted in the higher prices of quinoa and helps farmers in the Andean countries. 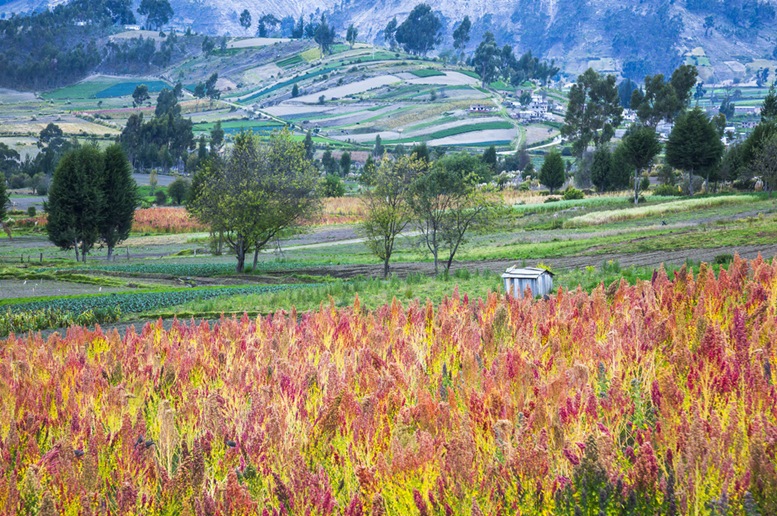 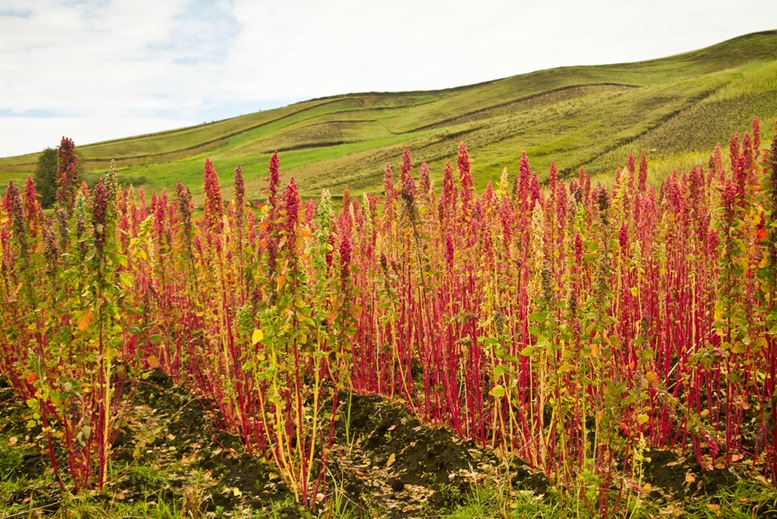 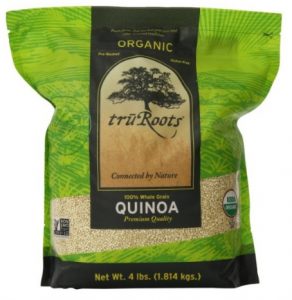 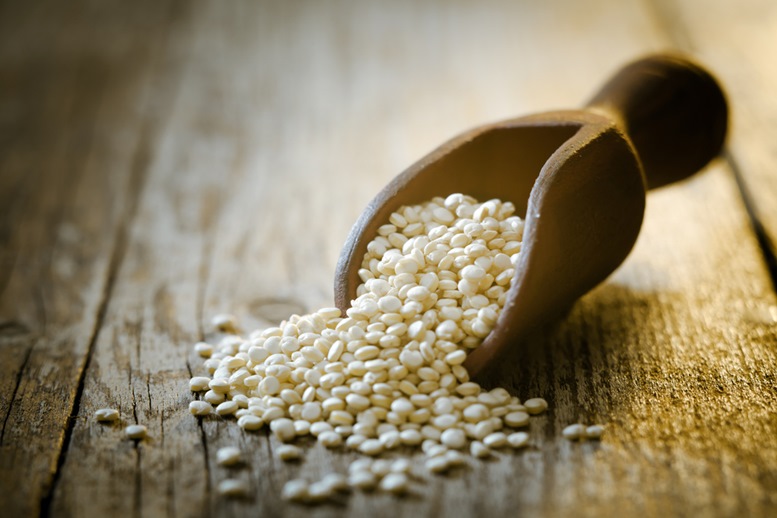