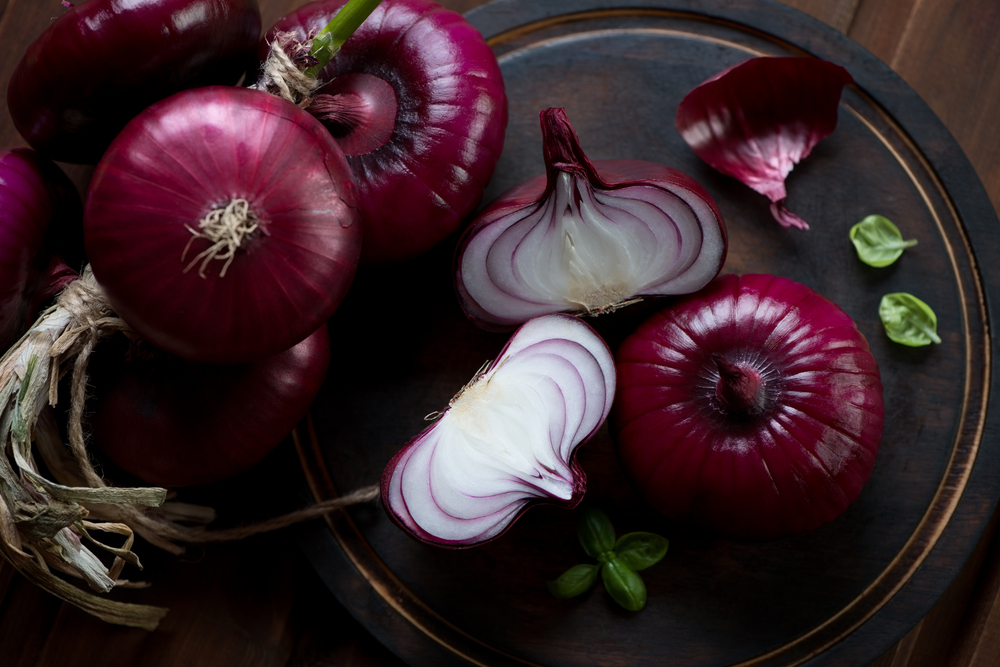 Onions have been around for a very long time. It is said that the onion plant originated in either Central Asia or in West Pakistan some 5,500 years ago and eventually spread to all parts of the world. Unlike with other plants, modern scientists are unable to determine where and when exactly the onion originated because its cultivation does not leave much trace. However, written historical records tell us quite a bit about this amazing plant which dates back to 3,500 A.D. 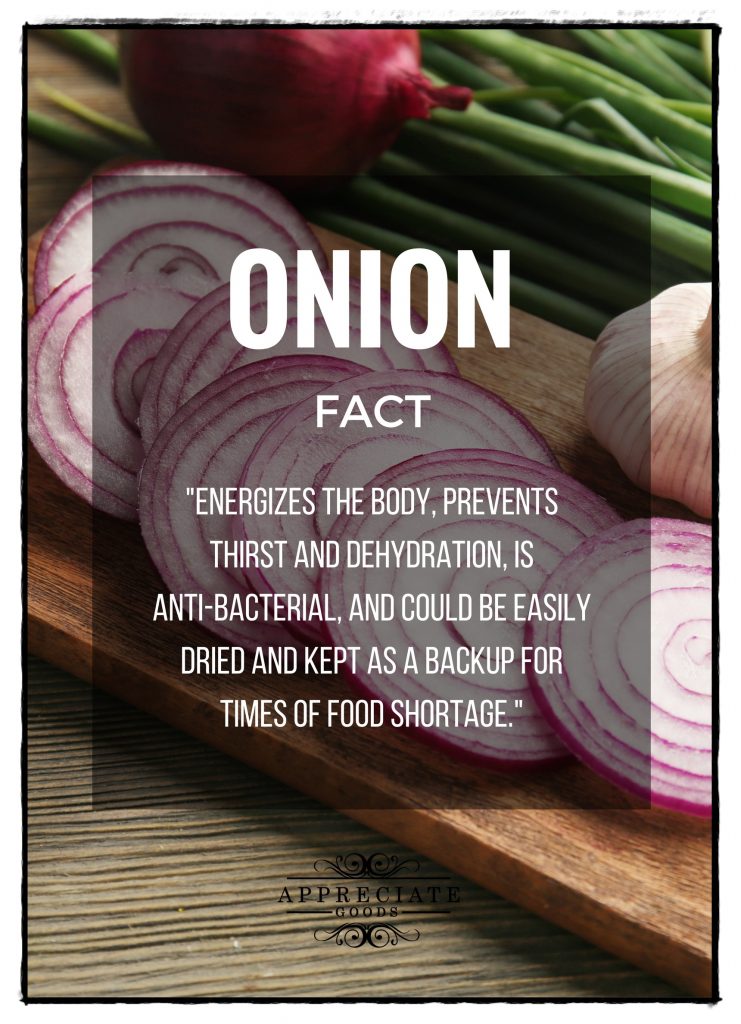 Since ancient times, civilization has been very dependent on onions. Not only onions are easy to grow on different kinds of soils, they were easily stored, preserved and they could also endure any type of weather, which meant people could have onions all year around – even during the winter. People quickly realized the onions’ amazing benefits – energizes the body, prevents thirst and dehydration, is anti-bacterial, and could be easily dried and kept as a backup for times of food shortage.

Soon, several ancient civilizations were also incorporating this vegetable into their religious ceremonies. For example, the Egyptians considered the onion to be a symbol of eternity and immortality and used them in their mummification rituals, where they would leave onions on the eyes, pelvic regions, attached to the soles of the feet, or kept flat against the ears of the mummified body. Some Egyptologist theorists think that the belief behind this ritual may have been that the onion’s strong scent and miraculous powers could bring the dead back to life. They also included onions in funerals, especially those of Pharoahs.

Other civilizations also used onions heavily – India used onions as medicine, using to make remedies for heart diseases, indigestion, joint pain and others. Similarly, in Ancient Greece, soldiers, athletes and healers alike used the vegetable, for strength and as medicine; they either had it raw, cooked or juiced, depending on usage. The Romans consumed large amounts of onions and used to carry it with them when they traveled, which is thought to have contributed to the spread of onions around the world.

Once the Roman Empire collapsed and Europe entered its Dark Ages, food became scarce and the main foods that were consumed were comprised of mostly lentils and beans, cabbage, and onions. Onions during that period became even more valuable than coin as people relied on it heavily as both food and medicine. Eventually, new trade routes were developed and the onion was introduced to all parts of the world where it was accepted very easily due to its flexible nature in terms of cultivation, and its numerous benefits. Some even say that the onion was the first ever vegetable planted on North American soil by the first colonists who arrived there. 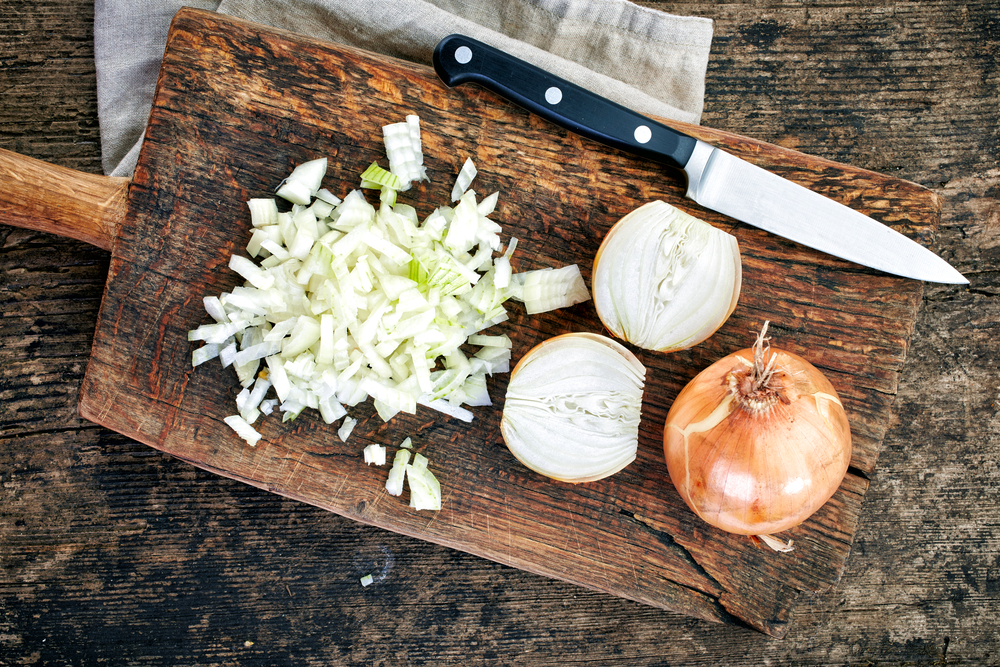 Is it Better to Eat Onion Raw or Cooked?

You can get the most benefits from onions when raw, as they are most active in that state. When cooked, its organic sulphur compounds  which provide important health benefits deteriorate.

Raw onions are not for everyone, though, as its strong and sometimes bitter taste can make it difficult to stomach. In addition, raw onion juices can become irritant and cause acidity for some people. If you are one of them, don’t fret because there are other ways to enjoy onion’s health benefits without having to worry about the strong taste. For example, baking whole onions retains its nutrients inside and softens it, and at the same time gives it a more flavorful, aromatic taste than consuming it raw.

Many microorganisms exist in us and around us, some of which can impact our health negatively. Onions contain anti-microbial characteristics which hinder the growth of bacteria and other harmful bodies, keeping our bodies strong and healthy.

Onions have been proven to lower blood sugar levels caused by diabetes; the chromium content in onions reduces insulin levels and corrects glucose tolerance in the body over time. It is also said that eating raw onions can help in managing type 1 and 2 Diabetes.

Numerous studies have confirmed that onions strengthen bones and protect them against deterioration, as well as increases their density, especially in women.

The anti-microbial and anti-inflammatory properties of onions can create a preventive barrier against several types of cancer diseases, such as stomach, breast, and colon cancers.

Onion is the best remedy for the common cold and flu. Consuming its juice helps clear the nasal pipe and dispels congestion.

Both raw and cooked onions are an effective remedy for high blood pressure.

Eating onions, especially raw, can increase blood flow and causes the sweat glands to secrete, which is beneficial in preventing influenza, fever, and colds during winter time. Onions are also rich in Vitamin C and phytochemicals, both which increase immunity.

Curing anemia through onions is possible too – they contain a large quantity of natural iron which helps anemic patients by increasing the blood platelet count.

Raw onion is an excellent dietary addition for people with heart problems and high cholesterol levels. Having only half an onion every day helps lower cholesterol levels over time, as well as prevent heart attacks.

The nutrients in onions promote hair growth.It’s the perfect remedy for baldness! It can be applied as a juice to the scalp and costs pennies in comparison to expensive hair products.

Onions are an excellent source of fiber which helps move food and waste easily through the digestive and intestinal tracts. It helps with severe constipation and gas and improves our overall health and wellbeing.

By adding some onion juice to a piece of cotton and placing the cotton in the ear, we can eliminate the phenomena of “ear-ringing” and other ear ailments. This was a traditional remedy used by early civilizations.

Onions improve our respiratory health by clearing the throat and lungs, as well as reducing the occurrences of asthma attacks. It also lowers the risk of lung cancer, particularly in smokers.

This vegetable is a great addition to your daily diet, being high in several nutrients and vitamins which provide numerous health benefits: Vitamins B and C, cholesterol, sodium, fiber, sulphur, potassium and calcium.

Having onion every day can ward off insomnia and other sleeping problems.

Onions’ anti-inflammatory properties can cure arthritis that causes pain in the joints, and other body injuries and pains.

Onions have been used since ancient times for skin care. A good remedy for skin pigmentation or removing dark marks on the skin is to apply onion juice directly on the affected area. It is also effective in eliminating certain types of skin moles.

Strangely enough, onions are also used to remedy eyesight and other eye problems. People have used onion juice as eye drops for infants to strengthen their vision.

Black onion seeds are a natural treatment for epilepsy. It can decrease the occurrence of epileptic seizures in children as it has anti-convulsive characteristics.

Anti-oxidant elements (Vitamins A, C and E) and sulphur phytochemicals in onions prevent damage caused by ultraviolet rays and fights free radicals that can cause the skin to age early.

Onions are anti-biotic and provide quick relief and healing of inflamed cuts and wounds, as well as helps relief of fevers and the common cold.

Consuming onions in its raw form before the beginning of the menstrual cycle can help regulate the cycle and cure other menstrual problems.

Having a few bites of raw onion in the morning can rejuvenate your body tissues and leave you feeling refreshed. Its vitamin content, as well as energizing properties, provide an energy pump that can last all day. 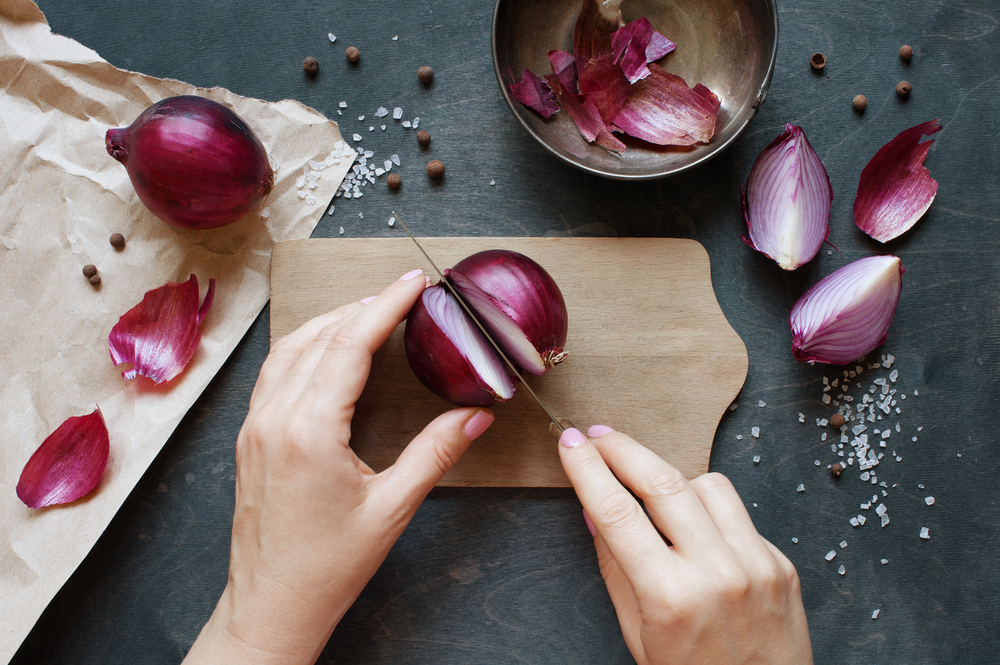 Potential Side Effects of Eating too Much Onion

Too much onion can cause gastrointestinal disorders, such as nausea, vomiting, and gastric inflammation, among others.

Uncontrolled consumption of onion can severely reduce your blood pressure and cause complications.

Having too much onion can be irritant, and cause heartburn and is especially dangerous for people who already have serious heart problems. Also, heartburn is a common occurrence during pregnancy, so it is advisable for pregnant women to limit their consumption of onions during this sensitive period.

One of the onions’ health benefits is to reduce blood sugar levels in patients with Diabetes. However, in certain cases, the decrease can be severe and life-endangering. It is important for diabetics to monitor their blood sugar levels regularly if they regularly consume onions, especially in its raw form.

Onions have a strong, pungent flavor due to its high sulphur content, leaving bad breath which can last for hours, even if you brush your teeth!

Onions have anti-coagulant characteristics which can hinder the clotting of blood, and cause blood platelet counts to decrease.

Consuming too much onion can reduce the body’s ability to dispose of excess lithium.

When applied directly to the skin, and especially on the face, onion juice can cause irritation. It’s best to test it on your hand before applying it.

How to Incorporate More Onions into Your Diet

Onions add flavor to everything! There are numerous ways that you can incorporate this rich vegetable into your daily diet. 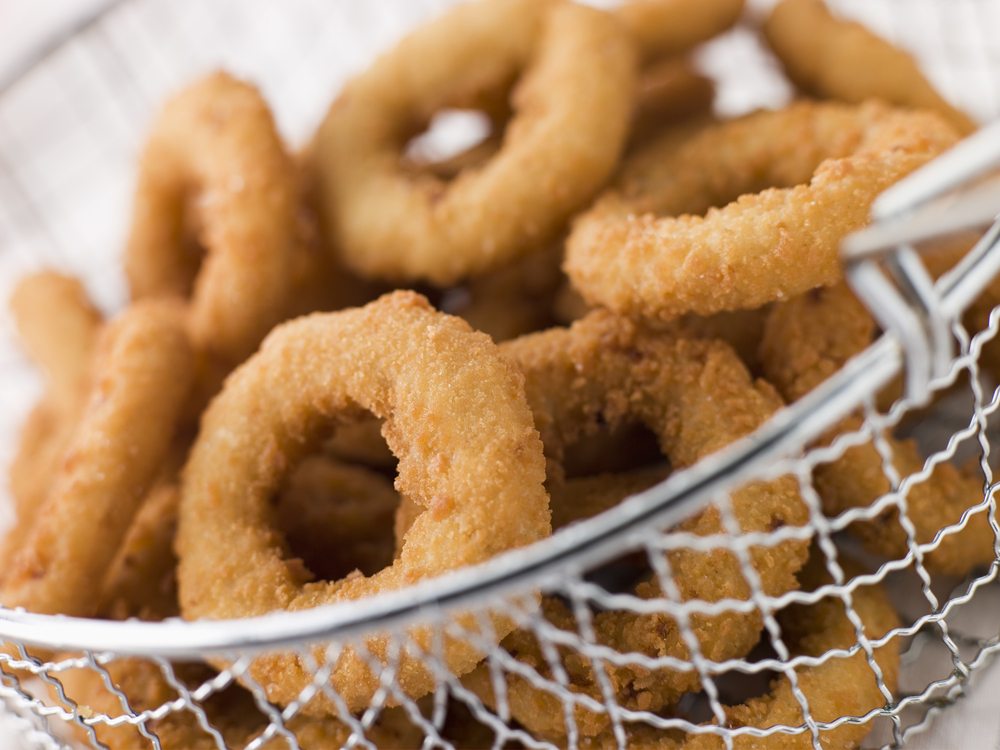 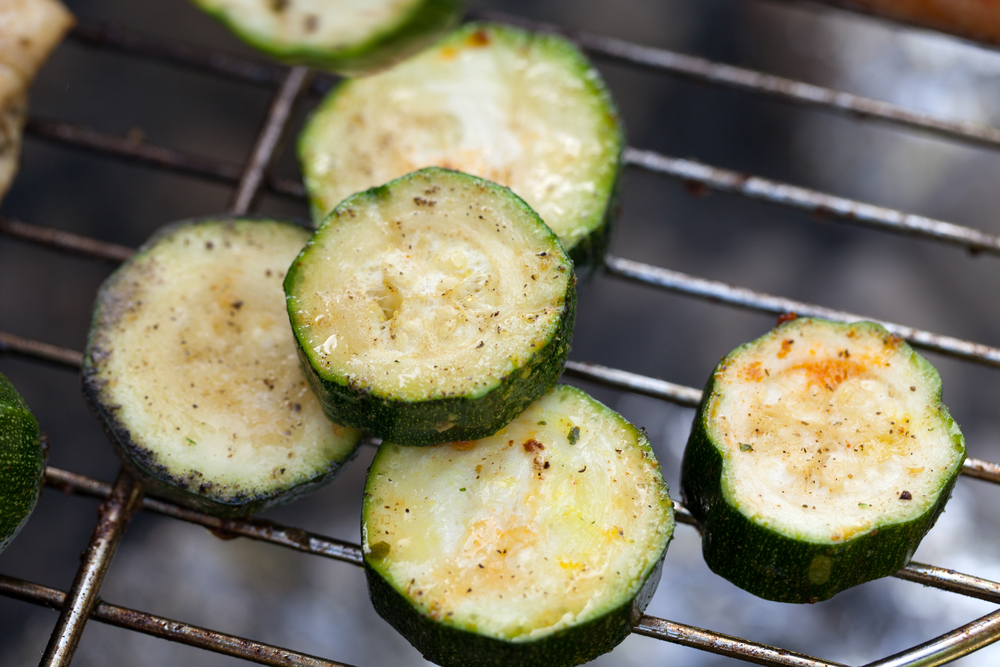 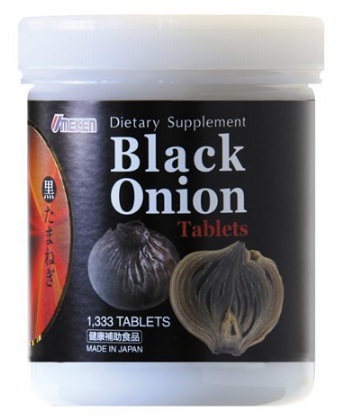