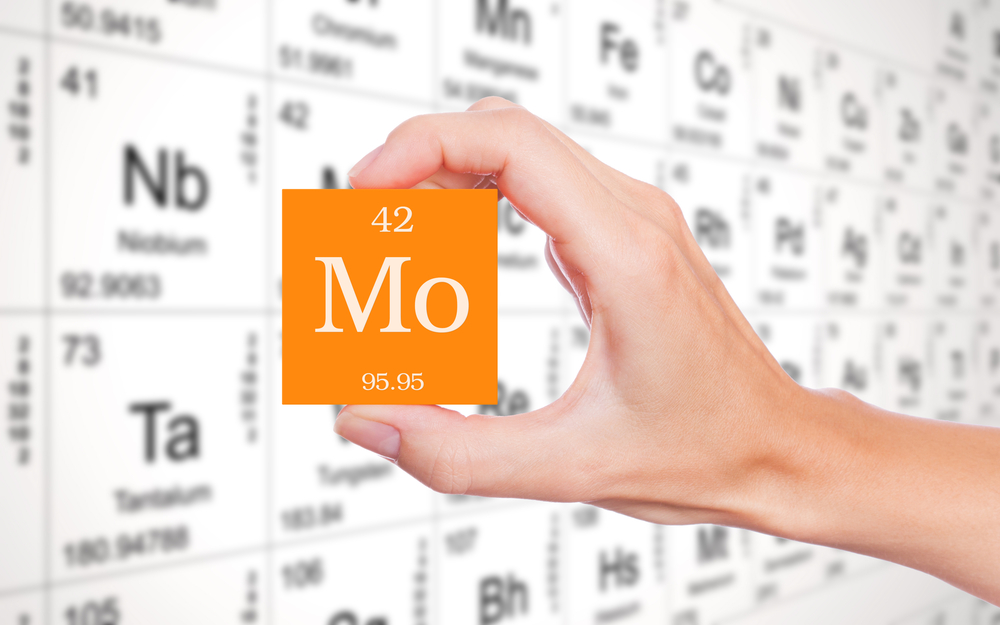 Molybdenum name is derived from Ancient Greek Μόλυβδος molybdos, meaning lead. Its symbol is Mo and atomic number is 42. Molybdenum was discovered 1778 by Carl Wilhelm Scheele. Molybdenum is not found as a free metal on earth; it is found only in various oxidation states in minerals. It is a silvery metal with a gray cast and has the sixth-highest melting point of any element. It is used in steel alloys (Lide, 1994).

Molybdenum is a trace element and an important nutrient required by the human body for overall health. It comes in the category of metallic element and is commonly found in nitrogen-fixing bacteria. Humans require very less concentration of molybdenum, which is easily obtained through a healthy diet. Molybdenum deficiency is very rare in humans, so molybdenum supplements are not in demand as such. Molybdenum plays an important role in the metabolism of iron.

Molybdenum is an essential cofactor of enzymes and plays an important role in biochemical reactions of fats and carbohydrates. Some of the known enzymes of molybdenum are sulfite oxidase which is essential in the metabolism of sulfur amino acids, xanthine oxidase, aldehyde oxidase, purines, and pyrimidines. Molybdenum also possesses antioxidant characteristics. It aids in breaking sulfite toxins stored in the body and therefore combats any allergic reaction (Rajagopalan, 1998).As a trace mineral, molybdenum has several roles in the biological activities that happen regularly, although its exact functions are still being explored and studied. Molybdenum does everything from protecting cells and creating energy to helping vital organs get rid of waste products. 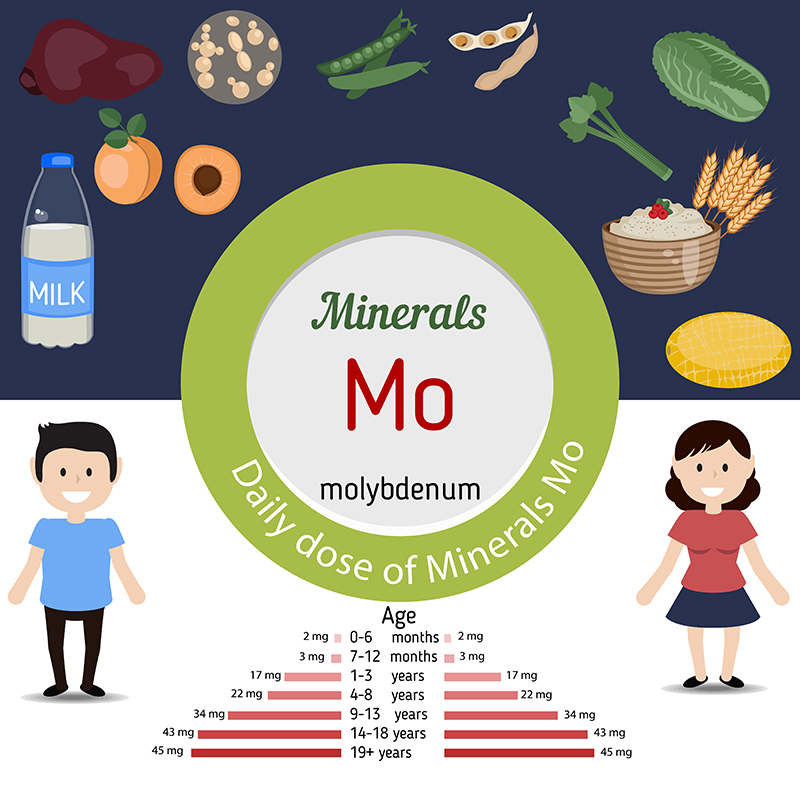 The Recommended Dietary Allowance (RDA) of molybdenum is explained below (Hunt, 2001):

Children between 0- 12 months old, typically receive molybdenum content through human milk. On an average, American adult males have a daily intake of about 109 mcg of molybdenum while women have a daily intake of about 76 mcg, well above the recommended amount. The danger of any toxicity of molybdenum in human beings from food items is quite negligible. The tolerable upper intake level (UL) for adults is 2 mg a day and can happen only by taking supplements without sufficient attention.

Signs and symptoms of molybdenum deficiency

Molybdenum deficiency can be explained as a medical condition caused due to insufficient intake of molybdenum in the diet. Since the percentage of molybdenum required by the body is relatively low, its deficiency rarely happens in the natural environment (Trumbo et al, 2001).

Some of the deficiency symptoms are(Food and Nutrition Board, 2001):

It is also reported that patients suffering from Crohn’s disease have inadequate molybdenum levels in their bodies. Symptoms seen are: accelerated heartbeat, breath shortness, headache, night blindness, poor formation of uric acid in plasma and urine, poor sulfate content in the urine, and elevated levels of Sulfite. Lack of molybdenum is also seen in individuals with a genetic predisposition to poor assimilation of molybdenum in the body.

Genetic sulfite oxidase deficiency was observed in 1967 in a child. It was caused due to the incapability to develop the molybdenum coenzyme despite the presence of sufficient molybdenum. The deficiency led to intellectual impairment, seizures, opisthotonus, and lens dislocation (Johnson et al, 1993).

Various studies have reported that when plants do not have adequate molybdenum levels, they become molybdenum deficit and as a result, nitrosamines are produced, which are cancer producing agents, because, nitrate reductase — an enzyme — can’t function properly in the absence of its molybdenum cofactor. Hence, molybdenum is a vital soil element to combat the growth of cancer-producing agents. An article published in “Cancer Research” in August 1980 reported the outbreak of esophageal cancer in the Taihang Mountain Range area in northern China caused due to the deficiency of molybdenum (Taylor et al, 1994).

Molybdenum helps to jump-start four of your body’s important enzymes. It works as a cofactor for sulfite oxidase, which is required for biochemical activity of sulfur-containing amino acids; xanthine oxidase, which contributes to antioxidant capacity of the blood; aldehyde oxidase, which joins with xanthine oxidase in the metabolism of drugs and toxins; and mitochondrial amidoxime reducing component, which stimulates the removal of certain toxic elements (Coughlan, 2014).

One of the types of molybdenum, Tetrathiomolybdate, having four sulfur atoms, brings down copper levels in the body, making it efficient in treating fibrotic, inflammatory and autoimmune disorders. A research in the “Journal of Inorganic Biochemistry” in May 2006 reported that in animal studies tetrathiomolybdate effectively prevents pulmonary and liver fibrosis (thickening and injuring of tissues), helps inhibit liver damage from acetaminophen and lowers the risk of heart damage from doxorubicin (a bacterial antibiotic). Tetrathiomolybdate also shows a moderate guarding effect against diabetes.

Besides its importance in SO function, molybdenum is also a cofactor for an enzyme called xanthine oxidase (XO). XO plays a role for taking two molecules (called hypoxanthine and xanthine) and aids in converting them into uric acid (UA). There is a clinical condition referred to as “gout,” in which crystals of UA can get stored in the joints and result in pain. Medications used to treat this condition often work by obstructing the activity of XO. Though it’s true that excessive uric acid levels in the body can be harmful, it is equally true that healthy amounts of uric acid are also essential for certain functions in our body. For example, that UA plays a primary role in the total antioxidant capacity of our bloodstream—as important, for example, as vitamins E and C. UA also is a direct antioxidant. These antioxidant functions of UA are actually associated either to diet or to a risk of disease. The lack of research in this area makes it impossible to say whether dietary deficiency of molybdenum might result in problems with UA formation that are accompanied by increased disease risk. It is believed that molybdenum is likely to contribute to antioxidant protection by maintaining proper function of XO and balanced production of UA (Johnson, 1999).

Molybdenum is an important trace mineral. It is found naturally in the human body, in small quantities, and also in certain foods. It is an excellent supplement to protect our body from the effects of Candida overgrowth.Molybdenum is particularly useful during Candida Die-Off when it helps the liver to expel the toxins that are produced when the Candida yeast is killed. Molybdenum helps by converting the acetaldehyde into acetic acid. This can then be excreted from the body like any other toxin. Alternatively, the acetic acid can actually be converted into an enzyme named acetyl coenzyme A, which is actually an essential part of our biochemical activities in the body. Acetaldehyde is also discharged during Candida Die-Off, which is when molybdenum is particularly useful. When our body is undergoing Die-Off and we experience some fatigue and flu-like symptoms, Molybdenum can prove helpful.

Molybdenum is an essential mineral required for the growth and strength of bones.

Molybdenum helps in the preservation of sexual arousal preventing impotence.

Asthma is an allergic response to chemical compounds. Chemical preservatives found in wine and some foods called sulfites result in asthma. Adding molybdenum-containing foods or supplements help improve asthmatic conditions because the mineral functions as a sulfite detoxifier.

Thiomolybdate therapy is used as a promising treatment for a genetic disorder called Wilson’s disease, which causes copper to accumulate and eventually damage liver and brain in the body

Food items rich in molybdenum have been explained below (Tsongas et al, 1980): 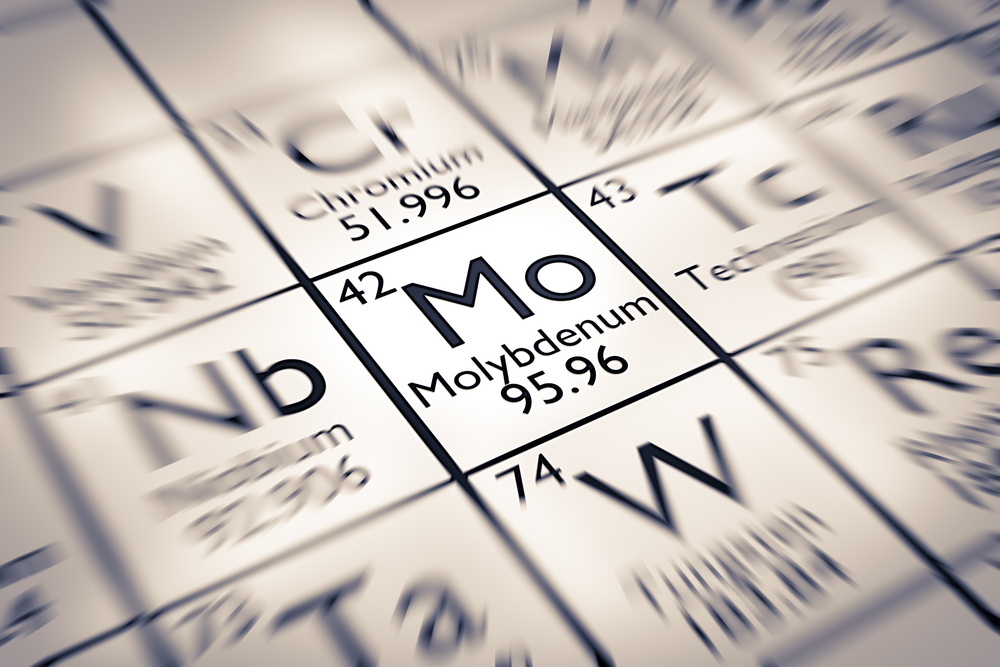 Molybdenum normally is not known to have any toxicity in humans, but excessive levels by consuming molybdenum supplements can have some damaging effects on copper levels by interfering with its absorption. One study reported that increased levels of dietary molybdenum, up to 1,500 mcg, resulted in excessive excretion of copper. However, another study showed no adverse effect of high molybdenum intake via supplements (up to 1,500 mcg per day) on copper levels in humans. Consuming high molybdenum content, however, could in theory lead to copper inadequacy, according to New York University Langone Medical Center. The Center has also warned individuals having serious kidney disorders to consult their doctor before consuming molybdenum or any other supplement (Mendy, 2012).

A human body just requires 45 micrograms of molybdenum every day to meet the recommended dietary allowance set by the Food and Nutrition Board of the Institute of Medicine. Pregnant or breastfeeding women need 50 micrograms. Dosage over 2,000 micrograms every day can prove toxic. It’s highly unlikely that molybdenum levels from diet can cause any toxicity, unless you take molybdenum supplements. Toxicity of molybdenum can cause gout-like symptoms, organ damage, neurological dysfunctions, and deficiencies of other minerals (Vyskocil, 1999). There is no research so far about any toxicity caused by molybdenum from diet, except in situations involving environmental poisoning. As such, there is little cause for concern about elevated dietary intake of this nutrient in most of the situations.

However, molybdenum toxicity is known in animals and can cause stunted growth, kidney damage, bone loss, anemia, and infertility (Fungwe et al, 1990).If too much molybdenum gets released from an industrial unit and plants and animals in the area get directly exposed to high levels of molybdenum, and then human beings eat those plants and animals for food, it can result in increased dietary intake of molybdenum. However, this type of dietary exposure is definitely the exception and not the rule.

The National Academy of Sciences (NAS) has established a Tolerable Upper Intake Level (UL) of 2 milligrams, or mg (the same as 2,000 micrograms, or mcg) for adult men and women, 19 years and older. For younger persons, the ULs are as follows.

Two other categories of ULs are as follows.

Concentration beyond this level can cause some issues in the human bodies.

Natural ways and ideas to add more molybdenum into your diet


Lentils have rich molybdenum content. They contain 148.50 mcg of your molybdenum needs in just one cup serving. Add a little to a salad bowl or cook some turkey along with it. Lentils can also be added in a curry spiced soup. 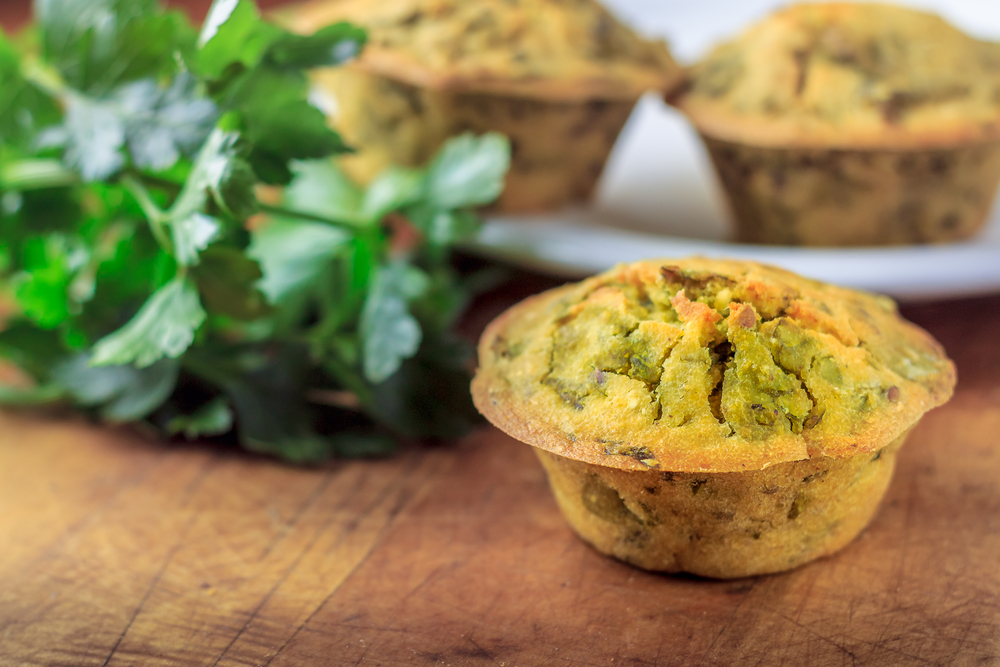 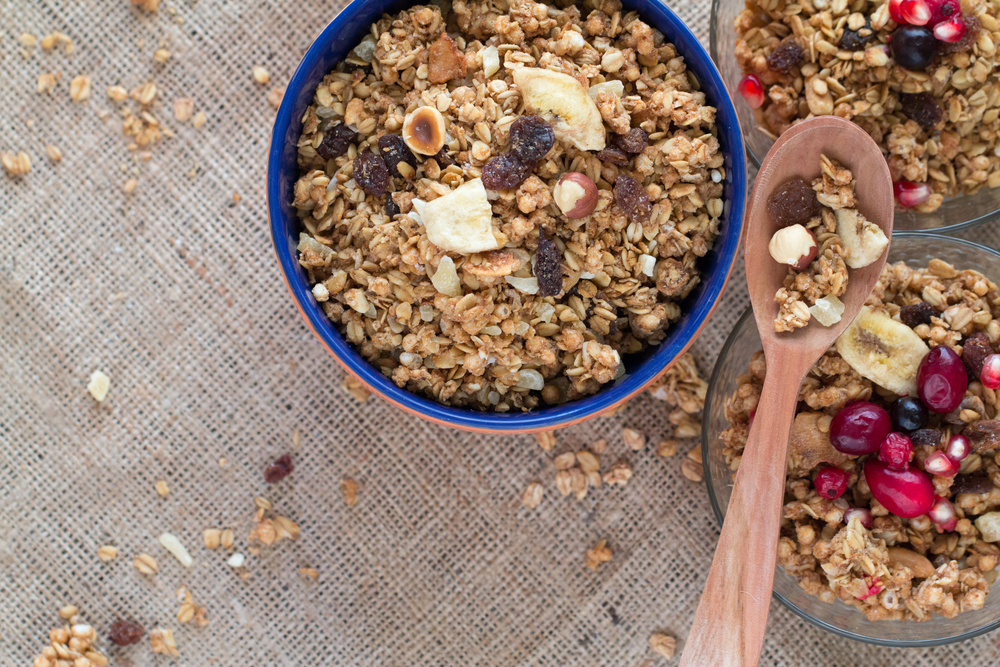 Oats are also rich in molybdenum with 7.6 percent in a 1/2 cup serving. Oats can be easily digested and can be cooked up as a savory or sweet. Oats can be taken with milk or even some dry fruits. 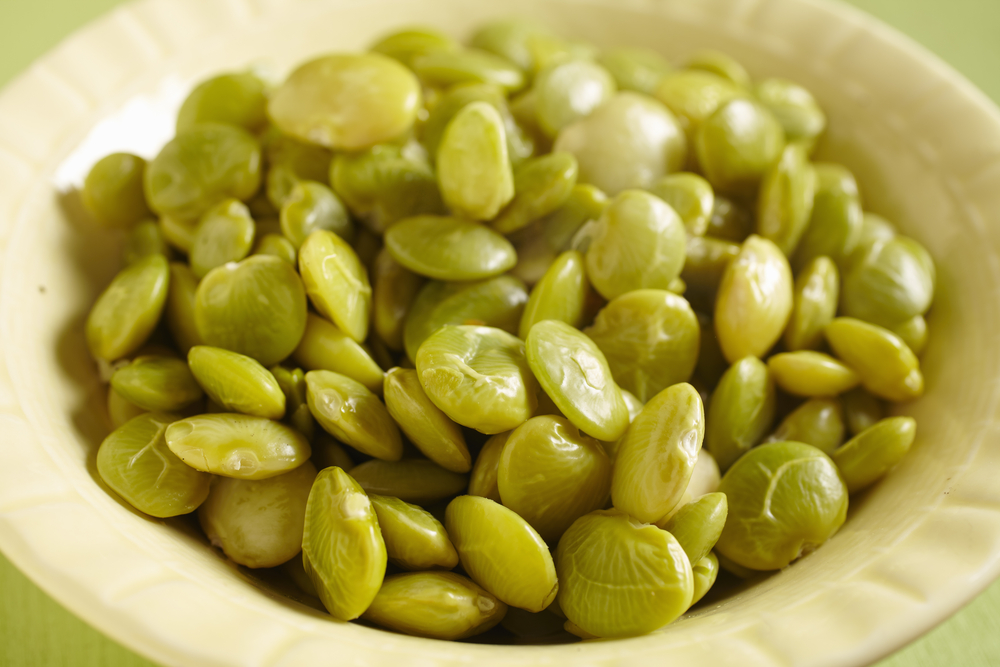 One cup lima beans provides 26.1 % molybdenum. It can be added to salads as well. It tastes great when added with some vegetable curries. 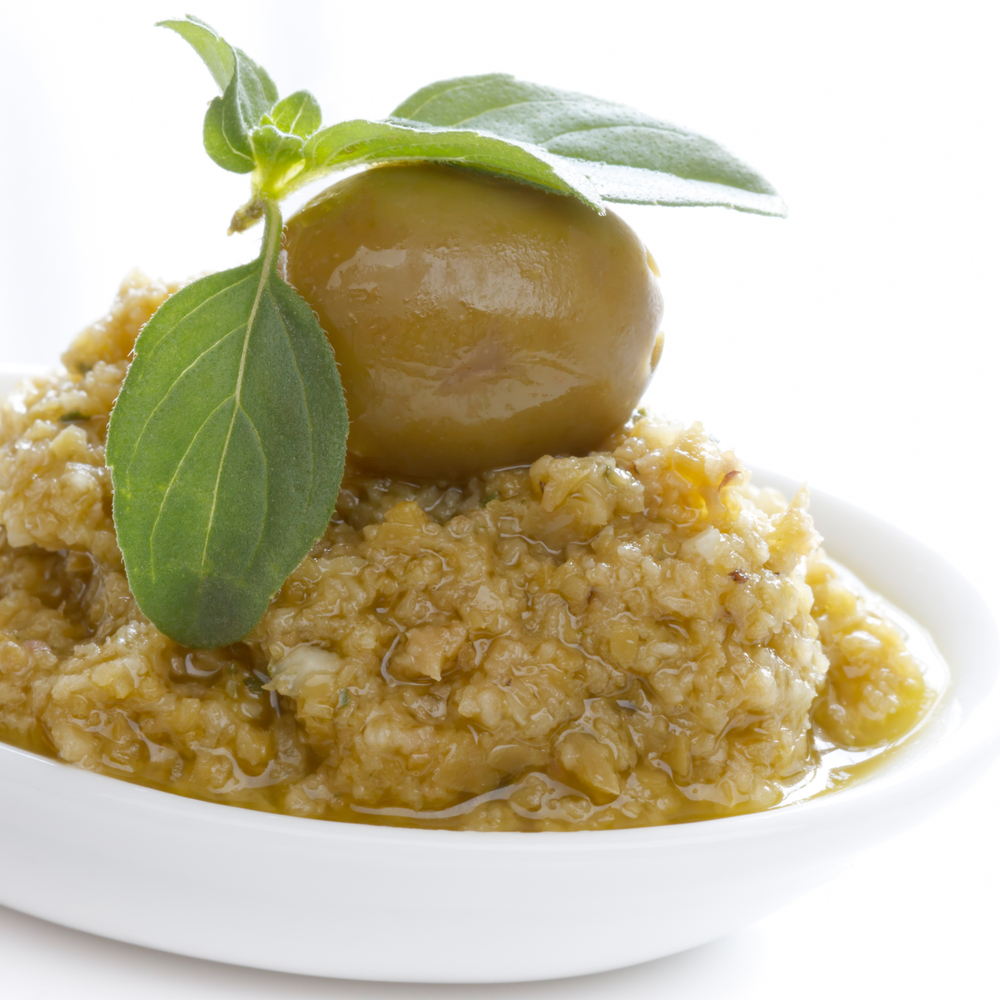 Almonds have molybdenum and ½ cup can provide 2.1 % of molybdenum nutrition. Marcona almonds spread can be combined with olives, tarragon and lemon juice in a food processor. It makes a great recipe.

Molybdenum is an essential element for maintaining our overall health. It has an important role to play in aiding the activity of several enzymes in our body which are essential for our metabolism function. Since it’s required in less quantities for the proper functioning of our body, humans can make up for it from daily diet without considering taking its supplements. Deficiency symptoms need attention and should be addressed immediately with certain supplements and medications. 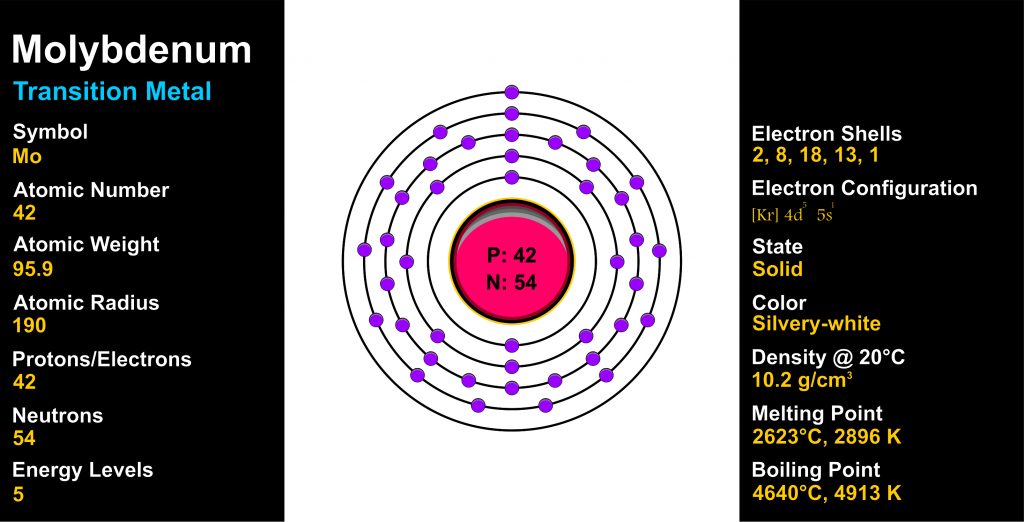