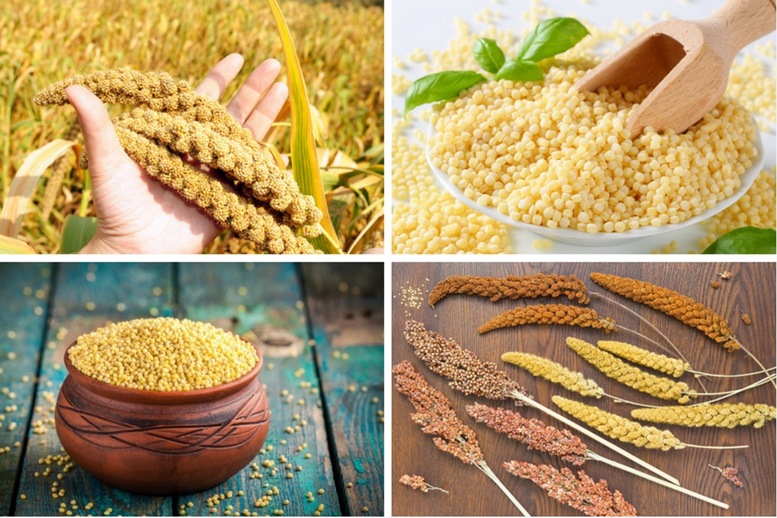 Millets are a collective term of a number of annual cereal plants that produce bright green leaves and small, round seeds. Millet is an extremely important crop in the semi-arid and sub-humid zones as staple crops for both humans and animals. Millet, together with sorghum, are the major foods for around 60 million people concentrated in the inland areas of tropical Africa. It also plays an important role in the diet of the central and southern states of India and Eastern Europe.

There are various types of millets. The most important millets are pearl millet, finger millet, proso millet and foxtail millet. All the seeds of millets are tiny in size and varied in colors of white, yellow, red or gray. Proso millet, also named common millet, is one of the most widely cultivated millet and the oldest crops known to mankind.It is mainly cultivated and consumed in China.Pearl millet is the mostly widely grown millet in India and Sudan. Finger millets are mostly grown in Africa. Millet is used as a puffed or cooked breakfast cereal or as a replacement for wheat flour in certain baked products.

Even though millets are generally considered as a famine crop for the poor, they are nutritionally superior to the widely consumed polished white rice or white flour. Millet is a rich source of dietary fibres, vitamins, calcium, iron and magnesium. None of the millets are closely related to wheat and they don’t contain any gluten. It is gluten free and has low glyceamic index. This makes them appropriate foods for those with coeliac disease or having allergy or intolerance to wheat as well as people with high blood glucose concern.

Table 1. Name of different types of millets in English and Hindi 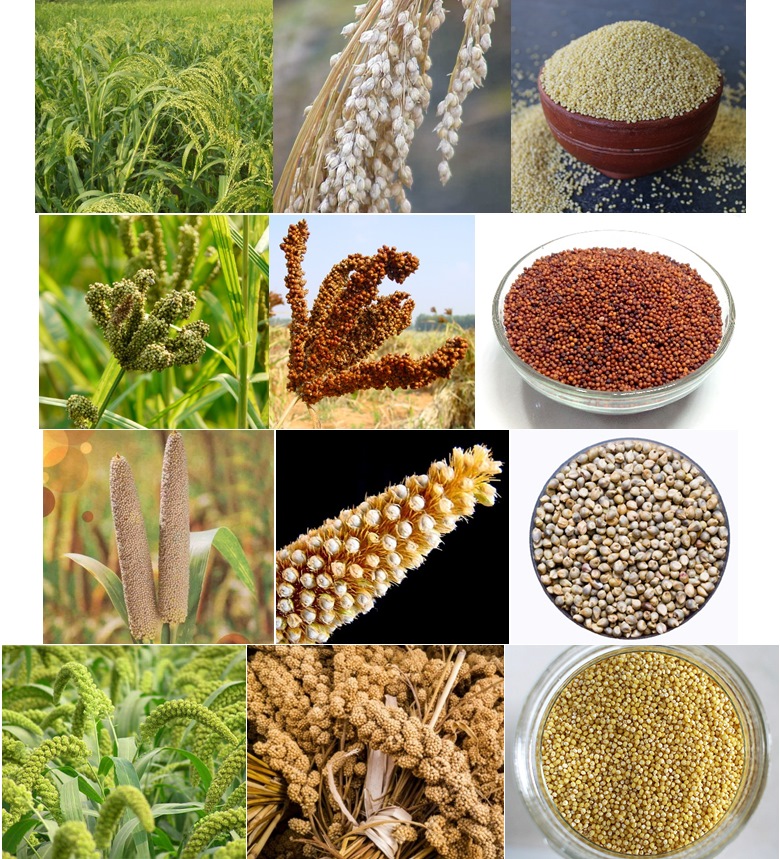 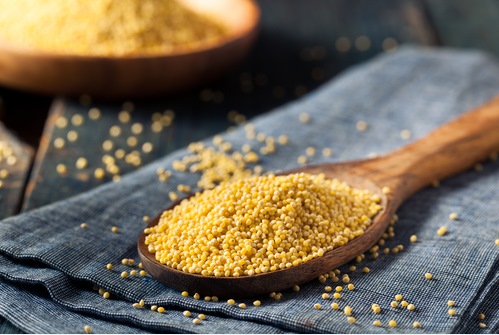 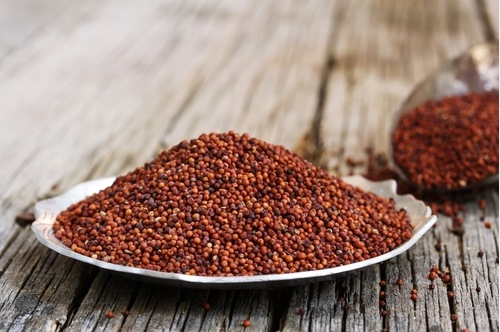 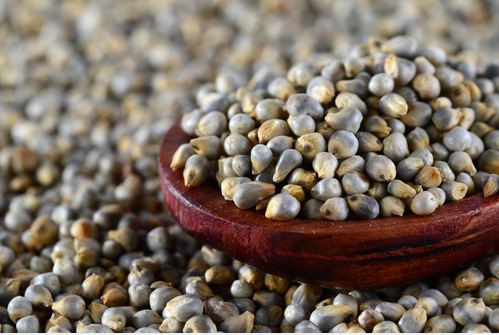 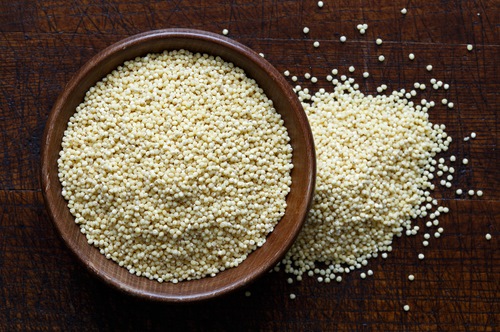 Millets are cereals with well-balanced nutrients among all the cereals. Little millet has the highest amount of dietary fiber (37-38%) among all the cereals. Finger millet is well known for its high dietary fiber and minerals. It’s crude fiber content and mineral are markedly higher than those of wheat and rice. Fox millet is concentrated with the essential amino acid lysine which makes it a potential functional food or as a supplementary protein source to most cereals. Prosco millet is also rich in essential amino acid, including leucine, isoleucine and methionine. Little millet has a high percentage of polyunsaturated fatty acid. The presence of all required nutrients makes millets suitable for manufacturing of baby food.

Just as other whole grains, millets are rich in minerals and vitamins. Finger millet is exceptionally rich in calcium compared to all other cereals. It is even eight times higher than the pearl millet. For this reason, finger millet could be used to compensate the calcium deficiency of a rice diet. Finger millet is also rich in phosphorus and iron. Phosphorus in millet helps with fat metabolism and energy generation. Millet contains a good amount of B complex vitamins, especially the folic acid, niacin and vitamin B6. Sufficient intake of B complex vitamin is important to prevent anxiety, depression and fatigue.

Antioxidants are widely believed to be important protectors against oxidative damage, which has been implicated in a range of diseases including cancer, cardiovascular disease and aging. Phenolic acids, the good natural antioxidants located in the outer layers of millet, possess potential health-promoting properties by reduce the oxidative stress. It also has a cholesterol-lowering effect. Another antioxidant of millet, the caffeic acid, is reported to decrease the fasting glycaemia and improve glucose tolerance.

Millets help reduce the risk of heart diseases mainly by reducing plasma cholesterol and triglycerides levels. In animal study, it was found that rats fed a diet of millet had lower serum cholesterol and triglycerides level compared to those fed with rice. Moreover, feeding the proso millet protein improved the good high-density lipoprotein (HDL) cholesterol in obese type-2 diabetic mice. The antioxidants present in the millet also help to reduce the lipid peroxidation of the harmful LDL cholesterol which leads to the formation of arteriosclerosis eventually.

Control of postprandial blood glucose level is critical for the treatment of diabetes which can be controlled by intake of high fiber diet. Millet has been reported to be beneficial for type 2 diabetics due to its low glycemic index, high fiber content, and high polyphenols, compared to rice and wheat. Consumption of finger millet based diet showed a significantly flatten plasma glucose surge and insulin response.Pearl millet was found significantly rich in resistance starch, soluble and insoluble fibers. The resistance starch is indigestible and will not cause the surge in blood glucose level. Phenolic compound from the millet grains reduce the glucose release due to its ability to inhibit the activity of enzymes responsible for starch digestion. Hence, millet grains have the potentials to be useful in preventing diabetes and for treatment of diabetics.

Different from rice and wheat, millets are minimum processed to be consumed as a whole grain, which means the dietary fiber are reserved in its seed coat. The good amount of dietary fiber in millets help to maintain the health of your digestive system. Fibers works by increasing the bulk of stool, stimulating regular bowel movement and preventing constipation. Furthermore, soluble fiber is a good prebiotic material that feeds the beneficial microbes in your guts.

Finger millets have a high amount of calcium (350 mg in 100 g finger millet). Calcium is the most important mineral that keeps our bones strong. The daily recommend intake of calcium is just 350 mg. Hence, millet is a good source of calcium for growing children and the elderlies who are prone to osteoporosis.

The high dietary fiber of millets prevents breast cancer and colon cancer. Studies showed that women who have 30 g of fiber everyday have 50% less chance of getting breast cancer. Phytochemicals of millets have an anticancer function by mediating multiple pathways at different stages of cancer development. Millet polyphenols work by inhibiting the growth of tumor cells and depress cell replication pathways.

Millet grains are rich in antioxidants and phenolics which offers the antioxidant activity that is important for health, aging and metabolic syndrome. The extract of millet showed the activity to inhibit the glycation and cross-linking of collagen, which cause the aging of our skin. There is a potential usefulness of millet in the protection against aging.

Side effects of eating too much millet

Millets are perfectly safe to be consumed in a moderate amount. It has been consumed as staple food by millions of peoples in the past thousands of years. However, excessive consumption of millet might cause an adverse effect. Millets contain goitrogen, a substance that interferes with the production of thyroid hormones and inhibits iodine uptake and utilization by the thyroid gland. Deficiency of iodine is a significant health problem which leads to the development of enlarged thyroid gland, known as goiter. Goiter causes dry skin, anxiety, depression and slow thinking. In the Sudan region of Africa where millet is consumed as the primary source of energy, the occurrence of goiter was much greater than anywhere else in the world. Hence, people with thyroid problems need to restrict their consumption of millets.

For every 100 g of cooked millet, you will get the following macro- and micro-nutrients:

Millet is one of the oldest crops known to mankind. Both the ancestor and the location of domestication of millet are unknown. It was believed that millet was cultivated during the Neolithic period (8000-2000 B.C.) in China where farmers plant the proso millet during the Second Chinese Dynasty. Nowadays, millet still play an important role in the diet of northwest China. Millet was used to be cultivated in western Europe but with the extensive growth of potatoes, millet production increasing decreased and almost disappeared by the beginning of 20th century.

According to the Food and Agriculture Organization of the United Nations, millet production ranks fifth in the world cereal production, following corn, wheat, barley and sorghum. The production of millet increased from 27.6 million tons in 2000 to 31.6 million tons in 2010. It is widely cultivated in the Russia, Ukraine, Kazakhstan, U.S., Argentina, Australia, Eastern Europe and southern India. The major exporters of proso millet are U.S., Argentina and Australia. The major millet importers are Belgium, Germany and Netherlands.

Millets have long been used as traditional staple foods by a large proportion of the world’s poor in Asia and Africa. Currently, it was consumed in northern China, India, Africa and southern Russia. About 80% of the global millet production is directed consumed as human food in forms of porridges, breads, cakes, snacks, steamed goods and beverage. Because of lack of gluten, millet flour is normally used to make flat bread. Proso millet is used as a basic ingredient to make distilled alcoholic drink (bai jiu) in Shanxi Province of China. It is also used to make bread-beer in Balkans, Egypt, Sudan and Turkey. 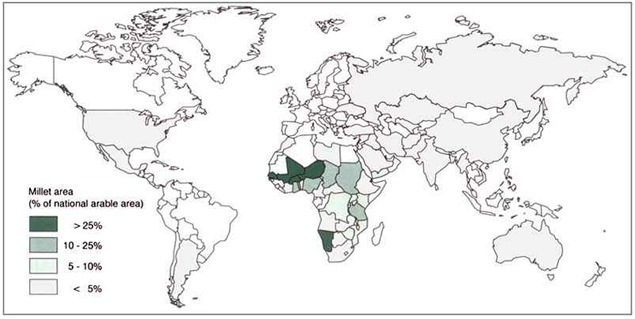 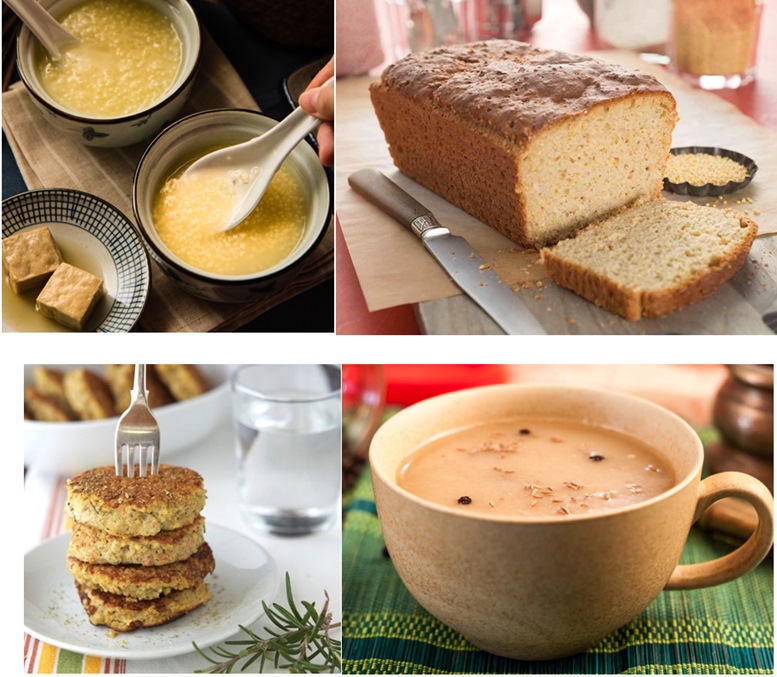 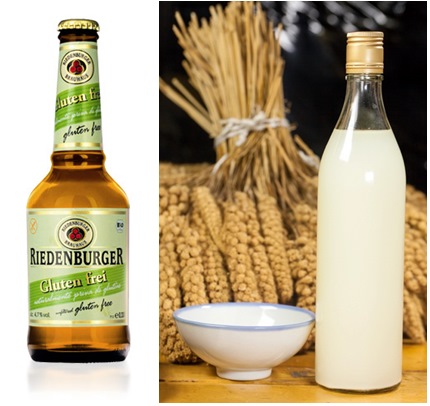 Millet beer from Germany and alcohol from China 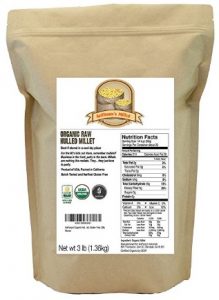