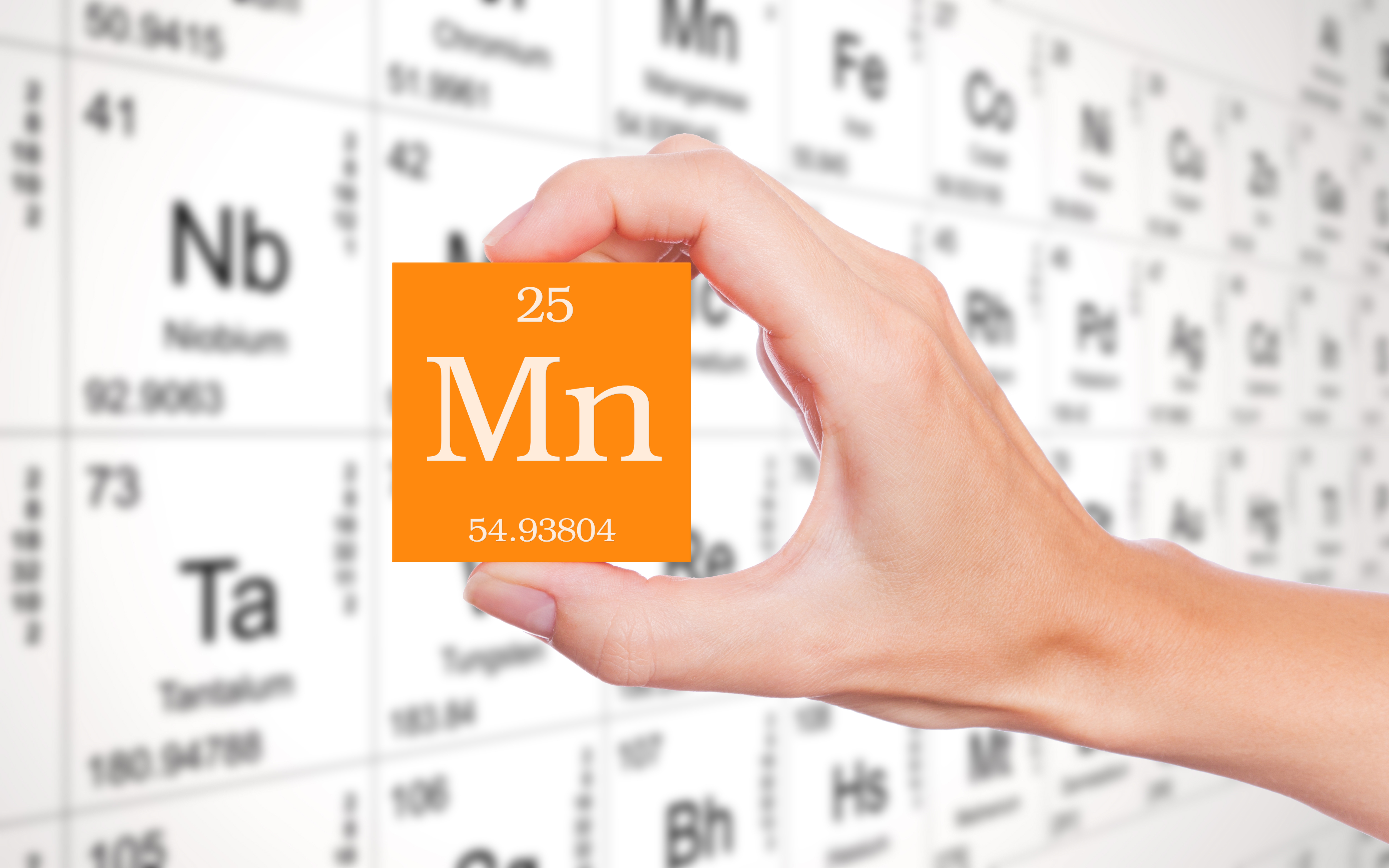 Manganese is used for combating manganese deficiency, a condition in which the body doesn’t have required quantity manganese. Manganese is sometimes included with chondroitin sulfate and glucosamine hydrochloride for treatment of osteoarthritis.

The prehistoric cave painters of the Lascaux region of France used manganese in the form of the black ore pyrolusite (manganese dioxide, MnO2) around 30,000 years ago. It has been also used by the glass makers to get rid of the pale greenish tint of a natural glass.

In 1740, the Berlin glass technologist Johann Heinrich Pott evaluated manganese chemically and reported that it did not contain any iron. He made potassium permanganate (KMnO4), one of the strongest oxidizing agents known. The Swedish chemist and mineralogist Johan Gottlieb Gahn in 1774 tried to isolate the manganese metal component in pyrolusite. However, a Vienna student, Ignatius Kaim, had already reported about manganese metal in his dissertation written in 1771.

Manganese is very brittle to be used as a pure metal. It is commonly used in alloys like steel. Steel has about 1% manganese, to elevate the strength and also improve feasibility and resistance to wear. Manganese steel has 13% manganese. This is very strong and is utilized for railway tracks, prison bars, safes and rifle barrels. Aluminum with 1.5 % manganese Drinks cans are made of an alloy of aluminum with 1.5% manganese, to improve ability to resist corrosion. With aluminum, antimony and copper, manganese forms highly magnetic alloys. Manganese (IV) is also used as a rubber additive and to decolorize glass that is colored green by iron contaminants. Manganese sulfate is used to make a fungicide. Manganese (II) oxide is a strong oxidizing agent and is utilized in the quantitative analysis. It is also used to make fertilizers and ceramics. (Emsley, 2001)

Manganese is a vital nutrient required by all known living organisms. It is present in many enzymes like the enzyme which has a part to play in converting molecules of water into oxygen during photosynthesis comprises of four atoms of manganese.

Manganese is added as a fertilizer to soils which are deficient in manganese percentage, to serve as a food supplement to grazing animals. The average human body has around 12 milligrams of manganese. We humans consume about 4 milligrams every day from foods like nuts, bran, parsley, wholegrain cereals and tea. Manganese is essential for bone growth and it vital for utilization of vitamin B1.

Manganese mining is done mainly in China, Africa, Australia and Gabon. The metal is obtained by lowering the oxide with sodium, magnesium or aluminum, or by the electrolysis of manganese sulfate. Manganese nodules are seen on the floor of the oceans. 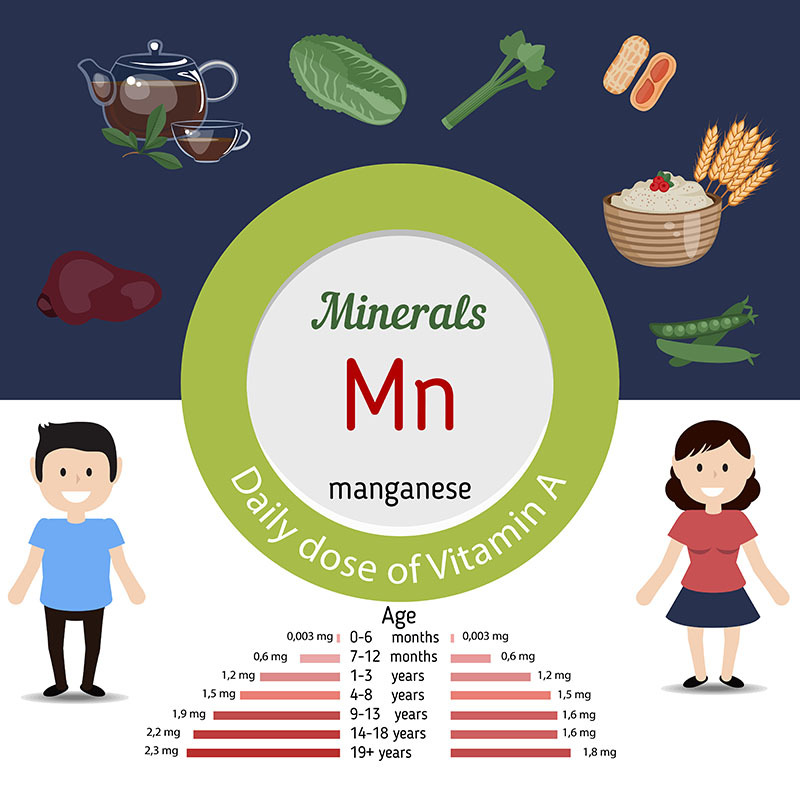 The National Academy of Sciences in 2001 recommended Dietary Reference Intakes (DRIs) for manganese. These DRIs were Adequate Intake levels, or AIs. These recommendations are given below (Trumbo et al, 2001):

Signs and symptoms of manganese deficiency

Other factors that result in symptoms of manganese deficiency include:

Due to the significance of manganese in enzyme activation, a deficiency can have adverse effects on many biochemical activities in the body (Finley, 1999).

Rico (1991) in his studies reported that manganese is an essential nutrient for growth and development of human bone structure as it is an effective mineral in facilitating the building up of mineral density of spinal bone. Manganese is mostly important for women who go through menopause. Manganese, when consumed along with other essential minerals like calcium, zinc and boron, is useful to naturally treat osteoporosis and also helps to lower the bone loss especially in old women folk who are more receptive to bone fractures and fragile bones. Manganese fosters the formation of bone regulatory hormones and enzymes responsible for bone metabolism.

There are certain enzymes in the body like arginase, glutamine synthetase and manganese superoxide which have manganese in them and work as antioxidants, helping declined levels of oxidative stress and swelling that can lead to heart disease or cancer.

Manganese is important for manganese-related superoxide dismutase function because this is one of the essential free radical damage-fighting enzymes in the body. In fact, superoxide dismutase is often called the “primary” or “master antioxidant” because it reduces inflammation, pain and stress in the body which can result in different chronic diseases. Superoxide dismutases (SODs) enzymes has the tendency to consume superoxide radicals, which slow down the aging process and are beneficial for overall health (Kiefer, 2006)

Manganese is essential in the formation of bone development enzymes called glycosyltransferases and xylosyltransferases. Manganese also plays a role in important digestive enzymes that convert compounds available in food items into useable nutrients and energy inside the body, including glucose and amino acids.

Manganese has the tendency to bind with neurotransmitters and foster faster transmission of electrical impulses in the entire body, accelerating cognitive function. Manganese is discharged into the brain’s synaptic cleft affecting synaptic neurotransmission. So manganese deficiency can make people more vulnerable to mental illness, mood changes and learning disabilities (Takeda, 2003).

Manganese has also displayed effectiveness in the production of digestive enzymes required for the process of Gluconeogenesis which involves a conversion of protein’s amino acids into sugar and in balancing the sugar level in human blood which further helps to avert the occurrence of diseases like diabetes.Manganese normalizes insulin synthesis and discharge, and the uncertain drops in blood sugar can be better managed, ensuring a normal and functional life for people having diabetes (Lee et al, 2013).

Manganese consumed along with selenium and zinc intravenously (by IV) helps people with worsened COPD (Chronic obstructive pulmonary disease) to breathe properly on their own without the help of a machine. Manganese helps to lower inflammation and the oxidative stress which is believed to be a key mechanism for smoking-induced chronic obstructive pulmonary disease and other respiratory problems, through the production of SODs (Superoxide dismutases enzymes) which makes it useful for those in need of lung healing (Epperly et al, 1998)

Manganese if taken in a specific form called 7-Keto Naturalean along with the combination of other supportive nutrients like L-tyrosine, asparagus root extract, choline, copper and potassium, helps to lose weight in obese people. This is due to the fact of manganese’s ability to improve digestive enzymes and balance hormones.

Iron and manganese are closely associated and there is a strong inverse relationship between iron deficiency and elevated manganese levels. While overly high manganese can cause anemia, manganese also helps the body to utilize and store iron to some extent as well, which can help prevent anemia (low iron) (Titus et al, 1928).

Manganese is an essential co-factor for several enzymes, and it is an important component of thyroxine, debatably the hormone in the thyroid gland. Appropriate functioning of the thyroid gland and its hormonal synthesis is useful for various health issues in the body, including loss of weight, organ system efficiency, loss of appetite and metabolism disorders.

Manganese along with calcium and zinc speeds up healing of serious and chronic wounds significantly over a period of 12 weeks (Haydock, 1987).

Manganese facilitates absorption of important vitamins like vitamin B and E and minerals like magnesium. This is because of the role of manganese in the enzymatic reactions that are required to absorb and utilize vitamins taken in from food. Manganese is one of the most adaptable co-factors for enzymatic reactions, and if there is a danger of having a deficiency of some vitamins, then it’s requisite to increase manganese concentration, as long as they are still within safe and non-poisonous levels (Rhode, 2000).

Women most commonly suffer from premenstrual syndrome (PMS). During these times, consumption of manganese along with calcium improves the PMS symptoms as it helps to reduce the mood swings, irritability, muscle pain, trouble sleeping, tenderness, headaches and depression to a reasonable extent. One study done by the American Journal of Obstetrics and Gynecology reported that women who have lesser manganese percentage in their blood experience more pain and mood-related symptoms during pre-menstruation (Penland, 1993). 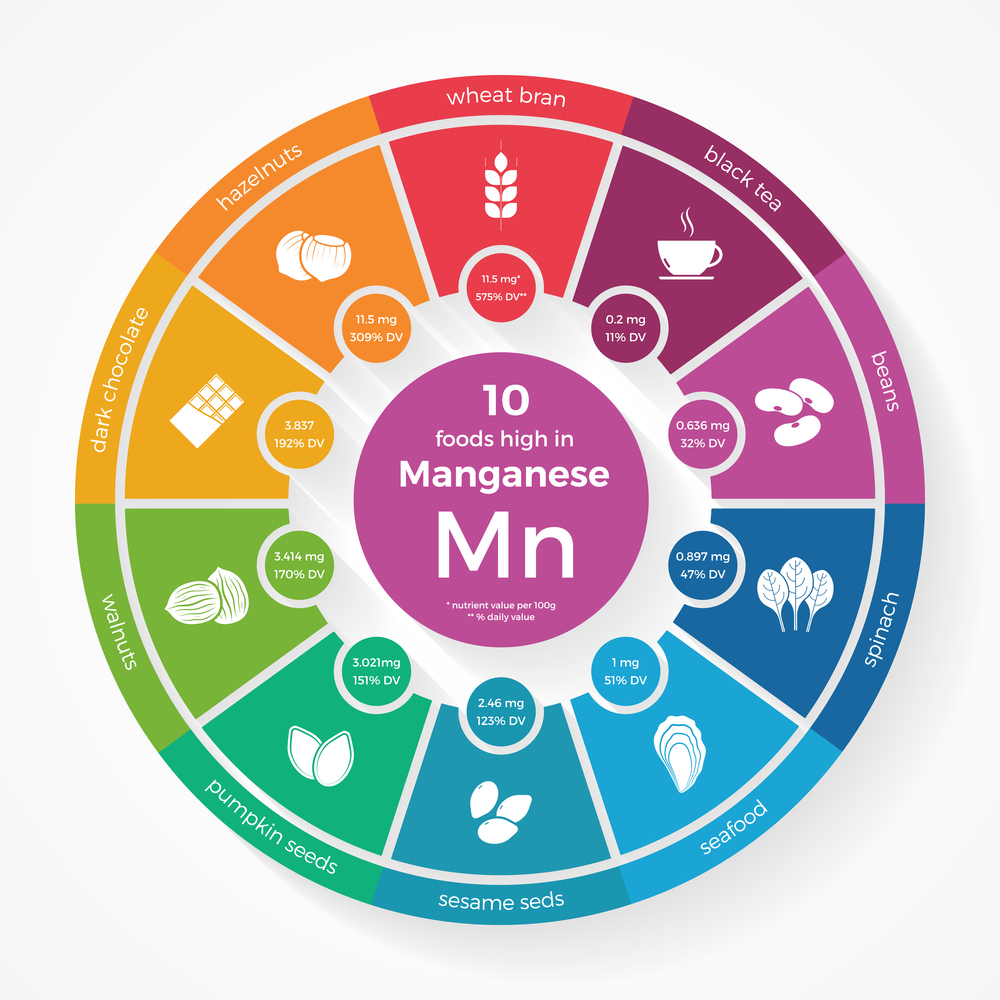 Side effects & concerns of manganese

Manganese is mostly safe if taken in amounts up to 11 mg per day. However, people who have issues getting rid of manganese from the body, like the ones with liver disease, may experience some side effects if they take less than 11 mg per day. Taking more than 11 mg per day by popping through mouth could be risky for some adults. Some of the effects have been discussed below:

Manganese, when consumed in excessive amounts, can lead to serious neurological side effects, like muscle tremor, which resemble the symptoms of Parkinson’s disease (Mena et al, 1967). Other side effects include rigidity of muscles, leg cramps, hallucinations, loss of balance or coordination, and difficulty starting or completing movements, a condition known as bradykinesia. These side effects are followed by mild conditions like tiredness or fatigue, speech issues, stooped posture, swallowing problems and sexual dysfunction. The Linus Pauling Institute reported that children exposed to high levels of manganese suffer negative effects on brain function and behavior (Bouchard et al, 2011).

Some people experience an allergic reaction when exposed to higher concentrations of manganese. The symptoms include itching, hives or rashes. Severe reactions can result in inflammation of the face, throat, lips and tongue, which can cause difficulty in breathing and lead to wheezing and coughing.

Manganese has a potential to interact with some of the medicines you might be taking, for example, some antacids, antibiotics, laxatives, or reserpine (blood pressure lowering medication). The University of Maryland Medical Center reports that the above-mentioned drugs could obstruct the absorption of manganese. 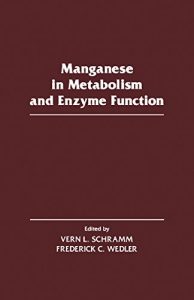 Manganese in Metabolism and Enzyme Function

People having cirrhosis of the liver, as well as children suffering from congenital venous anomaly called portosystemic shunt, are at a very high risk of health deficits from exposure to dietary and environmental sources of manganese. Manganese is commonly eliminated from the body through bile, but cirrhosis and portosystemic shunts alters the normal functioning of the liver and thus limit the potential of the body to excrete manganese, which then can get stored in the blood and, ultimately, the brain. As a result, people with liver disorders may experience certain side effects after consuming manganese dosage smaller than 11 grams per day. People having anemia as a result of iron deficiency absorb more manganese from food than healthy people, meaning they could also suffer from certain side effects due to a low dosage of manganese. People who work in steel mills or mines, regularly inhale manganese vapors and suffer from manganese toxicity called manganism. High doses of manganese also causes impaired thiamine (B1) metabolism. Excessive manganese can also result in increased demand for vitamin C and copper (Mena, 1974).

Natural ways to add more manganese into your diet 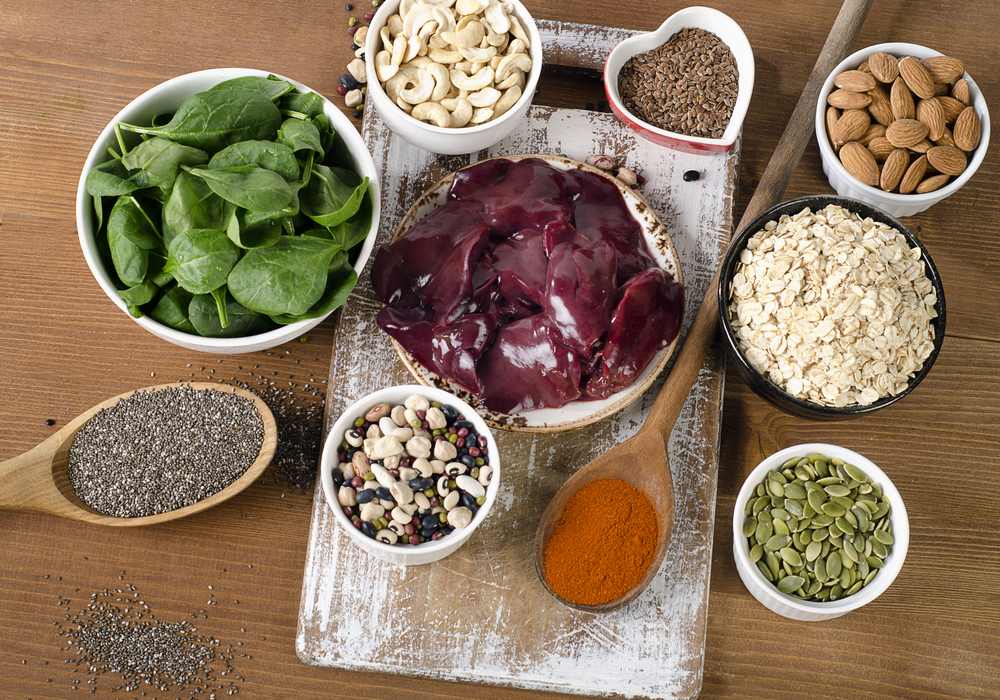 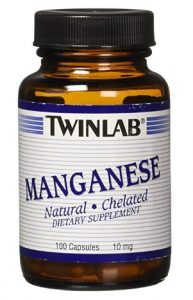 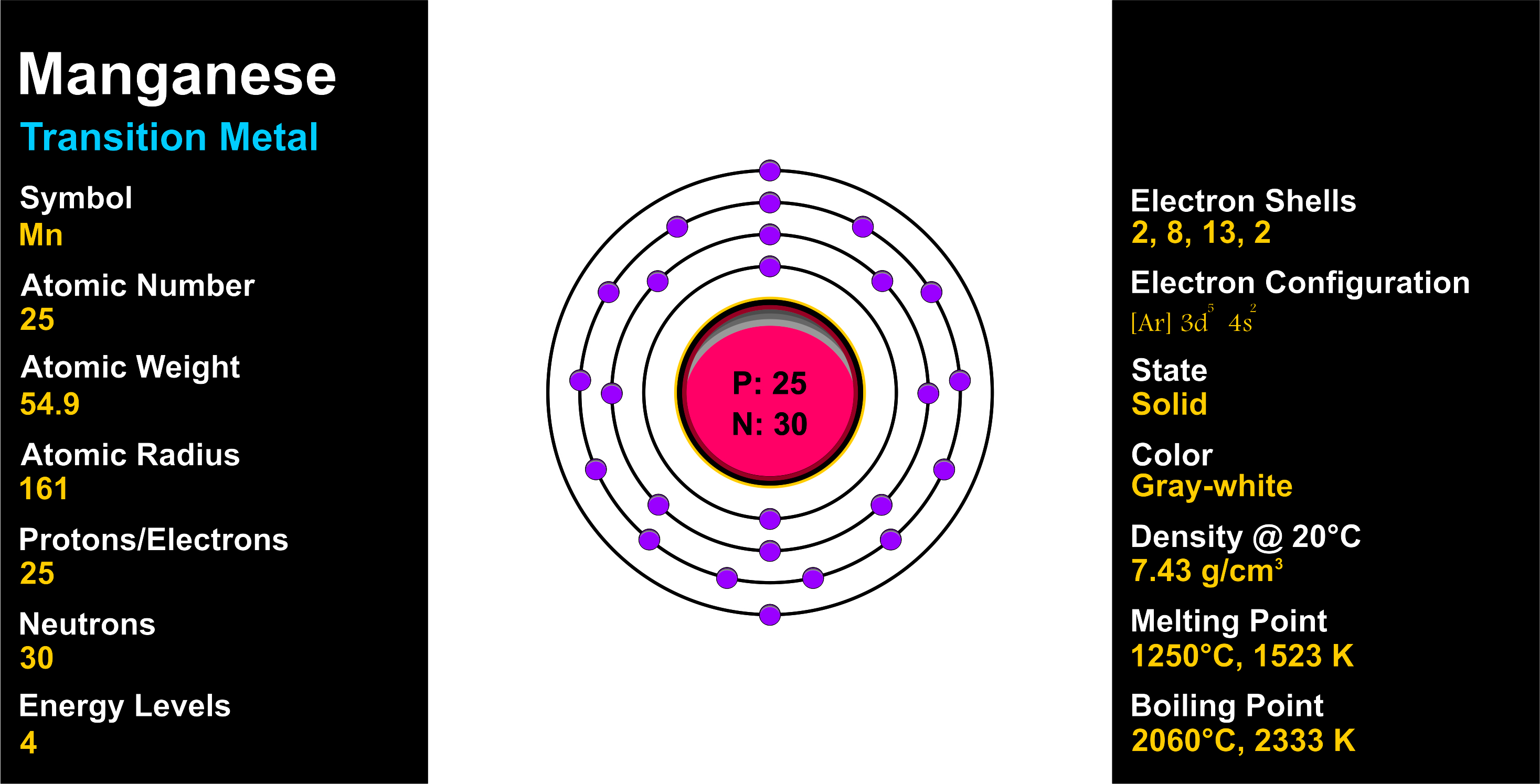