Ginger is one of the most popular and well-loved spices available today. Not only is it a staple component of nature’s medicine cabinet, it is also widely used in cooking for its fantastic flavor alone. Add to that its all-year-round availability and you will start to see why ginger is such an asset to any home.

The health benefits are varied, as you can see:

Ginger is well known for its anti-emetic properties – its ability to calm nausea and vomiting.

Unlike anti-emetic drugs which are sometimes prescribed in pregnancy to treat morning sickness, ginger has no side effects, and is safe to use (but consult a doctor first).

Trapped gas can also be miserable, and cause intense pain to the sufferer. By inhibiting the production of gas in the intestines in the first place, there is less to become trapped, and therefore less chance of colic-like pain.

Ginger is a powerful anti-spasmodic, which means that it reduces the spasms and cramps often associated with IBS.

The ways in which ginger helps to prevent and/or treat colds and flu are numerous.

Ginger is a warm spice. The ingestion of it improves circulation and encourages the blood to flow more freely to the extremities.

The same can be said for treating the symptoms and effects of hypothermia. It should be noted, however, that drinking hot ginger tea will promote excessive sweating, which should be avoided as this encourages a cooling of the body temperature – allow the tea to cool first.

If nausea is to blame for your lack of appetite, if the thought of eating literally makes you sick, then taking ginger can help. As it has well known anti-emetic properties, as well as calming the stomach, it can aid appetite.

Thanks to its anti-spasmodic effect, hiccups can be stopped by relaxing the spasms of the diaphragm. As hiccups can also be caused by poor digestion of food, or a build-up of digestive gas, ginger can help by relieving either or both.

One of the major health benefits of ginger is its ability to keep the heart healthy. By encouraging better blood flow, and as a natural blood thinner, ginger can keep the heart pumping effectively, and prevent blood clots.

By improving the blood flow, ginger has also been shown to reduce high blood pressure. In addition, it allows the muscles which surround the blood vessels to relax, therefore improving the passage of blood.

The pain of menstrual cramp can be improved significantly by taking ginger, due to its anti-spasmodic properties. The tightness and cramping of the lower abdomen are relieved, therefore reducing the pain.

Ginger is a powerful aphrodisiac. Not only does it improve blood flow throughout the body, its scent is also known to have aphrodisiacal qualities. In this instance, using ginger essential oil in a massage or in an oil burner, can have highly desirous effects!

One of the main causes of jet lag is the disruption of your body clock, meaning you can’t sleep when you need to, especially if flying over several time zones. Drinking ginger tea in-flight not only gives you a sense of comfort due to its warming effects, but it also relaxes you, meaning you are more likely to sleep, leaving you less likely to be exhausted when you arrive at your destination. (Try taking slices of fresh ginger root in your hand luggage, and ask the flight attendant to bring you hot water at intervals through your journey. Simply steep the ginger in the hot water until warming and spicy)

Still, on the topic of long-haul travel, the risk of a DVT is greatly reduced by taking ginger. The blood thinning properties mean that a clot is much less likely to form, and allows the blood to flow freely.

Ginger’s effect during cancer treatment is multi-dimensional. Below are the main reasons why every cancer patient should consider using ginger.

Not only does ginger regulate blood sugar levels, it also reduces cholesterol levels, both of which are important in fighting diabetes.

Notoriously hard to treat, fungal infections can be greatly helped by using ginger, including those which are particularly drug resistant.

It is a generally recognized fact that most stomach ulcers are caused byHelicobacter Pylori. Not only has ginger been shown to inhibit the production of H.Pylori, but it is also thought to aid existing ulcers to heal, too.

Some studies have shown that ginger can help lower serum cholesterol, one of the factors associated with fatty liver disease. These studies are in their early stages, so are not definitive, but they are promising.

Are there any Side Effects

Ginger is almost completely safe to use. However, as in all things, caution should be exercised and advice should always be sought from your doctor before self-treatment. Certain conditions and circumstances are contraindicated.

If you are taking any of the following you MUST seek professional advice before taking:

Ginger is not the only natural blood thinner, so if you are taking any other natural substances, please check their properties.

In addition, if you are any of the following, advice must be sought:

In small doses, ginger has very few side effects. However, larger amounts can result in gas, heartburn, stomach irritation and/or mouth irritation.

Common ways to use Ginger

There are many ways in which you can take ginger. Fresh ginger is always preferable, as properties can be lost during the drying/grinding process.

Be creative – find ways to incorporate ginger into your day. Grate some onto soup, infuse it into a drink, use freely in stir fries.

Ginger also provides a variety of vitamins and minerals. Per 100g they are as follows:

Used sensibly, ginger really is a wonder food and should be part of everybody’s kitchen.

Check out our long research on the best multivitamin here 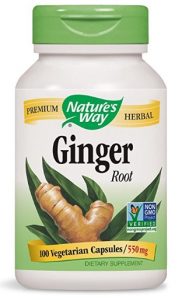