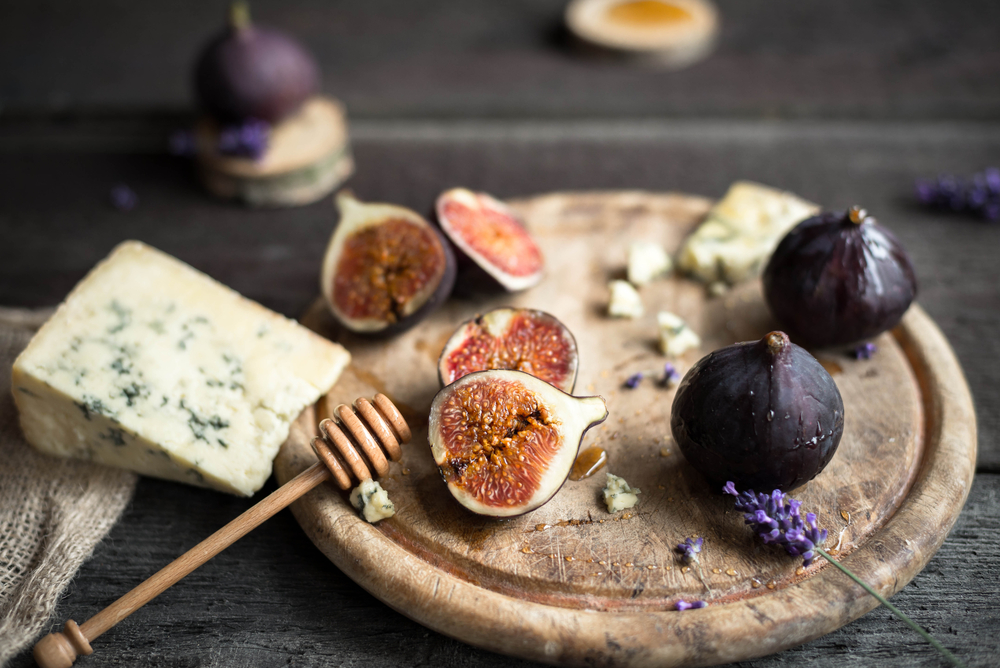 Figs, the fruits, and trees of the Ficus genus are botanically classified into the mulberry family (Moraceae). They are among the oldest species of higher plants on earth. Figs have evolved into over 800 different species, making it one of the most popular species of all plant genera. To exploit diverse natural habitats, the original morphs of the fruit changes into many shapes and sizes. Fig fruits vary in their skin color (ranging from almost white to black), flesh color (honey-hued to plum-purple) and size (whether like marbles or like pears). Some of the popular varieties commonly grown are Brown Turkey, Conadria, Kadota and Black mission.

The fig fruits are sweet and delicious food enjoyed by human since the earliest time. Figs constitute an important component of the human diet, as fresh and dried. Ripe fig fruits have juicy flesh inside. The dried fig fruits are highly concentrated with minerals and vitamins. The other parts of the tree, its leaves, latex, bark and roots are also used for medicinal purposes. Figs are especially rich in fiber, trace minerals, antioxidant polyphenols, proteins, sugars and organic acids.

All figs have in common a peculiar reproductive characteristic. This “fruit”, actually the swollen flower base of fig, contains both male and female flowers. They develop without the fertilization of their flowers and their seeds contain no embryos. Growers of the fig must tie male figs containing wasp eggs to the branches of the female fig tree in order for pollination to occur. 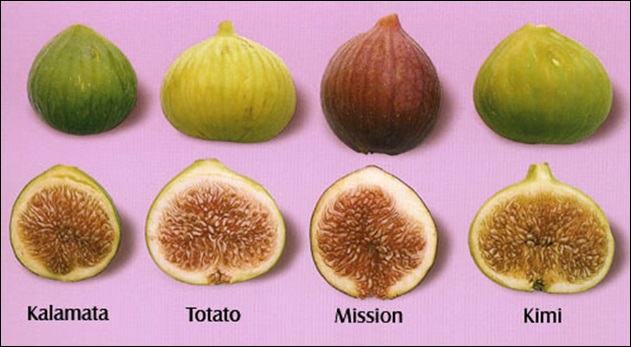 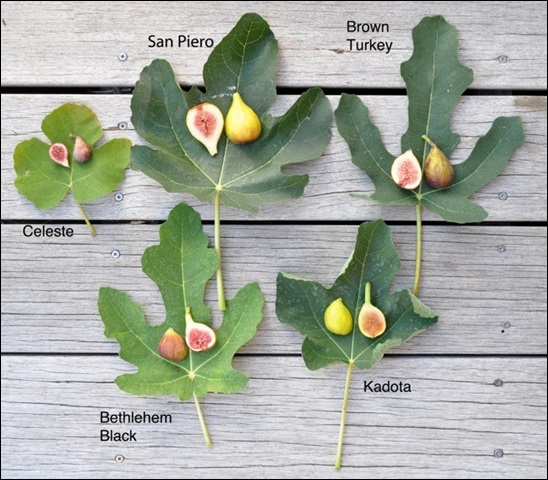 Dry fig is a highly nourishing food with high minerals content of calcium, copper, potassium, manganese, iron, selenium and zinc. One hundred gram of dried figs contains 680 mg of potassium, 162 mg of calcium and 2.03 mg of iron. Potassium is an essential component in keeping the body hydrated and controlling heart rate and blood pressure. Copper and iron are essential for red blood cell formation. Fresh and dried figs are also a good source of the B-complex group of vitamins, such as niacin (B3), pyridoxine (B6), folates (B9) and pantothenic acid (B5). B vitamins function as cofactors for metabolism of carbohydrates, protein and fats.

Both fresh and dry figs are excellent sources antioxidants. Research has shown that eating two dried figs (~ 40 g) on a regular basis significantly increased the plasma antioxidant capacity. Besides the fruit, the fig stem bark and leaves all exhibit strong antioxidant properties. Such effect is attributed to the presence of high levels of phenolic compounds, particularly proanthocyanidins. Besides phenolic compounds, flavonoids in figs also exhibit an adamant antioxidant activity. These phytochemicals give fig a strong free radical scavenging activity in reducing the load of reactive oxygen species in our body. Antioxidants from figs can protect plasma lipoproteins from oxidation and significantly elevate plasma antioxidant capacity for 4 h after consumption. The high antioxidant activity shows a protective effect against the development of chronic diseases such as cancer and cardiovascular diseases.

Both the leaves and fruits of figs are valued for its beneficial impact on the management of plasma glucose level. This is attributed to the functional compounds such as polyphenols, flavonoids and antioxidants in figs. One special compound called ficusin, extracted from fig leaves, significantly improve the insulin sensitivity of rats. These phytochemicals have hypoglycaemic properties and modulate glucose transportation to significantly decreased postprandial blood glucose level.

Research has shown that dried figs help to relax the muscle and relieve spasm of muscle. Such property of figs is attributed to the presence of alkaloids, flavonoids, saponins and terpenes. It also helps in relaxing the gut and treating a different hyperactive gastrointestinal disorder such as abdominal pain.

Figs is a remedy in folk medicines including natural cancer treatment. It was shown that some bioactive compounds in figs inhibited the growth of various human cancer cell line. Recent studies suggested that the anti-cancer activity of fig could be due to the presence of steroids and flavonoids, due to their free radical scavenging activity. Although there is no solid conclusion on the anticancer effect of figs, there is a recommendation to take fig as part of the diet to enjoy its multiple health benefits which might have an anticarcinogenic effect.

Figs fruit contains a high level of potassium and a low level of sodium. The proper intake of potassium enable diminishing the effects of sodium and thereby lowering the blood pressure level. This feature makes fig suitable for fighting against the hypertension conditions.

Figs are a popular ingredient in many shampoos, conditioners and hair masques. The fruit is believed to strengthen and moisturize hair and promote its growth. Deficiency of either zinc or copper is known to cause hair loss. So the rich content of zinc and copper in figs help keep hair healthy.

Figs are used to treat skin problems in some folk medicine, even though no final scientific conclusion has been drawn on this claim. Raw figs is a good source of many enriching vitamins, antioxidant and minerals which help to improve your overall health and blood circulation which might help to alleviate any skin problems. Fresh figs could be used as an ingredient of a nourishing face mask.

The high phosphorus content in figs promotes bone formation and encourages re-growth in the case of degradation of bones. In addition, the calcium content in figs also helps to increase the bone density. Hence, figs should be a part of daily intake for growing kids.

The rich nutrient profiles of figs make it an excellent source of dietary vitamins, minerals, phenolic compounds and antioxidants. The presence of these health-promoting compounds makes fig a great immune system boost to stimulate the immune system to fight against diseases and disorders.

Research has shown that dried figs help to relax the muscle and relieve spasm of muscle. Such property of figs is attributed to the presence of alkaloids, flavonoids, saponins and terpenes. It also helps in relaxing the gut and treating a different hyperactive gastrointestinal disorder such as abdominal pain.

Figs is a natural antimicrobial agent. Studies have shown that fig extract is able to combat various bacteria and fungi. It was also noticed that the latex of fig has a powerful antibacterial property against several species of bacteria.

Side effects of eating too much 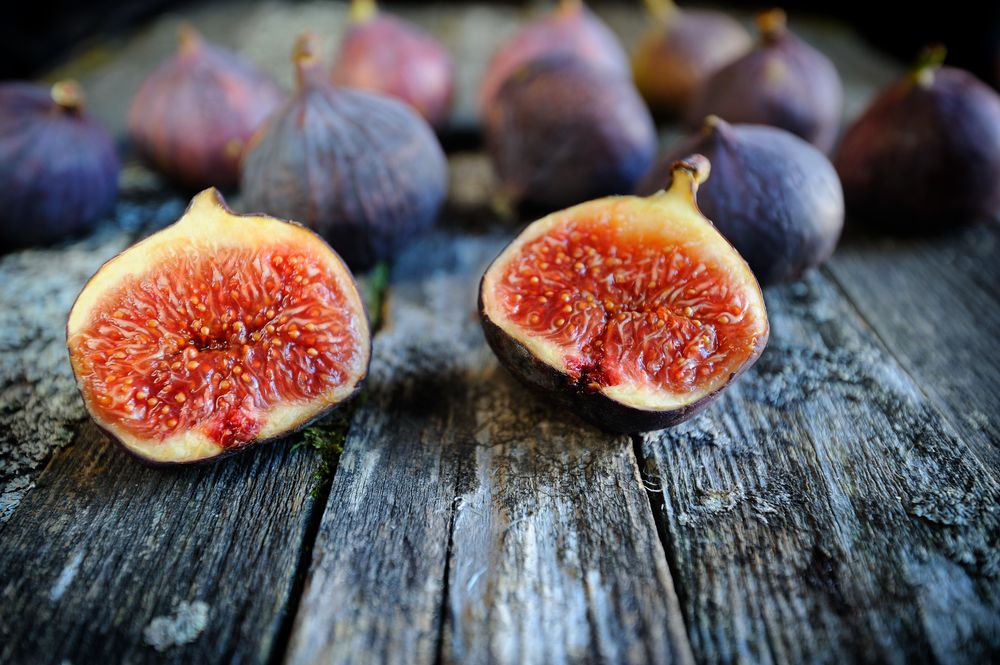 It is generally safe to consume figs in a moderate amount. Even so, there are a few potential side effects if plenty of figs are consumed.

For every one medium size fig (~50 g), you will get the following macro- and micro-nutrients: 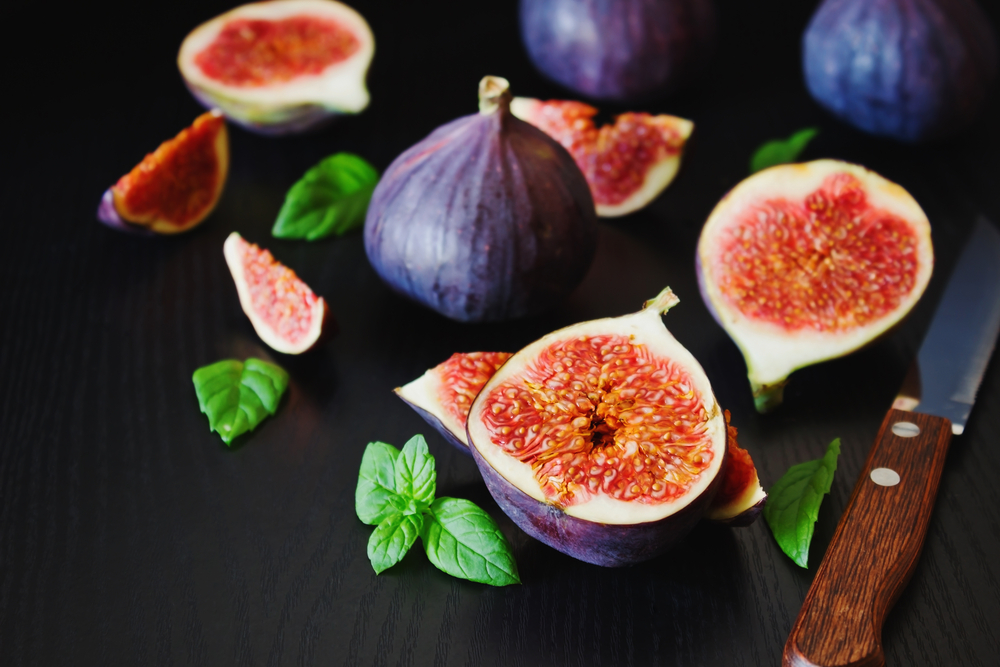 Figs, along with pomegranates, grapes, dates, olives, barley and wheat, comprise the seven indigenous species of ancient Israel. Each of these groups possesses healing properties. Figs are likely the earliest cultivated plants, predating even the grains and the honey, pomegranate wine and olives.The east Mediterranean region is considered as a place of origin for fig and the place from where its cultivation expanded to the whole Mediterranean territory. Currently, the fig grows best and produces the best quality fruit under the dryer warm-temperate Mediterranean climate.

The Bible and many other stories abound western Asia and the Mediterranean tells numerous stories of the fig. Fig was the fruit mentioned in the Bible. In the story of Adam and Eve, the fig was considered to be a divine fruit, the fruit of paradise, and the symbol of abundance. In the Bible, land with no figs and vine is referred to as not valuable. The idiom “sitting under his own fig tree” was widely used by ancient tribes as a sign of wealth. Fig stands for veiled fertility in some cultures while it is a symbol of infertility in others.

In the 1500s, figs came to America, and by the 1700s Spanish missionaries were planting them in their settlements along the West Coast of Mexico and California,  where a commercial industry took root in the Central Valley in the late 1800s.Nowadays, world fig production is concentrated in the Mediterranean countries, and among them, Turkey has been dominating world fig production for a long time with approximately 300,000 tons annual production (average 27 % of the world’s total production). The country is also the biggest fig exporter among the producer countries with 180,000 tons of exports annually, which represents 52 % of the total world fig exports. 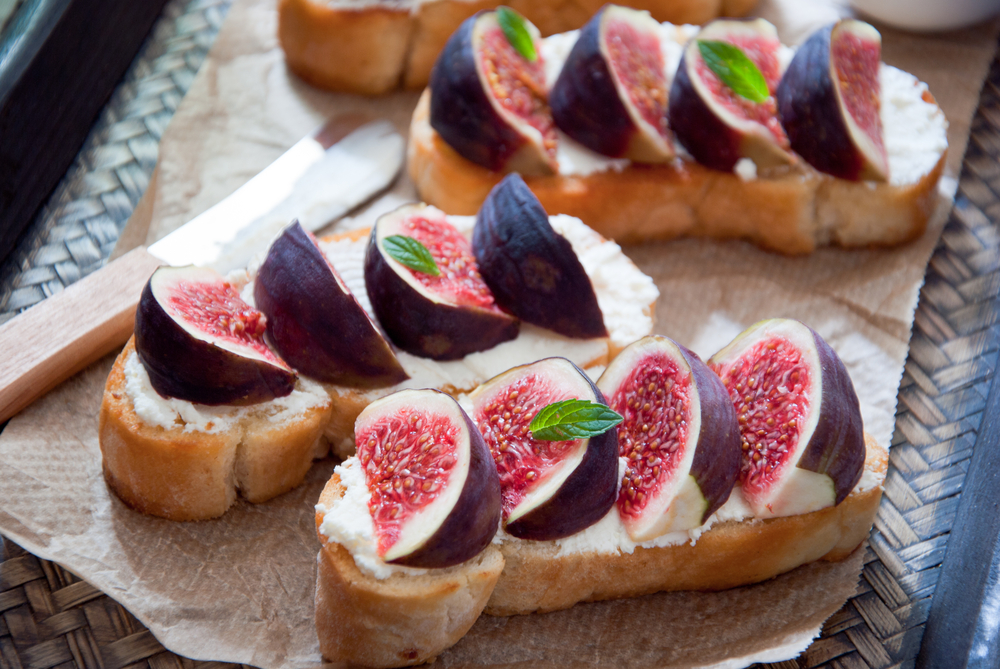 Bruschetta with figs and goat cheese 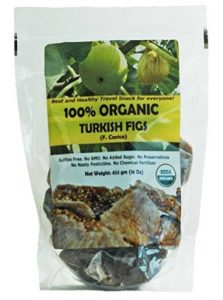