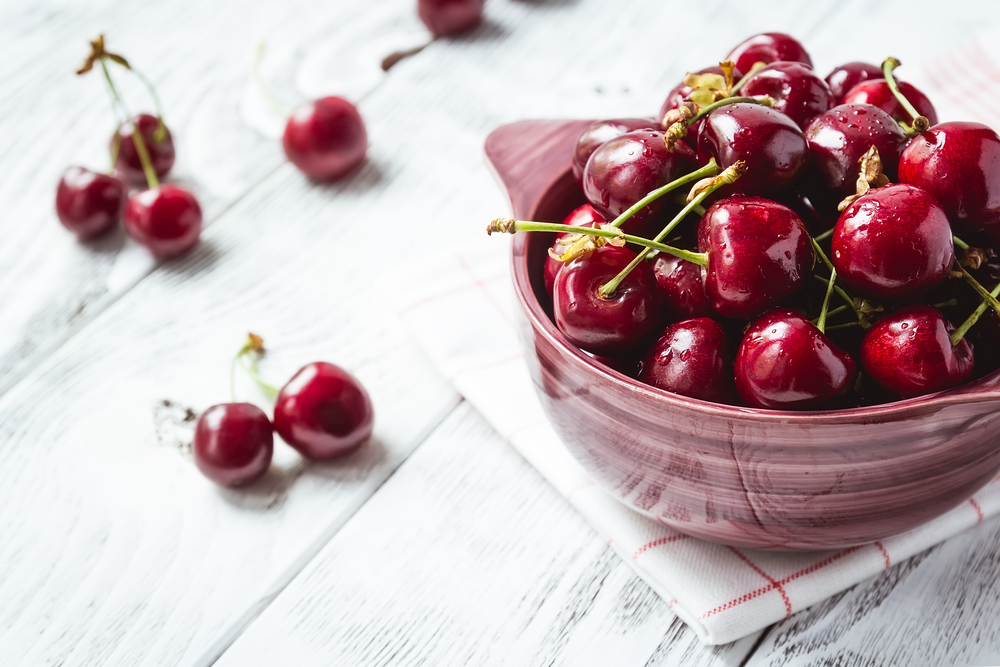 The history of cherries.

Cherries – steeped in history, and rich in health benefits.

Have you ever wondered about the origin of the red-colored, deliciously tangy cherries which grace our tables? It is known that this fruit had a place on the tables of the Romans, the Greeks and the Chinese noblemen of old. Apart from the appealing look and taste, even in those far-off days, many folks were well aware of the health benefits provided by cherries.

Cherries were first brought to America by the early settlers who came by ship in the 1600’s. French colonists later brought pits that they planted in the Saint Lawrence River and Great Lakes areas. When the French settlers established cities such as Detroit, Vincennes, and other mid-western settlements, cherry trees quickly became part of the gardens.

In 1852 cherry trees were planted on Old Mission Peninsular, in the Traverse City area of Michigan. Because of the somewhat European continental-type climate, the area proved to be ideal for growing cherries.By the early 1900’s, the tart cherry industry was firmly established, and the Traverse City Canning Company was built.

The fruit was soon being shipped to Chicago, Detroit, among many other American cities, and over time the cherry industry has boomed in the US.

The two most well-known of the cherries are the sweet Bing cherry, and the Maraschino, which originated in Yugoslavia and Northern Italy.

Every year in July, the national Cherry Festival is held in Traverse City, which has been dubbed “Cherry Capital of the World!” Thousands of cherry fundi’s from all over the world gather to celebrate the harvest – and to eat cherries! 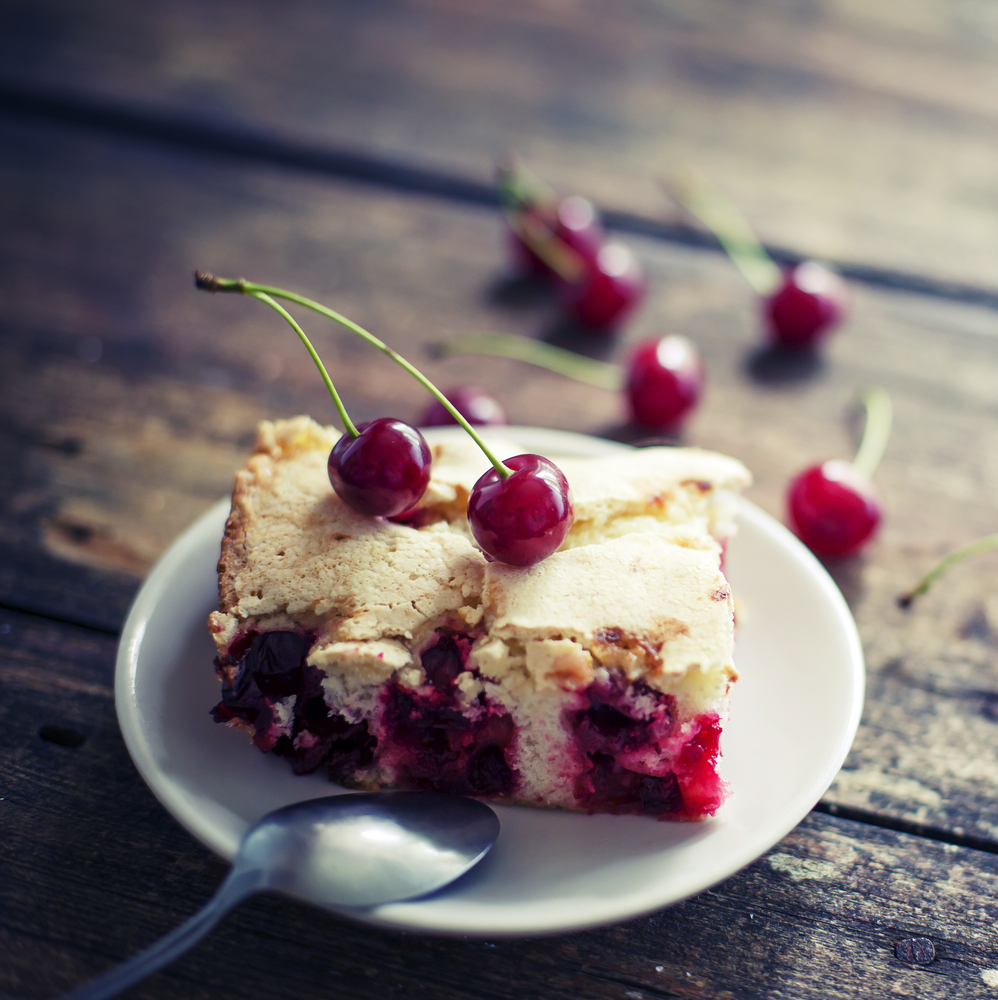 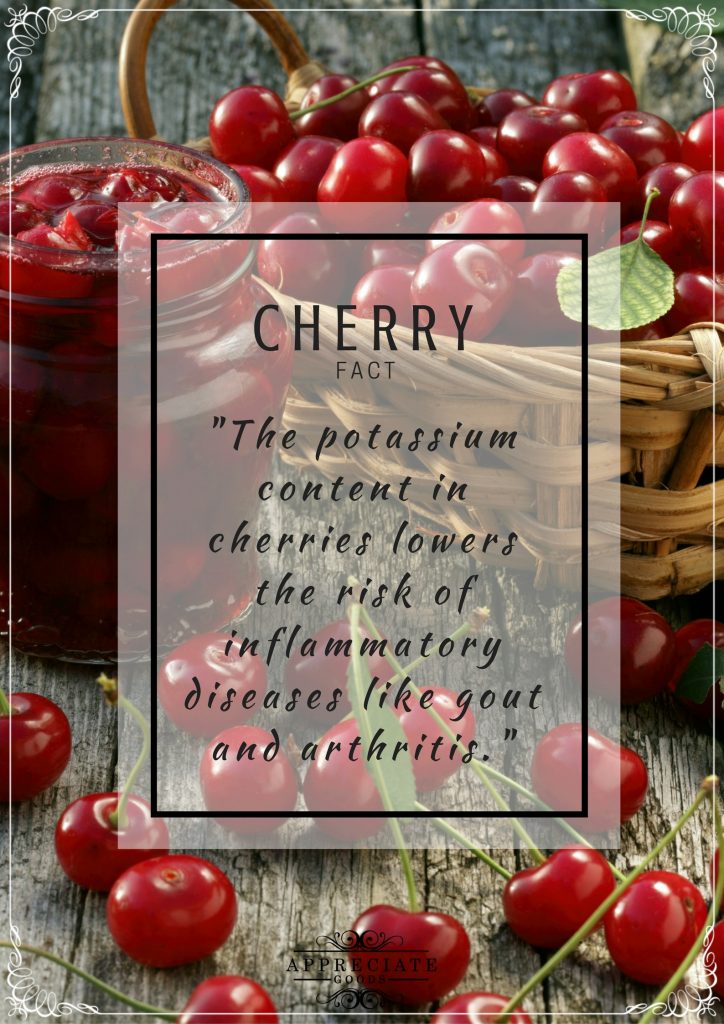 Some unusual, interesting facts about cherries

The red color of cherries is obtained from the same pigments found in red grapes. Cherries also contain the same antioxidants found in grapes, and the anti-inflammatory properties can help reduce inflammation, and so help to soothe joint pain.

Cherries have a high level of Quercetin, which is a powerful plant antioxidant with anti-cancer properties. Recent research from Journal of Nutrition has shown that this substance helps prevent lesions, which may turn cancerous, from forming in the colon.

Charred hamburger meat, as well as other meat which may char when barbecued, contain dangerous cancer-forming chemicals. Substances in cherries are able to reduce the formation of these chemicals, which can potentially lead to colon cancer.

The antioxidants loaded into cherries help the body fight the free radicals which attack the skin causing us to look old.

Pectin, a soluble fiber found in cherries and other fruit such as apples and berries, assists the digestion by slowing down the absorption of sugar and fat, can help lower LDL (bad) cholesterol.

The pectin and the antioxidants in cherries which can reduce LDL cholesterol also helps to regulate heart rate, control blood pressure, and prevent strokes.

Cherries are one of the few known food sources of Melatonin, a natural hormone that helps control your sleep patterns. Melatonin helps to regulate the body’s circadian, often referred to as the body clock, which controls the natural cycle of sleeping and waking hours.

A study conducted on women between the ages of 40 to 70, suffering from inflammatory arthritis, revealed that consuming tart cherry juice twice daily for 3 weeks, significantly reduced the pain in swollen joints.

A further study showed that long distance runners who drank cherry juice for a few days before the race had less pain after the race than those who drank other fruit juices.

Eating cherries helps to keep your memory up to speed because of the high content of antioxidants which keep the free radicals in check that may cause memory loss.

Sweet cherries have a much lower Glycemic index than other fruits, making them a healthier snack for diabetics trying to keep blood sugar levels down.

A cup of cherries contains only 100 calories but is loaded with 3 grams of fiber, which makes you feel full for much longer, and can help you lose weight by eating less. The extra fiber can also help the elimination of waste from your body so that it is not stored as fat.

The chances of suffering any sort of detrimental side effects from eating cherries, are extremely low, provided that you are not allergic to cherries. If you have any allergies relating to grapes, apples, peaches, apricots or hazelnuts, then chances are that you will also be allergic to cherries.

If that is the case, then you should give cherries a miss, to avoid suffering an allergic reaction which may include breathing difficulties, swallowing hassles, hives, nausea or diarrhea. Eating just a few cherries may also result in breathing problems, and low blood pressure, which could be life-threatening for some folks.

Cherries also contain sufficient fiber and carbs to cause bloating, gas and diarrhea, if you eat unusually large portions. Although cherries provide iron, potassium, vitamin C and potent antioxidants, over-consumption may cause problems.

By all means, enjoy eating the amazing, delicious cherries – but keep the portions to reasonable sizes for the best health benefits.

Why you should include cherries in your daily diet.

Here are just some of the reasons why you should eat cherries every day:

How to add cherries to your meals.

Also Read: 17 Sweet Cherry Recipes Around the Internet That You Must Try At Least Once

Cherries are healthy, delicious and versatile. There are different cherry varieties, mainly sweet, and tart cherries, which are also known as sour cherries. The taste of sweet cherries can range from slightly sweet to very sweet, while tart cherries have something of a sour-sweet flavor combination. You can purchase fresh cherries, canned cherries, cherry juice, and even dried cherries in most food stores.

Here are some innovative ways to include cherries in your meals: 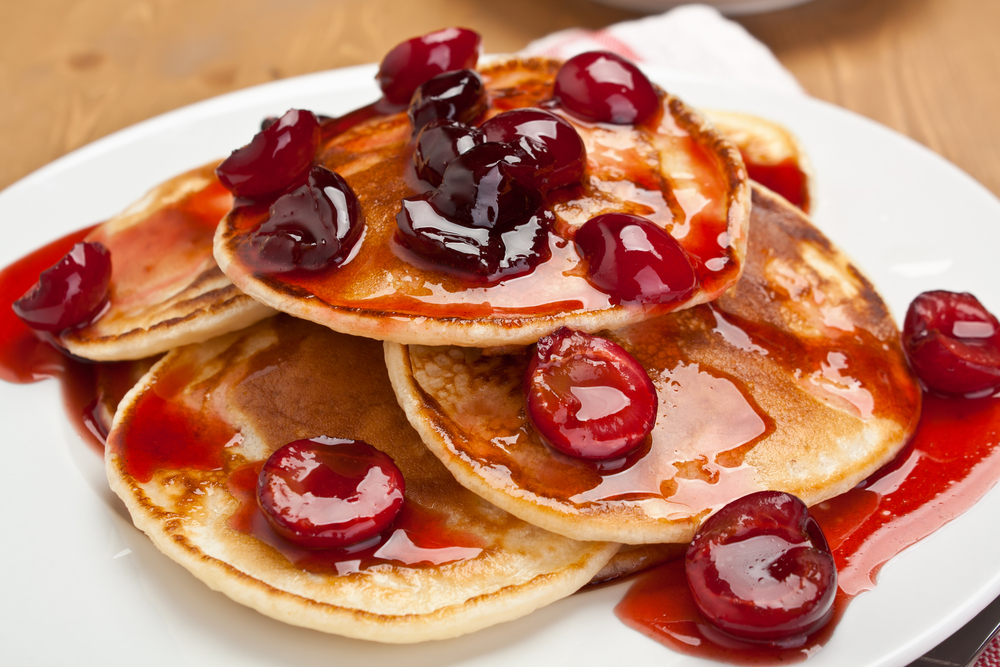 A Unique Cherry Recipe from France 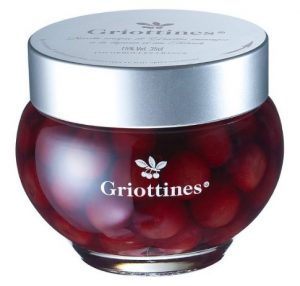 A short season – and a labor of love to eat!

Fortunately, cherries do well in the freezer, where they will keep for up to one year.

Eating fresh cherries is truly a labor of love! You have to remove the pits before you eat them, or spit out the pits as you go along!