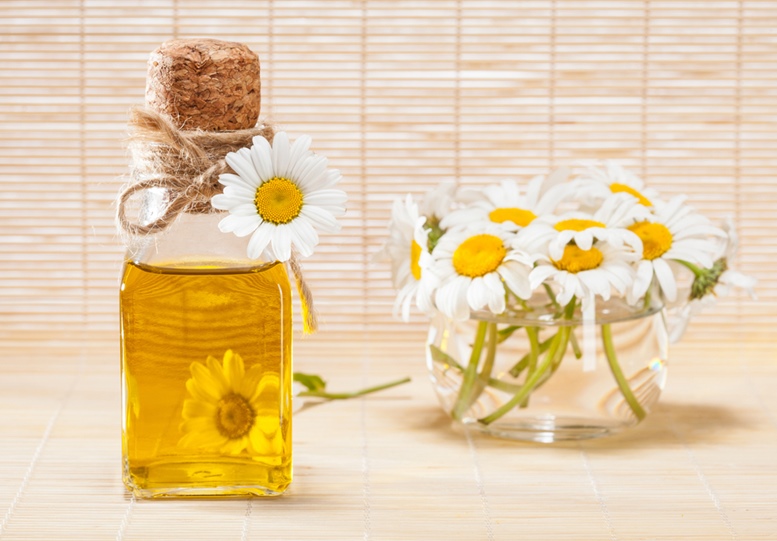 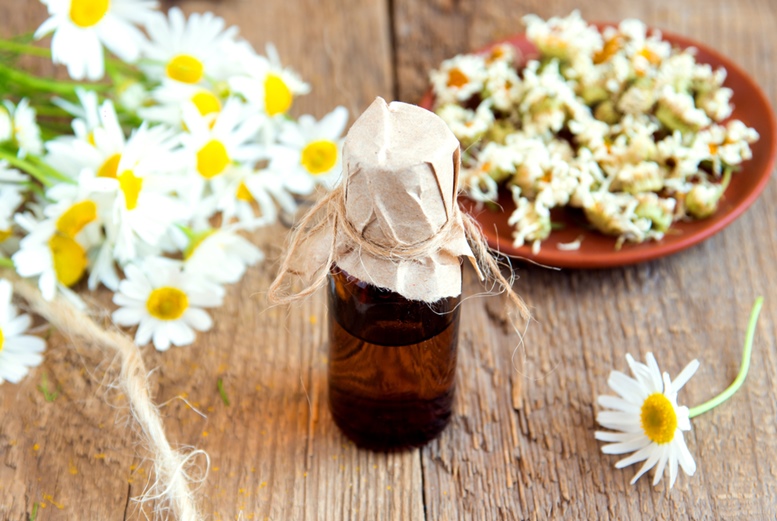 You probably know chamomile as tea used to help with sleep or to soothe an upset stomach. It is one of the most widely used herbs and arguably the most popular. It’s also one of the most expensive, especially in its oil form. If you love chamomile as much as we do, then this is definitely the right place for you! In this article, we will take a look at some of the top health benefits of this amazing herb, as well as its history and the reason it’s one of the most sought-after botanicals in the world today. 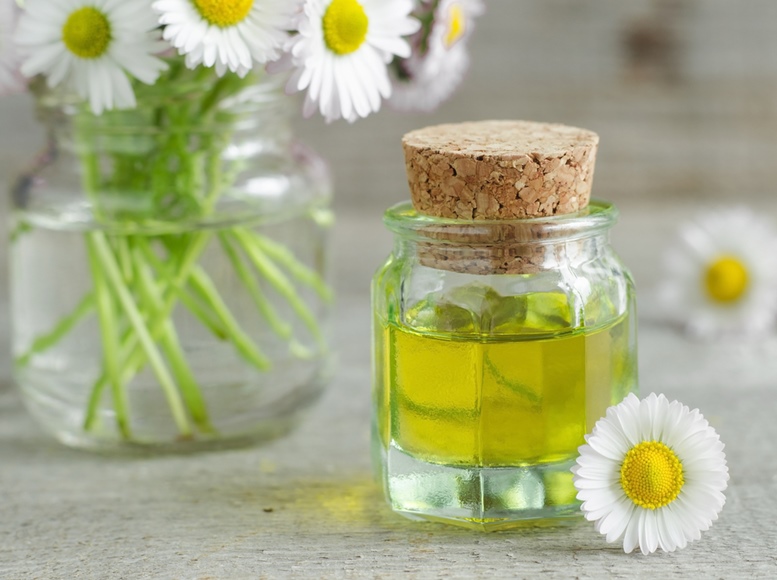 Chamomile actually comes from the Asteraceae family of plants, the same family where the sunflower and the daisy belong. Its name is derived from the Greek word khamaimēlon, which means “earth” or “ground” apple.

It is believed that the Egyptians were the very first people who used it, particularly as a cure and as a major ingredient for embalming. They valued the herb so much that they even dedicated it to the sun and revered it above any other herb they used. It was considered a miracle herb that ancient Anglo-Saxon manuscript even mentioned it as one of the “9 Sacred Herbs.” It is also labeled as a “plant’s physician” because of its remarkable ability to revive sickly plants when it is placed near them. It was highly valued even by doctors in England and was in fact a part of every physician’s medical bag back in the days.

The Two Most Sought-After Chamomile Varieties

There are actually several species of plants that carry the name ‘chamomile’, but there are two that are mostly considered by many for medicinal purposes. 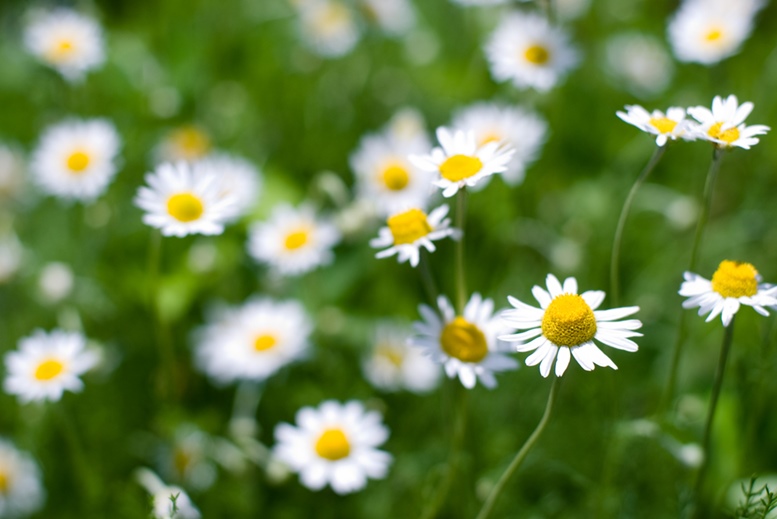 Chamaemelum nobile or Roman chamomile is a native of Europe, but is also grown in Argentina and North America. It is exported mainly by countries such as France, Great Britain, Belgium, Poland, and the Czech and Slovakian Republics. It is also referred to as English or garden chamomile and is used for creating fragrant chamomile lawns. The key components of this herb include volatile oil, valerianic acid, tannins, sesquiterpene lactones, salicylates, phenolic acids, flavonoids, coumarins, and cyanogenic glycosides. It is very popular in aromatherapy and has antispasmodic, anti-inflammatory, anti-allergic, and antiseptic properties. 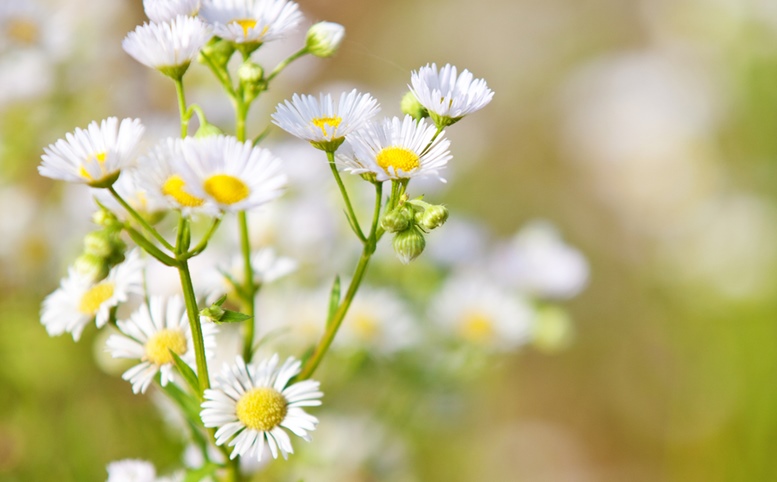 German chamomile, on the other hand, carries the scientific name Matricaria chamomilla, and is not perennial, unlike its counterpart. Most of the major components of this plant are similar to that of Roman chamomile. Its main active ingredients, however, also include farnesene, chamazulene, and terpene bisabolol. It is also rich in flavonoids and is considered to be antispasmodic, anti-inflammatory, antimutagenic, and anxiolytic. 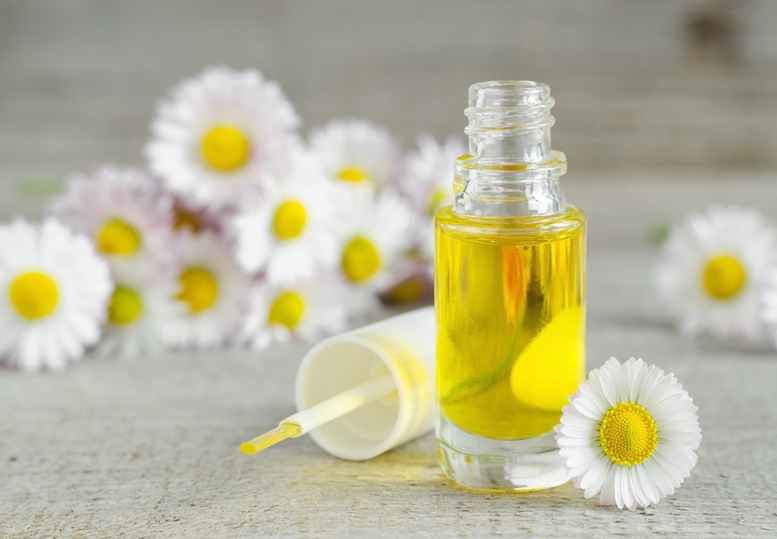 Both Roman chamomile and German chamomile can be used interchangeably. The only difference is that the former has a more pronounced bitter effect than the latter. Chamomile contains spiro-ether, an antispasmodic compound that helps relax tense and aching muscles, and is also what helps in relieving menstrual pain, as well as in promoting sleep. Due to its anti-inflammatory effects, it is also often used to ease labor pain in Mexico, especially among the rural communities in the country. In Puerto Rico, the herb is also utilized for treating asthma, and is actually considered as one of the country’s top home remedy.

Perhaps what makes chamomile very popular is its tea. It’s a staple for herbal tea enthusiast and simply a true classic! Along with peppermint tea and green tea, chamomile herbal tea is one of the most enjoyed teas in the world. The tea offers hints of floral sweetness and apple, and has a really palatable taste that makes it a favorite of many. Due to its floral notes and natural flavor, chamomile tea usually does not need sweeteners. For years, people have benefited from chamomile for its tea. It is often used in beauty salons because of its ability to help the facial muscles relax. 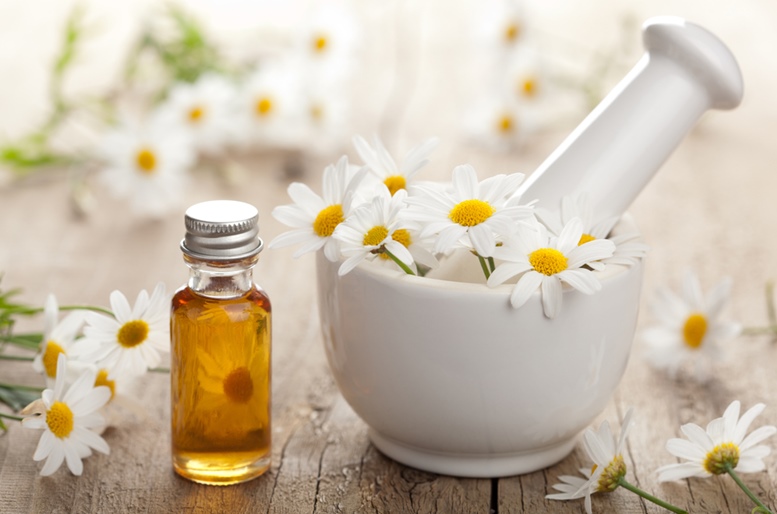 Nothing makes chamomile more popular than its medicinal value. It’s not called a sacred herb for nothing! Chamomile is especially potent when used in its oil form. Whether it’s extracted from Roman or German chamomile, chamomile essential oil can offer tons of practical health benefits. Let’s take a closer look at some of them:

If you’re familiar with Beatrix Potter’s classic The Tale of Peter Rabbit, you would remember that mother rabbit put young Peter to sleep with a small cup of chamomile tea. In turns out mother rabbit was right in choosing the herbal drink as research shows that chamomile has the ability to relax the blood vessels and promote sleep. It has sleep-inducing properties and can reduce levels of ACTH in the body, a stress hormone, which can keep the brain active even when it’s time for bed. One way you can use chamomile oil for promoting sleep is by using it with a diffuser. You can also rub 2 to 3 drops of the oil onto the soles of your feet before going to bed.

Migraine and headache pains are usually triggered or exacerbated by stress. This makes relaxation a vital part of the treatment process. You can bid adieu to your migraine pain with the help of German chamomile oil. It has analgesic properties that can help relieve pain, but most importantly, it has a calming influence that can really help relieve stress and reduce any pain caused by migraines or headaches.

An aching tummy may be a sign of an underlying problem, but it’s mostly related to indigestion. Whether you’re battling with constipation, diarrhea, or gastrointestinal issues, you can rub the pain away with a few drops of chamomile oil. The substance is well known to have a positive impact on various stomach problems and can also improve your digestive powers with its antiseptic properties. Moreover, if you are always experiencing bloating, you can apply the oil topically to help relieve the pain. Overeating and eating too fast are two common causes of bloating. You can always opt for a cup of chamomile tea, but if you are looking for a quick remedy, rubbing some oil on your tummy would also get the job done.

Are you looking for a natural hay fever remedy? While there is no absolute cure to allergy, there are things you can do to help reduce the symptoms. One is by taking advantage of the soothing properties of chamomile. Adding a few drops of its oil in a diffuser and inhaling it can help clear up your sinuses and even treat bacterial infections. More importantly, it can help stop allergy symptoms at their tracks. German chamomile, in particular, has been found by Indian scientists to carry potent anti-allergenic properties that inhibit histamine release.

Rheumatism can cause severe discomfort and pain and can really affect the quality of life of those who have it. One of the proven ways of managing pain related to this condition is massage. Combine it with the correct essential oil and it will dramatically reduce inflammation and improve movement. The essential oils of both German and Roman chamomile are among the best oils for different forms of rheumatism due to their anti-inflammatory effects. Adding 4 to 5 drops to 10ml of a carrier oil of your choice and then massaging it on the affected area will instantly improve circulation and reduce pain.

Chamomile has recently been reported to provide cardiovascular protection. Perhaps this is due to the fact that the herb is rich in flavonoids. In a study reported by The Lancet, more than 800 men aged 65-84 years were assessed, and those who had higher flavonoid intake from herbs like chamomile were found to have lower risk to coronary heart disease. The legendary ability of chamomile to reduce stress may also indirectly benefit people who have heart problems. Its aroma can help reduce anxiety levels and promote sleep, two of the most important keys to maintaining healthy blood pressure levels and reducing risks for other heart problems.

The discovery that chamomile might be able to help fight off cancer should not be a surprise, considering the huge potential of this herb. Recently, there have been evidences that suggest the plant may be capable of inhibiting the growth of cancerous tumor, and may even be used as a natural treatment for the big C. This ability of chamomile may be attributed to apigenin, one of its antioxidant contents, which also appear to be able to stop ovarian, breast, prostate, and skin cancers.

The benefits of chamomile oil are not limited to your internal health only, but also to the health or your hair and skin as well. Again, the herb has anti-inflammatory and antimicrobial properties and can be used to treat different skin and hair problems. A lot of women actually use it as a natural toner, mixing it with different other ingredients to create their own homemade facial treatments. When applied externally, chamomile oil can also help reduce skin irritation, as well as alleviate skin rashes and itching. It can also accelerate the healing process of wounds and may be able to reduce the appearance of scars. Thanks to its rich antioxidant content, it may also help fight the signs of skin aging. Finally, when applied on the hair as a final rinse during a bath, chamomile may be able to nourish the hair and give it a healthy glow. It can also help keep the scalp health and fight off dandruff.

Should You Use Chamomile Essential Oil? 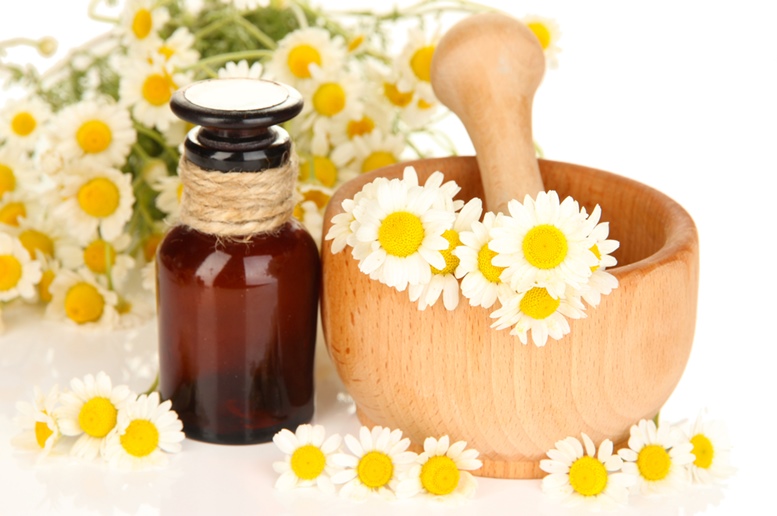 Both the German and Roman versions of chamomile are considered non-irritant and non-toxic, and are safe to used internally and externally. However, experts still recommend that it be used along with a safe carrier oil. It’s also important that you perform a skin patch test before using chamomile oil liberally and for the first time to find out whether you are allergic to it or not. Moreover, doctors do not recommend it to pregnant women and nursing moms. Just like other forms of essential oil, chamomile oil may have emmenagogue properties, which means it can stimulate blood flow when used in high amounts.

Are you a user of chamomile? Why don’t you share your experience with us on the comments secant below and give us additional tips about this magnificent herb? We would really love your insight! 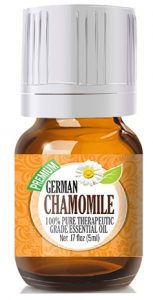 Check Out Other Essential Oils Here 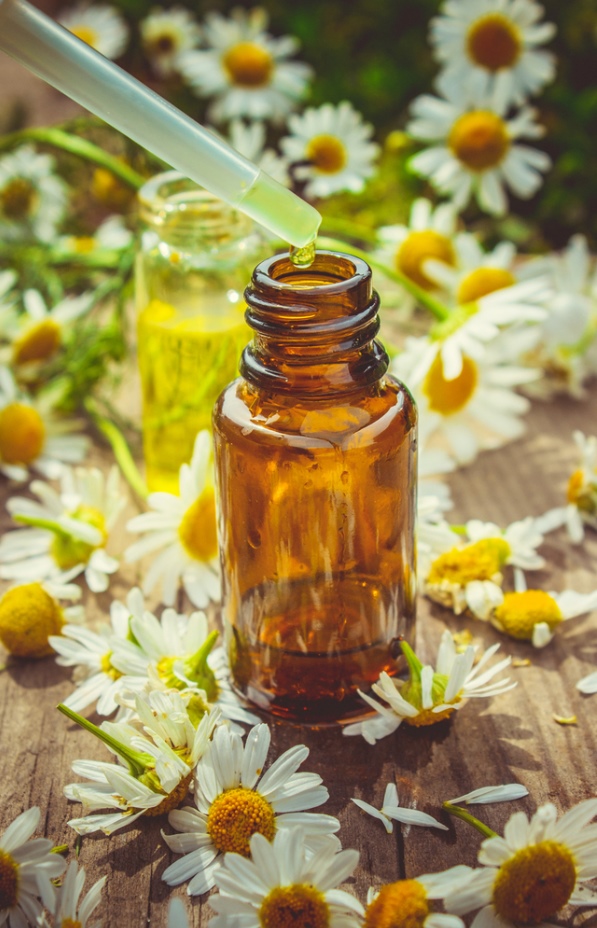