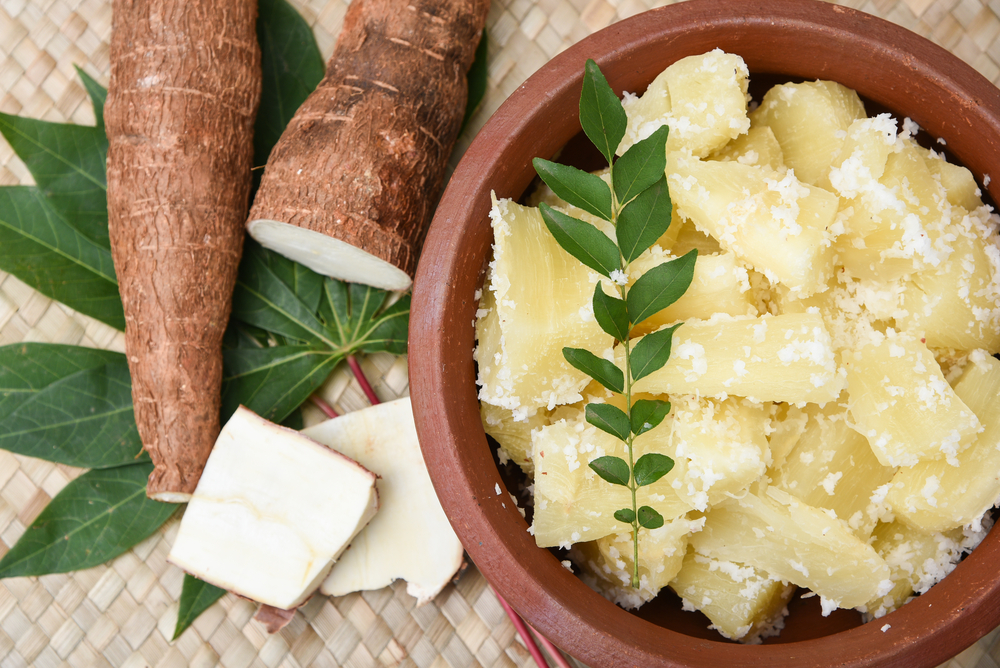 The cassava plant, at times called by most people the ‘bread of the tropics’, is a staple to almost half a billion people in the developing world in place of rice. The plant is packed with a punch of health benefits that range from being a rich source of many vital nutrients to having properties that enable it to fight chronic diseases like diabetes mellitus. 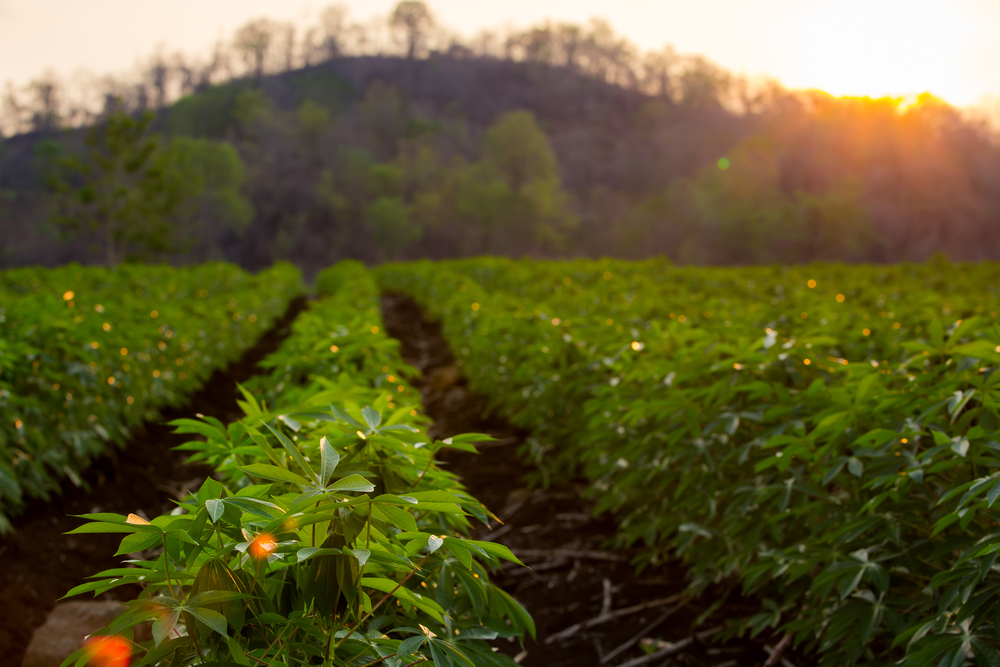 Small cassava in Thailand. Thailand is top Exporter of cassava in the world.

The cassava is a woody shrub whose scientific name is Manihotesculenta. It is native to South America in particular central Brazil where evidence shows it was first domesticated there, not more than 10000 years ago. It is of the spurge family Euphorbiaceae.

The cassava plant is a rich source of soluble dietary fiber. Fiber is vital in the body as it adds bulk to food preventing constipation, lowers blood sugar levels by slowing absorption of sugar in the blood aiding in preventing diabetes and it lowers absorption of cholesterol in the gut. Fiber also protects the mucosal lining of the colon from exposure to toxic substances by binding cancer causing chemicals to it as well as providing a lasting feeling of satiety hence an individual does not feed too much.

Carbohydrates are vital nutrients in the body as they play a part in major functions including providing energy, breaking down fatty acids, regulation of blood glucose as well as sparing the use of proteins for energy metabolism.

Calories are energy stored in food. They are important as they are involved in various important processes in the body, for example, metabolic functions, fighting infections, tissue growth and repair and muscle movement.

Cassavas generally are low glycemic index foods. This means that they control the release of glucose into the blood stream and at a controlled steady and sustained rate. This helps keep blood glucose at a regular state hence preventing against diabetes.

Cassava is rich in various vitamins such as folate and vitamin C. These are very good for the body’s immune system. Folate helps in the production of new cells in the body hence needed for making our genetic material while vitamin c maintains good bone health, acts as a protective shield by attacking the nucleus of a virus and bacteria. By doing this it renders the virus dead.

Cassavas are a rich source of vitamins example thiamine which is vital in energy metabolism and nerve function, folic acid which is vital in making DNA and new cells, pyridoxine that’s vital for proper brain functioning. The vitamins also help alleviate stress and anxiety by promoting good moods.

Cassava flour is believed to have elements that are important for a balanced nervous system by fighting anxiety and stress.

Cassava leaves have nutrients that aid in faster wound healing. A mixture of the leaves and aloe vera applied on a wound facilitates faster healing of the wound.

Gluten is an allergic protein. The fact that cassavas are gluten free means that they are the perfect candidates for making meals for celiac patients.

The cassava plant has compounds which enable it to fight cardiovascular diseases. The antioxidants work by lowering the bad cholesterol in the body and this ensures good heart health and clear arteries ensuring efficient blood flow.

The leaves of the cassava are rich in valine and isoleucine which are amino acids. The protein in the cassava is vital for various functions in the body including body tissue repair, alternative source of energy in the absence of carbohydrates and formation of vital components such as hemoglobin.

The roots and leaves of the cassava when mixed with water to make a paste and the paste applied to hair reduces hair loss by making the hair stronger and boosting growth.

Vitamin K is important in the body as it prevents a mineral loss like calcium which is easily dissolved. The vitamin also promotes bone mass building by promoting osteotrophic activities in bones. It also contributes immensely to treating Alzheimer’s disease and this is done by limiting neuronal damage in the brain. The vitamin K also protects the brain from losing cell function.

Phytochemicals in particular saponins lower cholesterol levels in the body by binding to cholesterol and to bile acids as well hence preventing their absorption through the small intestine. The antioxidant components also protect the cells from damage by free radical hence preventing occurrence of diseases like cancer.

Due to its richness in vitamins like folate and thiamine and minerals and other vital nutrients, the cassava is recommended during pregnancy for proper fetal development. Lack of these nutrients could lead to neonatal defects which could be life threatening to the infant and other complications that might hinder the performance of an infant.

Cassavas are rich sources of potassium. This mineral is important as it helps in regulating heart rate and blood pressure. This control helps in curbing irregular heart rates hence controlling hypertension in hypertensive patients.

A paste formed from mixing peels off the cassava and water when applied to a pre-washed face occasionally brightens and hydrates the skin giving an individual a younger look. The paste opens up the pores allowing for good air and blood circulation hence the skin looks healthy and glowing.

Digestive resistant starch lowers blood glucose levels after meals and also improves insulin sensitivity. It passes in the digestive tract without being digested. It plays an important role in the body as it feeds gut bacteria in the colon thereby reducing inflammation and reducing harmful bacteria.

Side effects of too much cassava 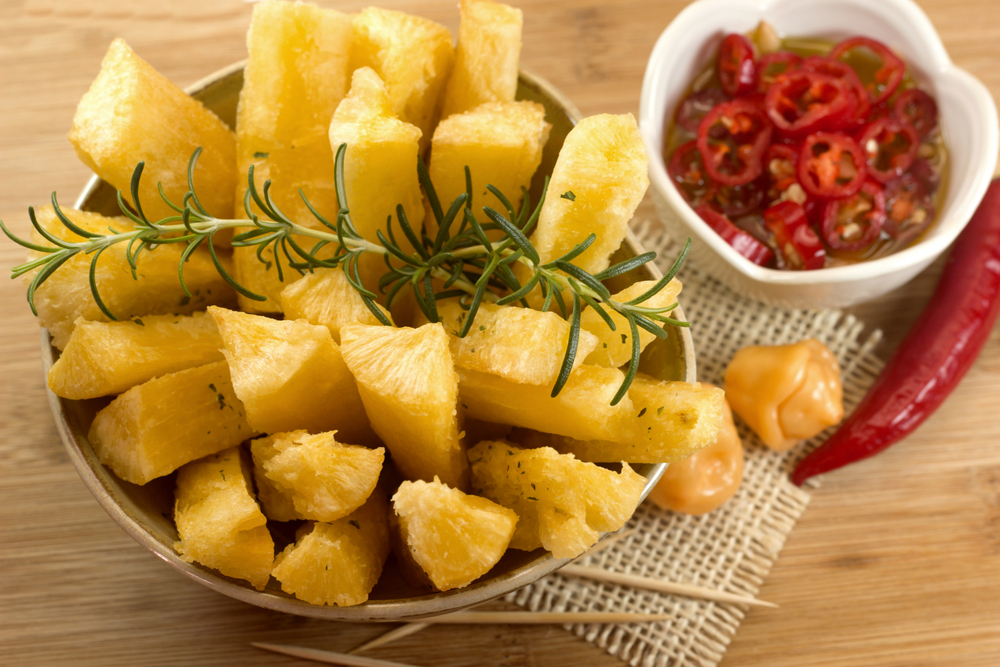 The root composes small quantities of cyanogenic compounds. Accumulation of cyanide causes poisoning. Some of the symptoms of cyanide poisoning are vomiting, dizziness, headaches and at times even death.

The cassava is rich in calories and carbohydrates. Long term consumption without control can lead to fast and serious weight gain. Hence one should watch on the amount.

Toxic elements found on surface and peel of the bitter variety of cassava affect the liver, kidneys and some parts of the brain. This as a result of damage to the pituitary gland which is a vital gland that produces critical hormones that control various bodily functions.

Garri, a staple in Nigeria is made from cassava which contains hydrocyanic acid. This, when consumed in large quantities, can lead to some serious eye defects.

Studies conducted by the University of Michigan Health System show that too much consumption of cassava can lead to hemolysis. A condition in which the red blood cells burst. This is a result of the saponins contained in the root.