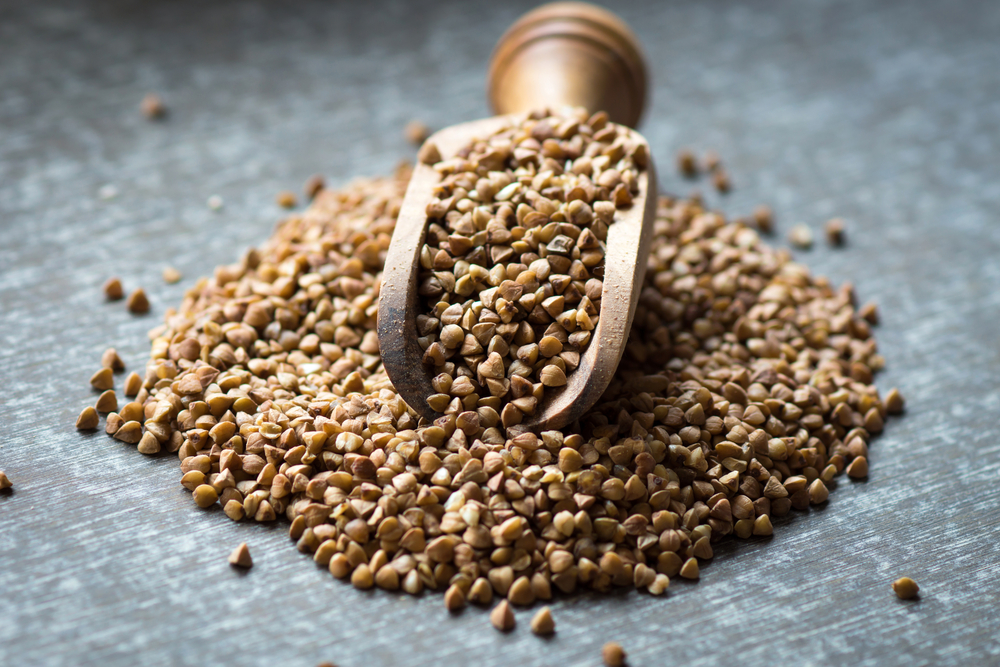 Buckwheat is not on people’s plates as much as it should be. This food is packed with a variety of nutrients, such as dietary fiber, B vitamins, magnesium, potassium, and all nine essential amino acids (which are rarely found in plant-based foods). On top of that, the buckwheat plant is not susceptible to any major pests or disease, which means that it’s easy to grow. This makes it an incredibly inexpensive food item that you can add to your cart the next time you go grocery shopping. 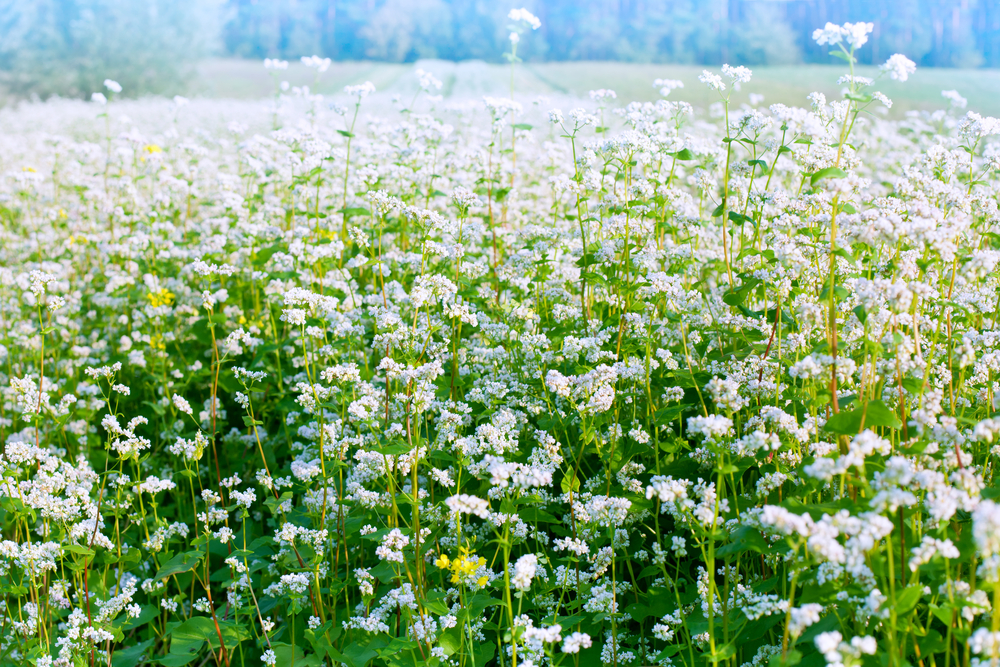 Despite what some people may think, buckwheat is actually low on the glycemic index. The carbohydrates that are present in this food are complex, which means that they’re slowly absorbed into the bloodstream. Thanks to these complex carbs, buckwheat will help you fight imbalances in blood sugar levels. If your nutrition doesn’t help you fight these imbalances, then you may start to experience fatigue, inflammation, and diabetes. By consuming more buckwheat, you’ll notice improved blood sugar levels and reduced insulin resistance.

By eating just one cup of buckwheat, you will be consuming six grams of dietary fiber. This will not only hasten the transportation of food through your digestive tract, but it will also make you feel full for an extended time period. Dietary fiber is a nutrient that’s extremely important for the regulation of bowel movements. Thanks to its antioxidant content, buckwheat is also able to protect your digestive organs from infection, cancer, and other health-threatening complications. Buckwheat is known for being a natural probiotic as well, meaning that it can nourish the good bacteria in your gut.

When it comes to appearance, texture, and taste, many would say that buckwheat is almost the same as barley. However, there is one huge difference between these two foods – buckwheat is gluten-free. If you’re suffering from celiac disease or have gluten sensitivity, then know that you can indulge in buckwheat. Buckwheat can be a great substitute for rye, oats, barley, and wheat.

Buckwheat contains a lot of different compounds that promote heart health, such as copper, fiber, magnesium, and rutin. In fact, buckwheat is considered to be one of the best sources of rutin, which is an antioxidant known for preventing blood clots, reducing blood pressure, and decreasing inflammation. This food will have a good effect on your blood lipid profile, which will greatly reduce the risk of heart disease. By consuming buckwheat, you will increase your good cholesterol levels, while lowering your bad cholesterol.

Women can greatly benefit from consuming buckwheat more often, since it is known for having anti-carcinogenic effects on the development of breast cancer cells. This food is also responsible for reducing the risk of colon cancer. This is mostly due to the fact that buckwheat contains a lot of dietary fiber, a nutrient known for helping your body operate at a healthy level.

Although buckwheat will provide you with a number of health benefits, this is probably the most important one. You need a strong immune system in order to be equipped to fight against different diseases that may attack you. Buckwheat contains a lot of antioxidants, such as selenium, phenolic acid, flavonoids, and tocopherols, all of which are known for finding and eliminating free radicals from your body.

Not only will buckwheat help reduce the intensity or frequency of asthma attacks, but it may also prevent children from developing asthma. Children who don’t consume enough grains or grain-like foods have a higher risk of developing asthma, simply because they are deficient in important anti-inflammatory nutrients, such as magnesium and vitamin E.

Vegetarians and vegans should make sure to include more buckwheat into their diet. The reason why this food is so important for people who don’t eat meat is because they contain quality protein, which you won’t always find in plant-based foods. Protein is essentially made up of different compounds known as amino acids. Although they’re rarely found in plant-based foods, buckwheat contains all nine essential amino acids. Not only does buckwheat contain these important amino acids, but it also packs a lot of protein. In just 100 grams of buckwheat, there is 13 grams of protein.

Buckwheat contains a lot of B complex vitamins, such as folate, niacin, pyridoxine, riboflavin, pantothenic acid, and thiamin. All of these vitamins play a vital role in improving your skin and hair health. They will also protect your skin against damage from sun exposure and other different environmental factors. Additionally, the antioxidant rutin found in buckwheat can reduce the chance of premature wrinkles appearing on your skin. On top of that, the protein content of buckwheat is needed for normal hair growth.

Thanks to a particular amino acid known as tryptophan, buckwheat will help you battle depression. Tryptophan is important for your mental health because your body uses it to produce the feel-good hormone called serotonin. Not only will tryptophan reduce the risk of depression, but it is also linked to improving quality of sleep.

If you’re looking to shed a few pounds, then you may want to start eating more buckwheat. This food is high in fiber, which means that it will make you feel full for extended time periods. On top of that, buckwheat also contains fewer calories than other foods similar in taste, such as barley or wheat.

Most grains are filled with different toxins, because farmers use excessive amounts of pesticides and fertilizers on the crop in order to make it grow more easily. However, the great thing about buckwheat is that it grows incredibly fast, so there is no need for the use of herbicides and pesticides. Because of this, buckwheat contains fewer toxins than many other crops.

Buckwheat can be a great ally in fighting water retention, a condition where your body retains water in your cells, which causes your body to bloat up. The bloating that occurs as a result of water retention appears as swelling of face, legs, hands, and feet. Thanks to the different flavonoids buckwheat contain, it will help you fight water retention. 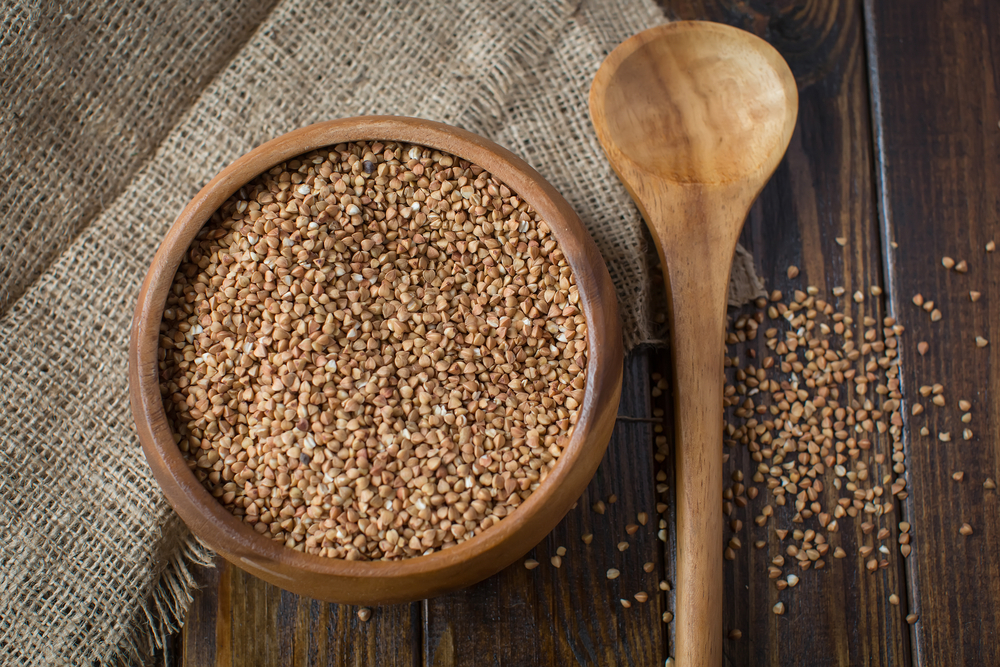 Tips to Add More Buckwheat into Your Diet 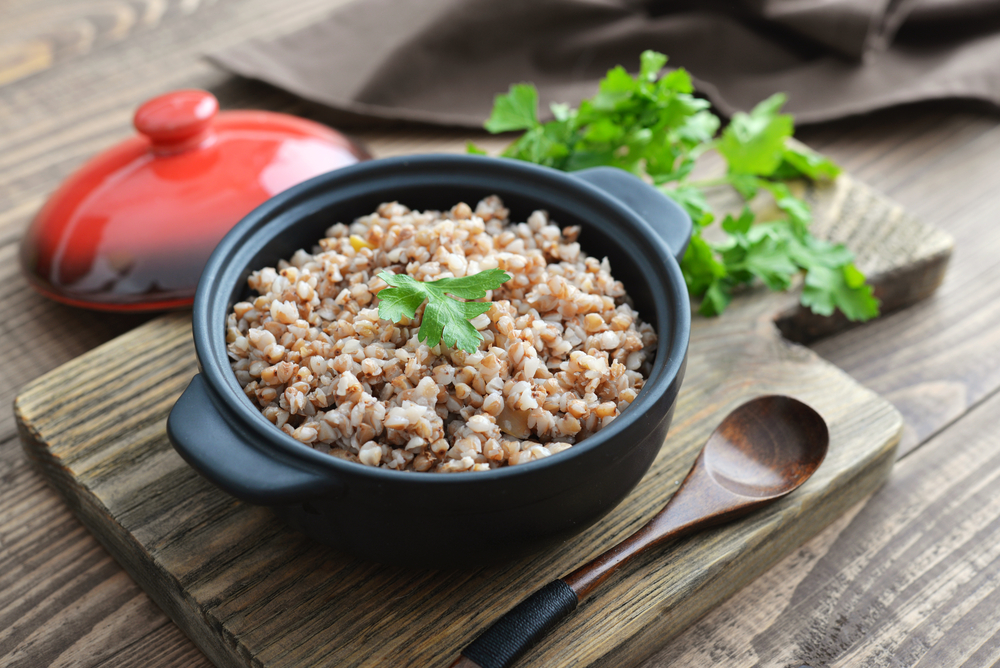 Dangers and Side Effects of Eating Too Much Buckwheat

In some parts of the world, buckwheat is not that common, so you may not have tried it before. With that being said, you may have an unknown allergy to it. Additionally, some people can develop an allergy by eating too much buckwheat for an extended time period. This is why you should always consult a doctor before deciding to add a new food into your diet that you will eat regularly. Buckwheat allergy is somewhat common in people who are allergic to rice.

Aside from causing allergic reactions in those suffering from buckwheat allergy, this food is not known for being hazardous to your health in any other way.

Whether you’re a vegan with a goal of increasing your intake of complete protein or simply want to improve your overall health, then the addition your diet needs is buckwheat. This food will provide you with all nine essential amino acids, which are not often found in plant-based foods. Buckwheat will also improve your heart health and digestion, reduce the risk of cancer, diabetes, and arthritis, and strengthen your immune system. 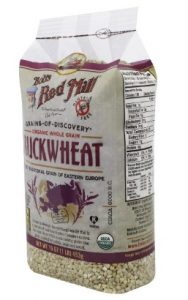