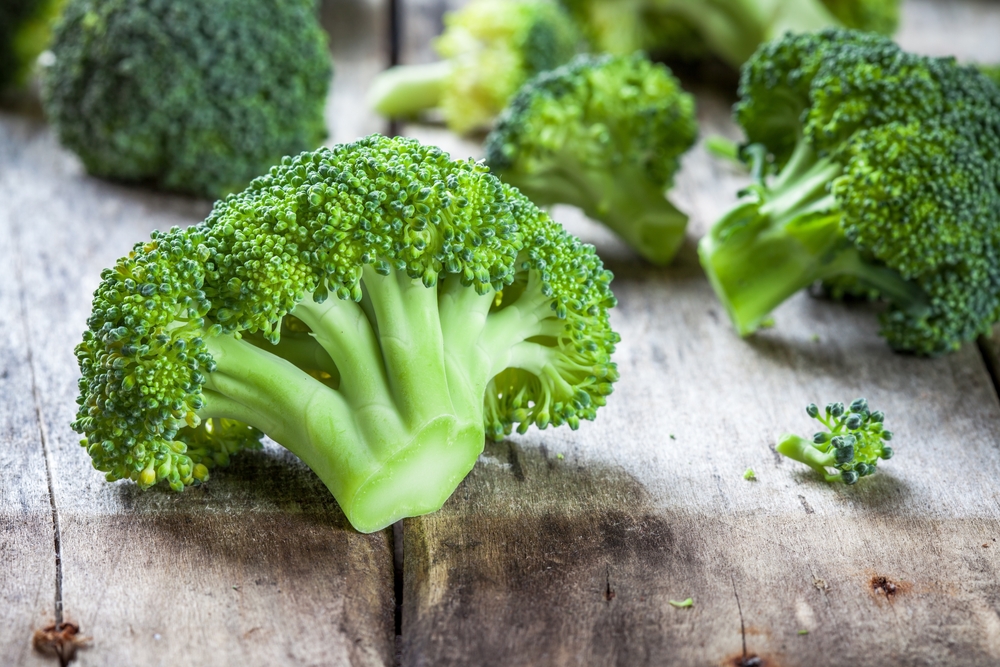 The word broccoli comes from the Italian plural of broccolo, which means “the flowering crest of a cabbage”. Indeed, broccoli has a large cluster of flowers, also referred to as a ‘head’ of broccoli, usually green in color and arranged in a tree-like structure branching out from an edible stalk. Broccoli resembles cauliflower. Both belong to the cruciferous vegetable family, which includes kale, Brussels sprouts, bok choy, cabbage, collard greens, rutabaga and turnips.

Broccoli is probably the healthiest food out there. Broccoli is one of the best-known cruciferous vegetables and is enjoyed worldwide in many different kinds of cuisine. It is often boiled or steamed but may also be eaten raw. If you are trying to eat healthier, cruciferous vegetables like broccoli should be at the very top of your grocery list. It is rich in antioxidant, and it is known to have cancer-fighting features. 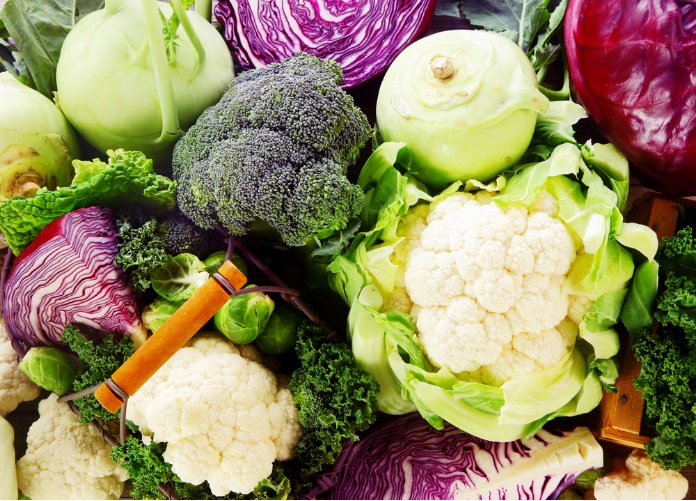 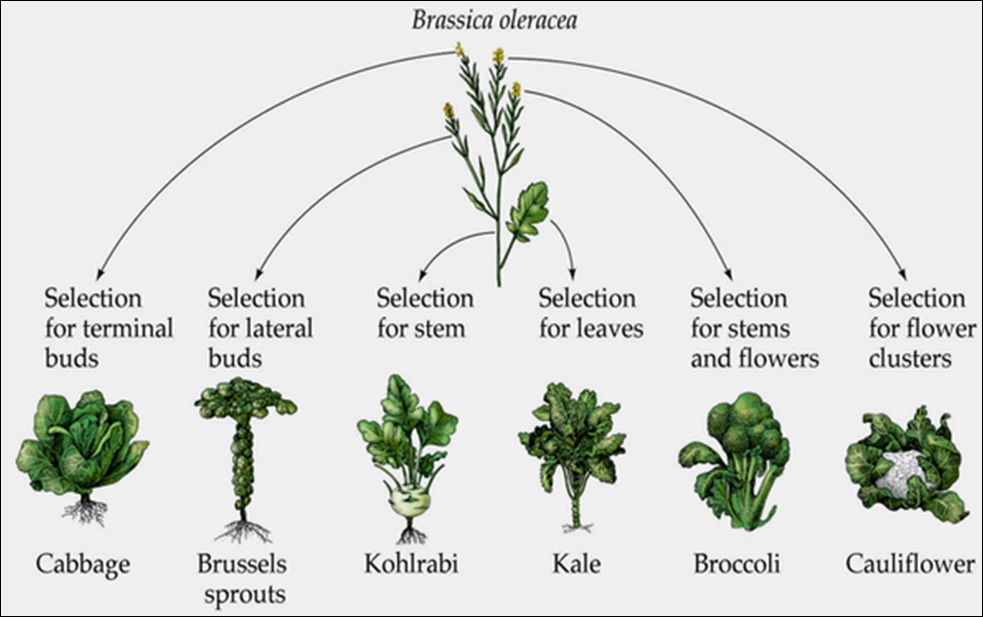 Image of the cruciferous vegetable family

Broccoli is recognized as an excellent source vitamin C, K, B1 and B2, which means it can provide more than 20% of the Dialy Value our body needed. Among all 100 of our WHFoods, broccoli represents our 3rd best source of vitamin C, 10th best source of vitamin E, and 16th best source of vitamin A (in the form of carotenoids). One hundred gram of fresh broccoli provides 89.2 mg or about 150% of RDA of Vitamin C, 100g vitamin E and 63 µg of folate. Vitamin C is a powerful natural antioxidant and an immune modulator helps fight against flu-causing viruses. Vitamin K is a fat-soluble vitamin that functions as a coenzyme and is involved in blood clotting and bone metabolism. Folate is important for women during pre-conception and pregnancy to prevent neural tube defects in the newborns.

Boost your mineral intake by enjoying broccoli raw or cooked. Broccoli is a good vegetable source of major mineral elements such as Na, K, Ca, Mg, Cl, P and S and trace elements such as Fe, Zn, Cu, Mn and Se for human nutrition. Studies have shown that broccoli is an important alternative source of Ca in segments of the population that consume a limited amount of dairy products. One of the other mineral abundant in broccoli is manganese, a trace essential mineral. Each stalk of broccoli contains 0.32 mg of the mineral, about 18 or 14% of the recommended daily intake. Manganese helps protect your cells from oxidative stress — damage to your cells that plays a role in the aging process. It also aids in brain function and bone development and helps you heal after an injury.

Broccoli, as well as all the cruciferous vegetables, are dietary sources of glucosinolates and their bioactive degradation products (isothiocyanates) (ITCs). Research studies show that ITCs significantly suppressed the NF-kappa B signaling system which is key to trigger our inflammatory response. Isothiocyanates have been shown to be especially effective in fighting lung and esophageal cancers. Studies have shown that risks of other cancers of the gastrointestinal tract and the respiratory tract can also be reduced by consuming broccoli.

While vegetables are generally low in fat content, broccoli provides us with an amazingly high amount of beneficial fatty acid. In 100 calories‘ worth of broccoli (about 2 cups) there are approximately 400 mg of omega-3s (in the form of alpha-linolenic acid, or ALA). That amount of ALA is equal to the amount provided by one soft gel capsule of flaxseed oil.

Vitamins, minerals, and phytonutrients all contribute to the antioxidant benefits provided by our food. Broccoli is a premiere example of a vegetable providing all three types of antioxidants. It has the strongest concentration of Vitamin C out of all the cruciferous vegetables. In addition, it also contains other strong antioxidants such as carotenoids lutein, zeaxanthin and beta-carotene. Total antioxidant strength oxygen radical absorbance capacity (ORAC) of broccoli is 1632 µmol TE/100 g. Food rich in antioxidant has been proven to help to prevent a wide range of chronic diseases such as cancer and alzheimer’s. They do this primarily through maintaining low levels of free radicals in your system which are often attributed to aiding in disease.

It’s no coincidence that more than 300 research studies on broccoli have converged in one unique area of health science—the development of cancer.In 1994, at the Johns Hopkins University School of Medicine in Baltimore, Maryland, food chemist Dr. Paul Talalay discovered that the isothiocyanates chemicals in broccoli can be cancer-fighting enzymes. He tested rats by introducing a carcinogen known to cause breast cancer in human beings. The rats that had consumed broccoli for several days prior had a 50% less occurrence of cancer rate.

Its cancer prevention effect is due to the unique combination of antioxidant, anti-inflammatory and pro-detoxification components in broccoli. Connections between cancer development and oxidative stress, chronic inflammation, and inadequate detoxification are so well-documented in the research that any food improving all three of these metabolic problems would be highly likely to lower our risk of cancer.In the case of broccoli, the research is strongest in showing decreased risk of prostate cancer, colon cancer, breast cancer, bladder cancer, and ovarian cancer.

Broccoli supports the anti-inflammatory process through its source of omega-3 fatty acids, flavonoids and sulforaphane. Flavonoids, especially the Kaempferol, helps fight against cancer and heart disease and has been shown to be preventative in adult diabetes onset. Sulforaphane can be directly produced from broccoli’s glucoraphanin content. Numerous anti-inflammatory mechanisms for sulforaphane are well known, including inactivation of the NF-kappa B pathway.

Being very rich in calcium (present by 47 mg. per 100 grams) and other nutrients such as magnesium, zinc and phosphorus, eating broccoli can be very beneficial, particularly for children, old people, pregnant women or lactating mothers, who are most prone to osteoporosis, weakening of bones and teeth, and calcium deficiency. Moreover, poor vitamin K intake is linked with a high risk of bone fracture. Just one cup of chopped broccoli provides 92 micrograms of vitamin K, well over 100% of your daily need. Consuming an adequate amount of vitamin K daily improves bone health by increasing calcium absorption and reducing urinary excretion of calcium.

The folic acid found in broccoli is vitally important because it allows the body to not only correctly absorb iron and avoid malformations of fetuses, but it also prevents cardiac diseases. By reducing the levels of homocysteine, folic acid present in broccoli helps to avoid cardiac infarction, arrhythmia, and atherosclerosis. It is also advisable for people with hypertension.

Thanks to the fiber, broccoli helps with bowel movements, eliminates toxins in the intestines by removing any remaining waste, and gives a good feeling of fullness. The ITCs of broccoli help protect the health of our stomach lining by helping prevent bacterial overgrowth or too much clinging by this bacterium to our stomach wall. Moreover, the vitamin B complex of broccoli help to synthesize digestive enzymes such as pepsin.

Broccoli is full of Vitamin A, Vitamin C, and calcium–all of which promote healthy hair. Calcium strengthens your hair follicles, and the vitamins stimulate the production of sebum, which is a natural moisturizer and conditioner for your hair. This means that more broccoli means stronger and shinier hair. In addition, the vitamin C also combats hair loss by eliminating free radicals.

Broccoli can help regenerate your skin due to containing glucoraphanin–an organic compound that is unique to broccoli and cauliflower. Basically, it can regenerate sun-damaged skin. Furthermore, the vitamin B, vitamin E, and beta-carotene help the skin to glow and look youthful. Now that’s a benefit I can get behind.

Side effects of eating too much broccoli 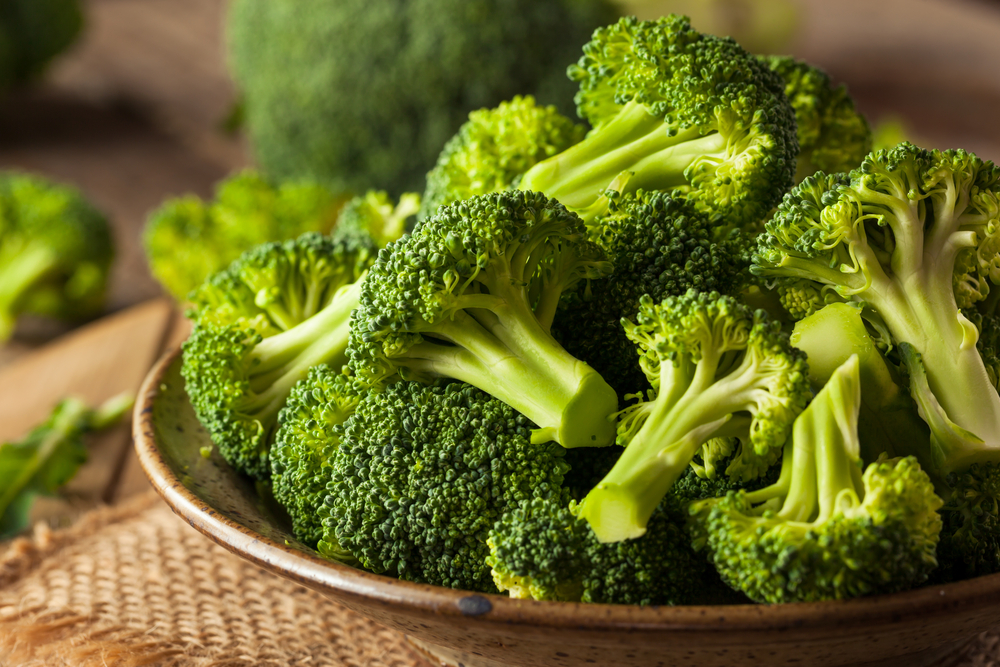 In general, broccoli is safe to eat and there is no serious effect. The most common side effect is gas or bowel irritation, caused by broccoli’s high amounts of fiber.In some people, contact with broccoli can cause an allergic rash, as some of the powerful compounds in the vegetable can be irritating to the skin.Information regarding safety and efficacy of broccoli in pregnancy and lactation is lacking.

For every 1 stalk of raw broccoli (~ 150 g), you will get the following macro- and micro-nutrients:

Broccoli was certainly an Italian vegetable. Native to the eastern Mediterranean and Asia Minor, sprouting broccoli was cultivated in Italy in ancient Roman times about the 6th century BC. It has been considered a uniquely valuable food among Italians.Some of the more recent aspects of broccoli’s history are its cultivation in Europe and transport to North America.Broccoli was brought to England from Antwerp in the mid-18th century by Peter Scheemakers. Thomas Jefferson, one of the founding fathers of the United States, was a fan of broccoli, importing the seeds from Italy to plant at Monticello. He recorded planting the vegetable there as early as May of 1767. Within a broader historical context, broccoli started out as a form of wild cabbage, and it took centuries of selective planting and agricultural practice to allow for its evolution into the varieties that we enjoy today.

While broccoli is grown commercially in many states throughout the U.S., about 90% of U.S. production takes place in the state of California. Cultivation of broccoli in California makes use of about 115,000 acres of land throughout the state, and about 1.8 billion pounds of broccoli are produced each year. U.S consumers average about 6.75 pounds of broccoli consumption per year. While this amount may not seem like a significant amount, it has increased consistently over recent decades. 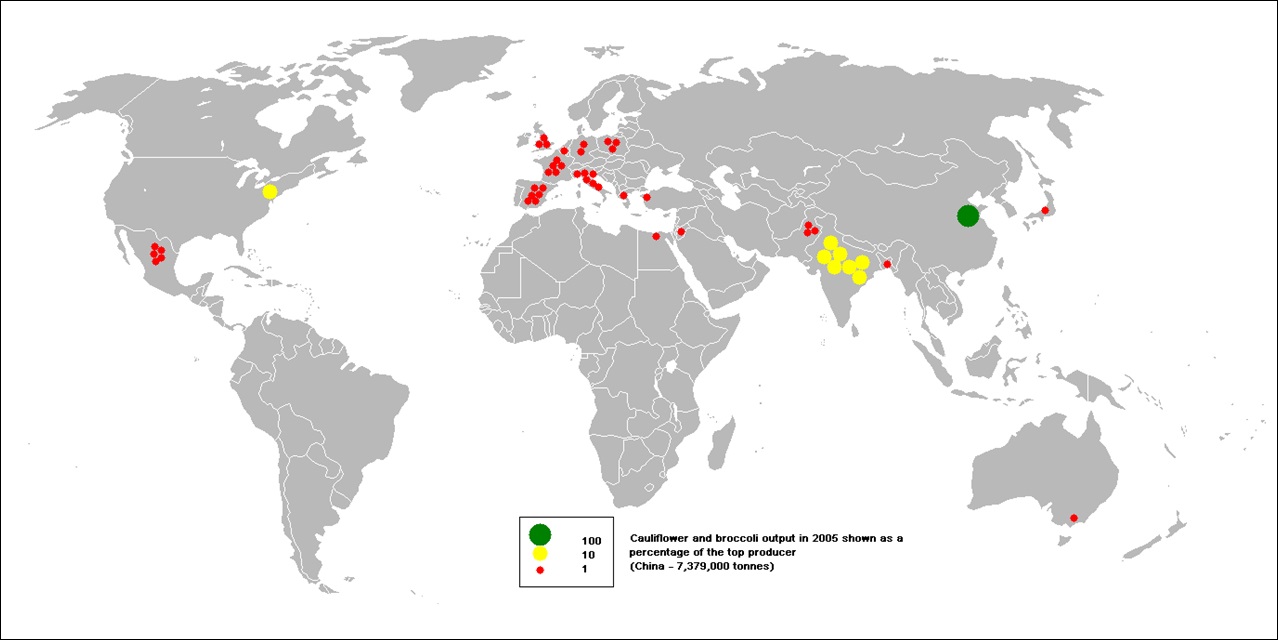 Production of cauliflower and broccoli worldwide 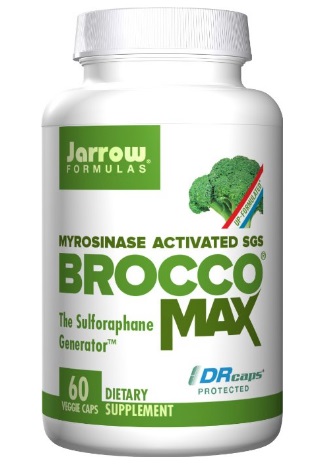 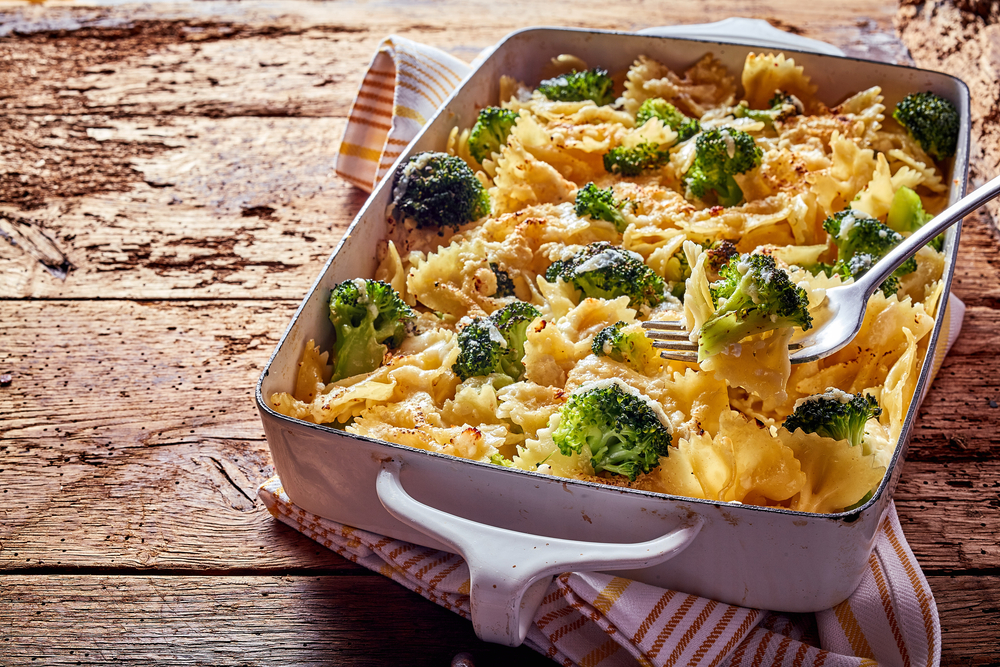