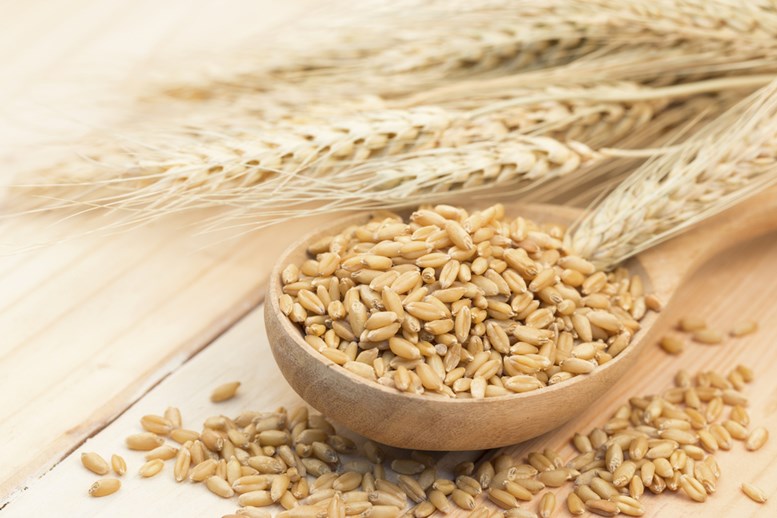 Barley is a nutritious grain for everyone and has been one of the most important food since ancient times. It ranks the fourth in quantity produced and cultivated area in the world among all the cereals. It has a rich nutlike taste and a chewy mouth feel. The appearance of barley kernels resembles wheat berries with a lighter color. Only 10% of barley is used for human food and is used for brewing beer and whiskey. Most barley is used for livestock feed.

The whole grain of barley contains 70% starch, 10-20% protein, 5-10% glucan, 2-3% free lipids and approximately 2.5% minerals. Barley is used as a whole grain, pearled, raw-grain flour, whole roasted grains mature barley flour and roasted grain flour. It is used in the production of breakfast cereals, stews, soups, pasta and noodles, as a coffee substitute and in porridges, sauces and baked products such as bread and flat bread. The most commonly used and consumed types of barley are:

The kernel of barley is a nutrition powerhouse. It contains complex carbohydrates, have a low-fat content and are moderately well-balanced in terms of protein to meet amino acid requirements, as well as minerals, vitamins and antioxidant polyphenols. Studies have shown that barley is an excellent source of dietary fibre, in particular, beta glucan, which is responsible for many of the amazing health benefits conferred by barley grains. 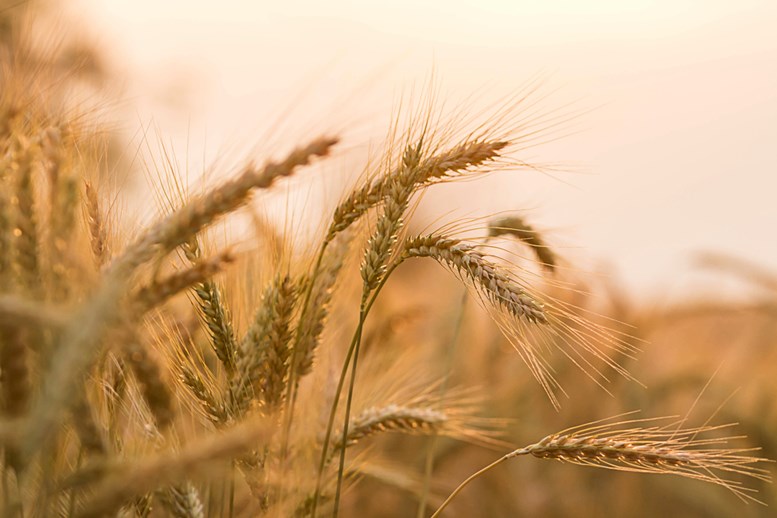 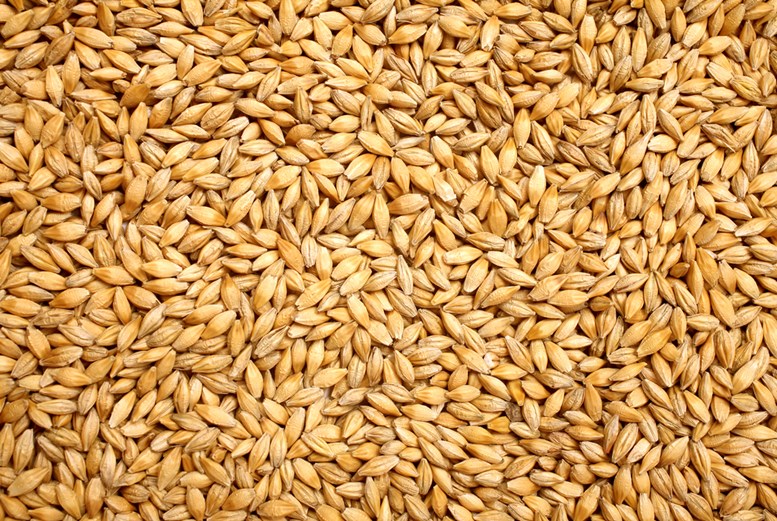 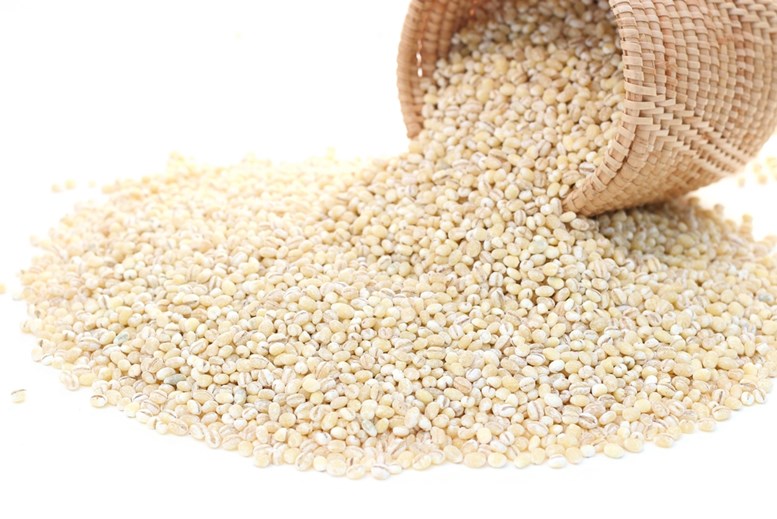 Barley is a good source of both soluble and insoluble dietary fibers and in particular, the beta-glucan. The beta-glucan content of cereals ranges from 1% in wheat grains, 3-7% in oats and 5-11% in barley. Beta-glucan is principally found in the aleurone layer and endosperm in barley. Compared to insoluble fiber such as cellulose, beta glucan is more flexible, soluble and viscous. It confers many health benefits including reducing the risk of heart disease, lowering blood cholesterol levels, increasing insulin response in diabetics and preventing obesity and cancer. There is an increasing interest in using beta-glucan from barley as a functional food ingredient. 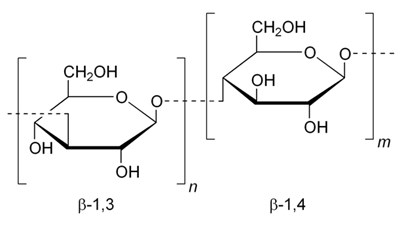 One cup of cooked barley provides you 42% of your daily selenium requirement. Selenium is an essential cofactor of several major metabolic pathways, including thyroid hormone metabolism, antioxidant defense systems and immune system. There is accumulating clinical evidence showing a strong inverse correlation between selenium intake and cancer incidence. The possible anti-cancer mechanisms of selenium might be attributed to its ability to stimulate DNA repair and synthesis in damaged cells, to inhibit the proliferation of cancer cells and to induce the apoptosis of cancer cells.

Barley contains a group of natural antioxidants called flavonoids. In general, cereals have only a small amount of flavonoids, except the barley grains contain measurable amounts of catechin (the same antioxidants found in green tea). Flavonoids as powerful antioxidants have anticancer, anti-allergic, anti-inflammatory, anti-carcinogenic and gastroprotective properties.

Besides flavonoids, barley also contains another group of antioxidants called Tocols (vitamin E, the same antioxidants found in carrots). The main source of tocols in our diet are vegetable oils, but a substantial amount of them are also present in barley. Tocol content of barley confers many health benefits such as modulating degenerative diseases, cardiovascular diseases and lowering blood cholesterols. The most active form of tocol is alpha-tocopherols which shows the ability to decrease lipid oxidation, platelet aggregation and inflammation.

Beta glucan is non-digestible but is highly fermentable in the colon. In comparison to other oats, beta glucan induced the maximum growth rate and cell proliferation rate of probiotics (the good bacteria in our guts). For this reason, the dietary fiber from barley grain is considered as prebiotics. Prebiotics increase the number and viability of bifidobacteria and lactic acid bacteria, which are two groups of probiotic bacteria that help to improve our digestion, mineral absorption and strength our immune system. In addition, prebiotics may also improve colon pH and intestinal regularity. To consume barley together with your probiotic supplement will help you to get most health benefits out of it!

Obesity is a global epidemic problems that affect more than one billion adults. Excess body weight increases the risk of coronary artery disease, stroke, insulin resistance, type 2 diabetes, hypertension and metabolic syndrome. Barley is rich in dietary fibers which are known to be effective in increasing satiety and reducing food intake. The addition of soluble fiber in the diet reduced the hunger and appetite perceptions than normal meals with low or low fiber. Clinical studies showed that a 12g increase in daily fiber intake is associated with a 10% reduction in energy intake. Subjects consuming barley before lunch felt significantly less hunger which is not observed in wheat and rice-containing foods. The satiating properties of beta-glucan are still unclear, but it is related to several stages of appetite regulation such as taste, gastric emptying, nutrient absorption and fiber fermentation. Beta-glucan increase the digesta viscosity which leads to delayed gastric emptying, enzymatic breakdown and mucosal absorption, which all together leading to early satiety sensations.

The whole grains of barley are rich sources of magnesium. One cup of cooked barley grains provides you 20% of your daily magnesium requirement. Magnesium is an essential mineral acting as a cofactor for more than 300 enzymes. Some of the enzymes involved in the body’s use of glucose and insulin secretion. It has been demonstrated that an increased intake of magnesium from food source reduced the development of type 2 diabetes in an 8-years clinical study involving over 40000 participants.

Furthermore, the beta-glucan fraction of barley also contributes to glycemic control. It reduces postprandial glucose and insulin responses and improves insulin sensitivity both in diabetic and nondiabetic individuals. Compared to other dietary fibers, a smaller amount of beta glucan is required to bring about the same level of reductions in postprandial glucose and insulin response. The benefits of eating beta glucan are attributed to its ability to increase digesta viscosity, which slows down the gastric emptying, enzyme diffusion and enzymatic breakdown of carbohydrate, which subsequently slow down the glucose absorption.

It has been well documented that elevated serum cholesterol is a risk factor for artery disease. Dietary fiber of barley grains play a major role in reducing serum cholesterol. The barley cultivars with the highest beta glucan content showed the largest reduction in total and low-density lipoprotein cholesterol, LDL (the ‘bad’ cholesterol). Moreover, barley is an excellent source of niacin, a B-complex vitamin that provides various protective action against cardiovascular risk factors. Niacin also helps prevent free radicals from oxidizing LDL which is the leading cause of developing atherosclerosis.

Side effects of eating too much barley 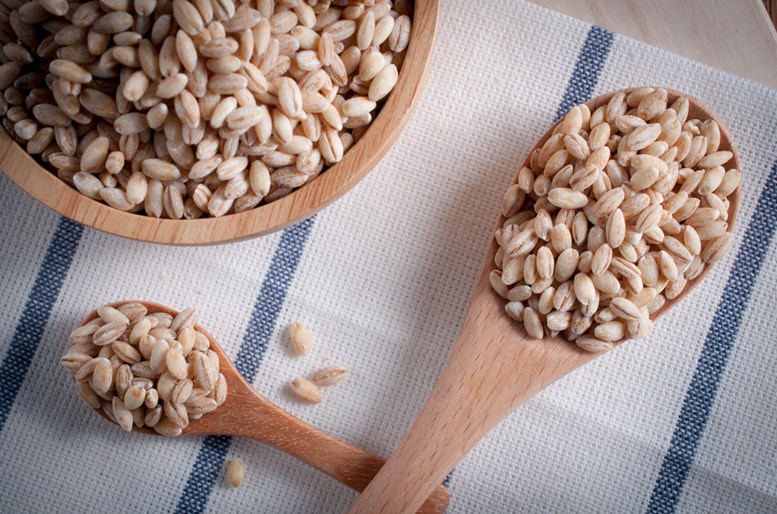 Barley is considered as one of the healthiest grains with numerous health benefits. It is safe to consume barley as a drink or use it as an ingredient. Precautions need to be taken for people with special conditions:

Moreover, excessive consumption of barley may lead to discomforts and some side effects, including: 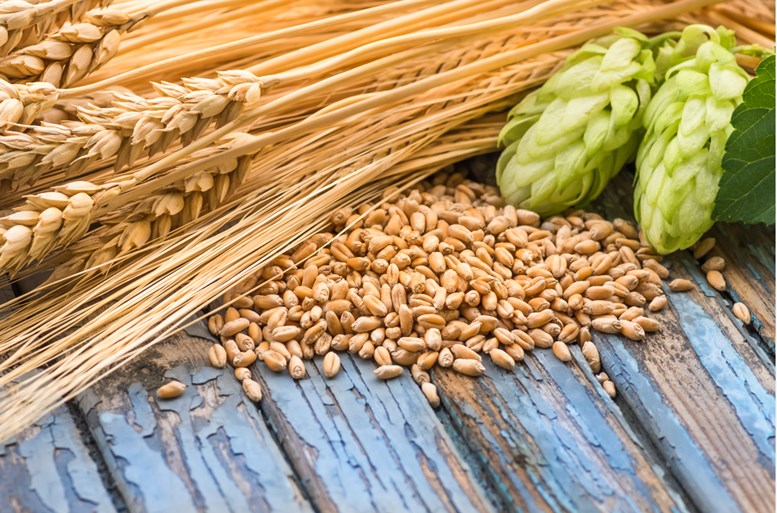 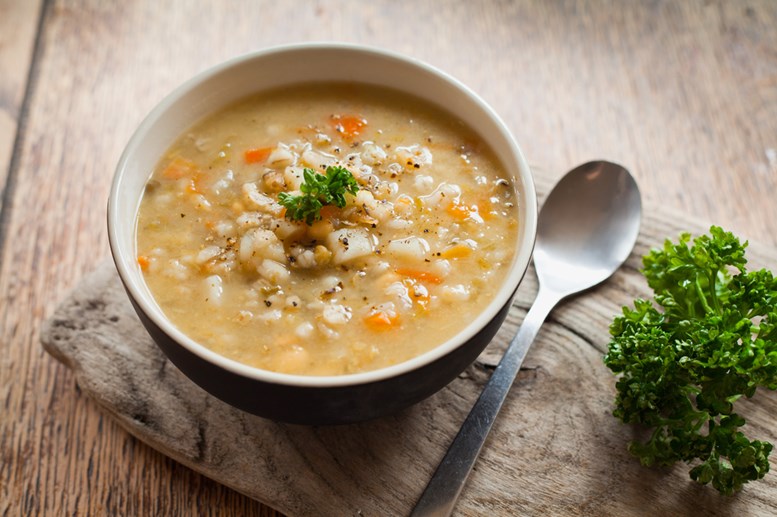 For every 100 g of cooked pearled barley, you will get the following macro- and micro-nutrients:

The percent daily values are based on 2000 calorie diet. 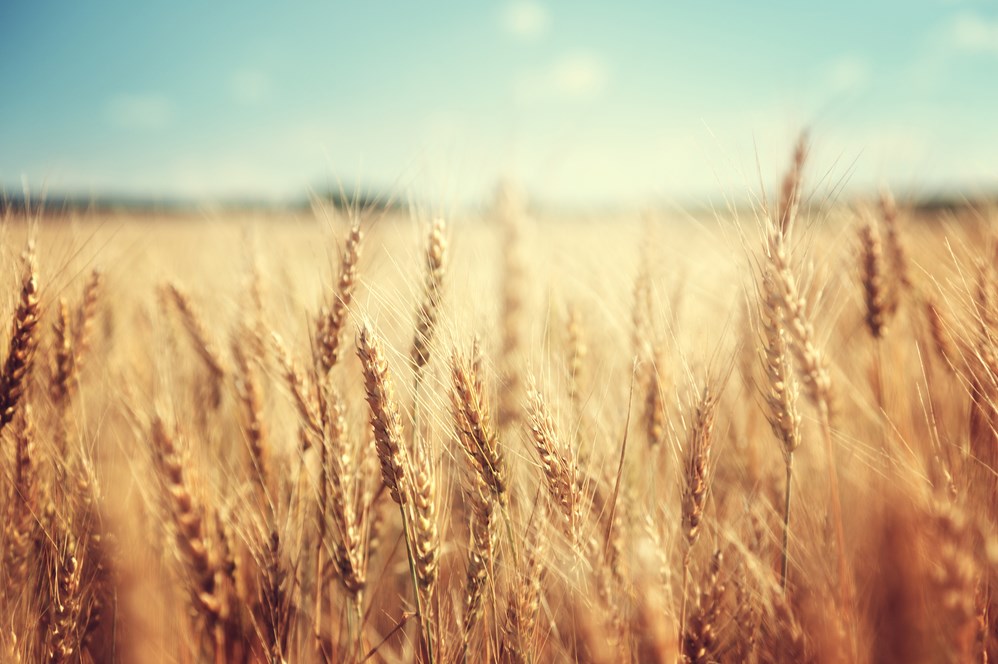 Barley has a long history of use as a part of human diet. Barley cultivation probably originated in the highlands of Ethiopia and Southeast Asia about 10000 years ago. Archaeological evidence suggested that the cultivation of two-row barley dated back to 8000 BC in Iran and the cultivation of six-row barley back to 6000 BC. Barley was transformed from a wild grass to a cultivated crop through a natural selection of the best variety for human harvest over thousands of years.

Barley was an important staple food for ancient cultures in Asia, North Africa and Europe. Barley was used to make bread, alcoholic and non-alcoholic beverage. Its historical importance is reflected in its former use as a currency and as a medicine. Roman records showed that barley was the food of the gladiators because it was believed to be able to increase their resistance and strength.

The first barley beer was probably produced accidentally. But in the past a few centuries, barley has been grown mainly for malt production beside been used as an animal feed. The increasing use of wheat, rice and maize in the human diet has led to a drastic decrease in barley consumption. The annual production of barley is about 140 million tons. Russia is the biggest producer of barley followed by Germany, France, Canada, Spain and Turkey. Two-thirds of the barley crop have been used for animal feed, one-third for malting and only 2% directly used for food. 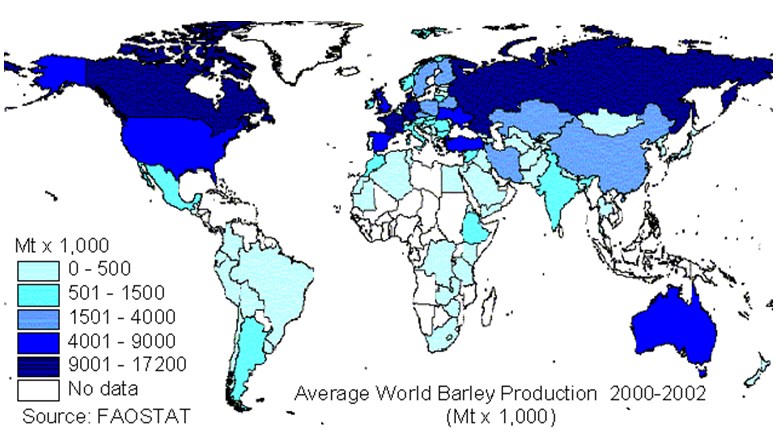 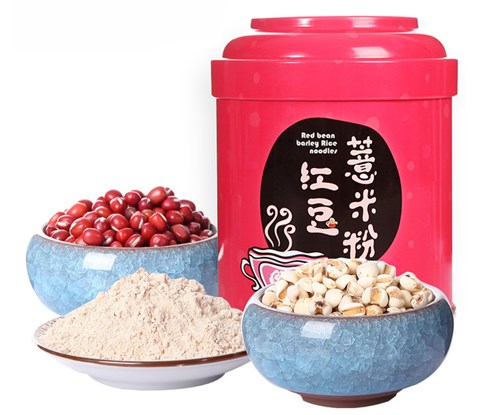 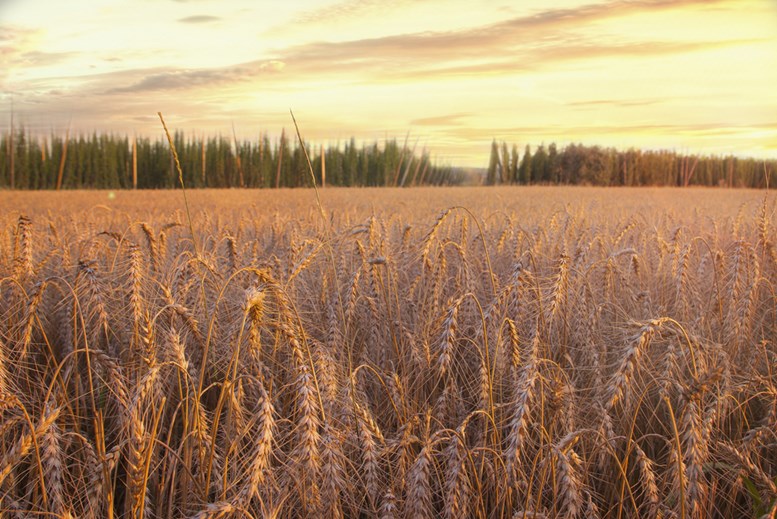