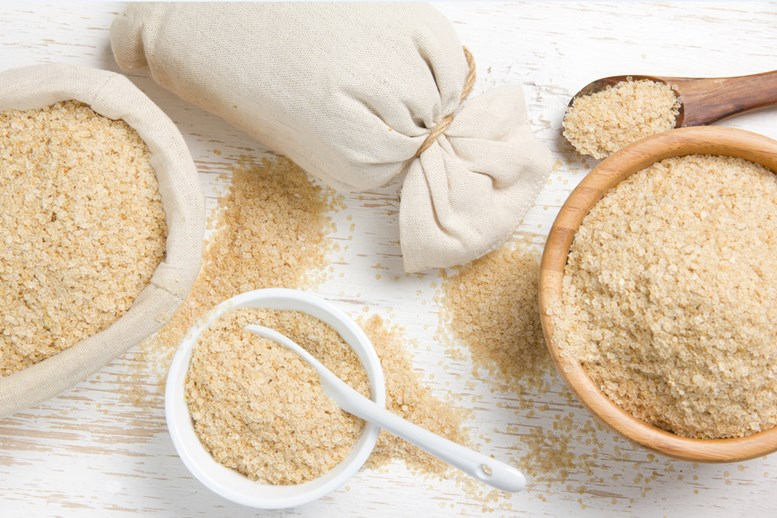 Amaranthus, collectively known as amaranth, consisting of more than 50 species, some of which are cultivated for use as cereals, vegetables and ornamentals, and others of which are considered weeds. Amaranth grain is one of the most ancient forms of cultivated food. It is named from the Greek word amarantos which means ‘the never fading’. Amaranth has broad green leaves which are used in cooking and it produces bright flowers of purple, red or gold colors that maintain their vibrancy even after they are harvested and dried.

Amaranth is a pseudocereal crop. Cereals are grasses while pseudo-cereals are non-grasses that are used in the same way as cereals. Amaranth is classified among the pseudo-cereals due to its content of saccharides (62%) which is slightly lower of that of common cereals but with a higher digestibility. Different from the other two pseudo-cereals, quinoa and buckwheat, it is not necessary to remove the seed coat of amaranth. Hence, the seed can be used directly in most cases.

Amaranth grain is characterized by relative greater levels of proteins and lipids and lower starch contents than the major cereals (maize, rice and wheat). Amaranth grains contain high levels of nutritionally favorable proteins which have an amino acid composition close to the ideal protein. It has a digestibility score much higher than soy, milk and wheat. Amaranth also contains an unusual type of starch and high-quality oil. Due to the content of potential health-promoting compounds such as rutin and nicotiflorin and peptides with anticarcinogenic and antihypertensive activities, amaranth is considered as a ‘natural biopharmaceutical’ plant that could increase human health. For these reasons, amaranth has been attracting worldwide attention as a high potential new crop with multiple uses. 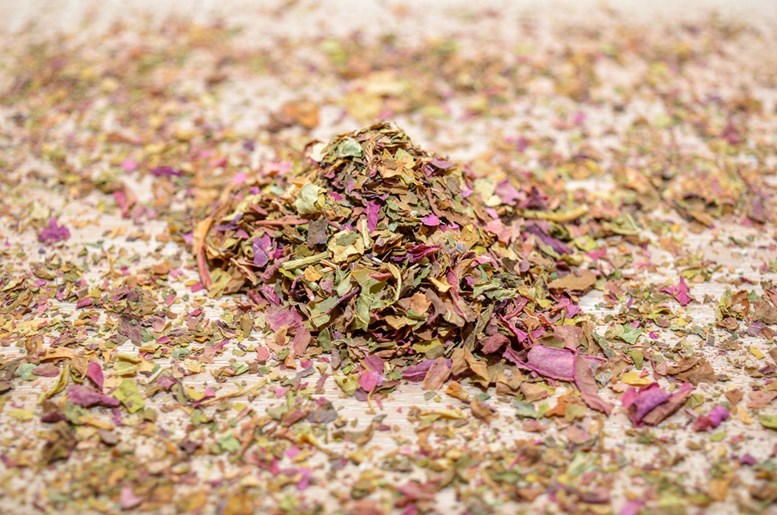 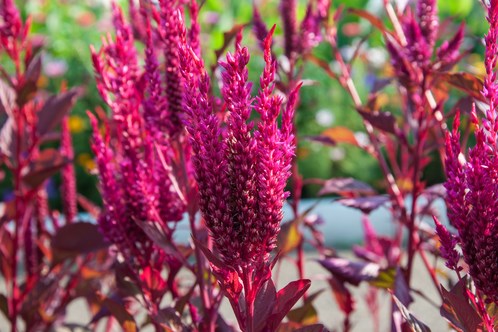 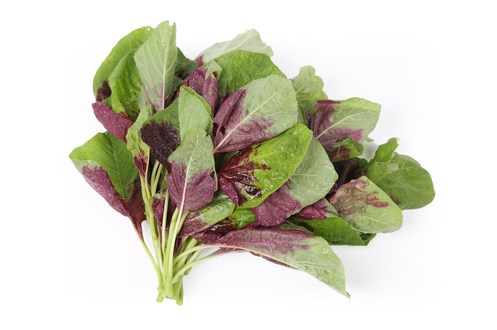 The nutritional value of pseudo-cereals is mainly due to their protein content and amaranth has higher protein content than buckwheat or quinoa. Amaranth contains 16-18% protein, compared with values of 14% or less in wheat and other cereals. Amaranth seed protein is especially noteworthy due to its excellent balance of essential amino acids that the human body cannot manufacture. Amaranth protein composition is near to the ideal protein according to FDA requirements for adults.

In particular, amaranth contains an unusually high percentage of the amino acid lysine, which is present only at low levels in wheat, corn and rice. Lysine is an essential amino acid that facilitates absorption of calcium and synthesis of collagen, elastin, hormones and antibodies in the human body. An adequate amount of lysine in our diet is important and you can increase your lysine intake by replacing normal grains with amaranth grains.

In contrast to most common grains, the proteins in amaranth are composed mainly of globulins and albumins, and contain very little or no storage prolamin protein, which is the major components of the gluten protein fraction. The prolamin proteins are the main storage proteins in cereals and also the toxic proteins in coeliac disease. For people with celiac disease, amaranth is a good choice of dietary grain source. Amaranth contains more protein than any other gluten-free grains.

Amaranth grain contains a high level of dietary fiber. One cup of raw amaranth contains 18 g of fiber as compared to the 2.4 g of fiber in an equal amount of white rice. More than 70% of amaranth’s fibers is insoluble. These fibers are non-digestible in our gastrointestinal tract and play an important role in stimulating bowel movement and eliminating constipation, bloating, cramping and even colon cancer.

Amaranth contains peptides that inhibit the activity of angiotensin and lower blood pressure. Angiotensin I-converting enzyme (ACE) plays an important role in the regulation of blood pressure as well as in cardiovascular function. ACE generates the powerful vasoconstrictor that leads to the development of high blood pressure with its accompanying pathological symptoms. The anti-ACE activity of bioactive peptides of amaranth makes it a good natural cure for hypertension.

Amaranth grain has been shown to effectively reduce blood glucose levels and increase insulin levels in diabetic rats, which suggests that amaranth grain could be beneficial in the correction of hyperglycemia and prevent diabetic complications. Amaranth flour can be used to partially substitute wheat flour or other cereals and can make the low-GI diet more nutritious in terms of amino acid pattern and minerals.

Amaranth lowers blood cholesterol level and reduces the risk of the cardiovascular disorder. A study of USDA showed that the healthy oil in amaranth could significantly reduce total cholesterol and LDL cholesterol in chicken. Later studies found that it is the rich dietary source of plant sterols (phytosterols) of amaranth having the cholesterol-lowering properties. Phytosterols have a very similar structure to cholesterol but cannot be absorbed in the human intestine. It inhibits intestinal cholesterol absorption thereby lowering plasma total and low-density lipoprotein cholesterol levels.

Calcium is crucial for bone health. Amaranth contains more than twice the calcium content of milk. Amaranth is also a good source of lysine which helps the body absorb calcium and reduce its lost in urine. Hence, eating amaranth could help prevent bone loss associated with osteoporosis. Moreover, studies also suggested that the combined intake of lysine and arginine makes bone-building cells more active and enhances the production of collagen.

Amaranth contains squalene, a natural anti-inflammatory substance. It is related to a number of bioactive compounds, including carotenoids, coenzyme-Q10 and Vitamin A, E, K. Researches have demonstrated that squalene and its related substances have significant roles in the management of inflammatory conditions and is efficient in terminating the inflammatory responses. In addition, amaranth oil, which contains high levels of unsaturated fatty acids and squalene, is also an effective natural antioxidant supplement which helps to reduce the inflammation. 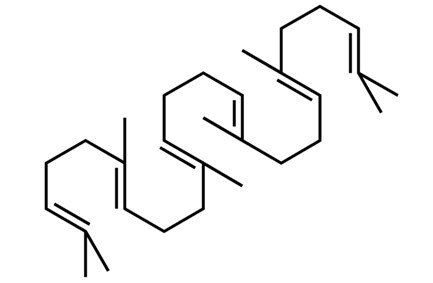 Side effect of eating too much Amaranth 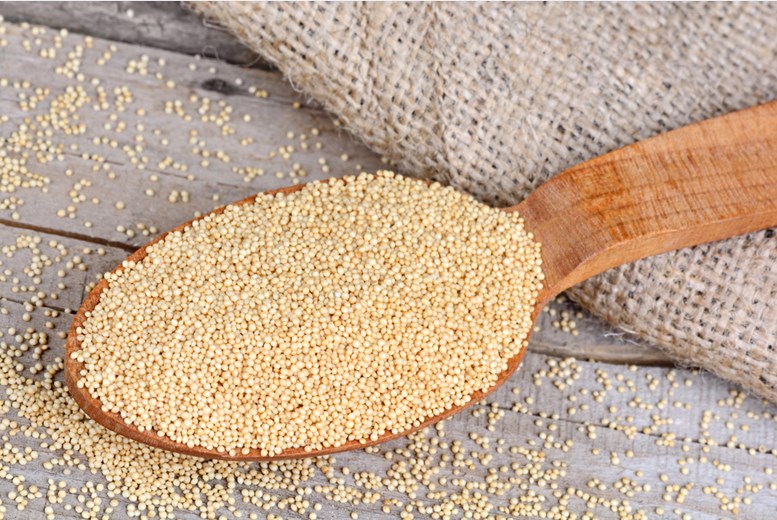 Amaranth has no known toxicities and is good for general consumption. However, it should not be eaten raw because it does contain certain natural anti-nutrients components, such as oxalates and nitrates, which can be eliminated by boiling and proper preparation. Precautions should be taken by people with special conditions:

For people with intolerance to lysinuric protein, eating amaranth may cause diarrhea and stomach pain. Moreover, another side effect of lysine increase body’s calcium absorption, and bring free, damage-causing amount of calcium in the body. So avoid taking large amounts of calcium and lysine at the same time.

For people with hypoglycemic concerns, eating too much amaranth could be potentially dangerous because of its ability to lower insulin levels. Care must be taken in this instance. 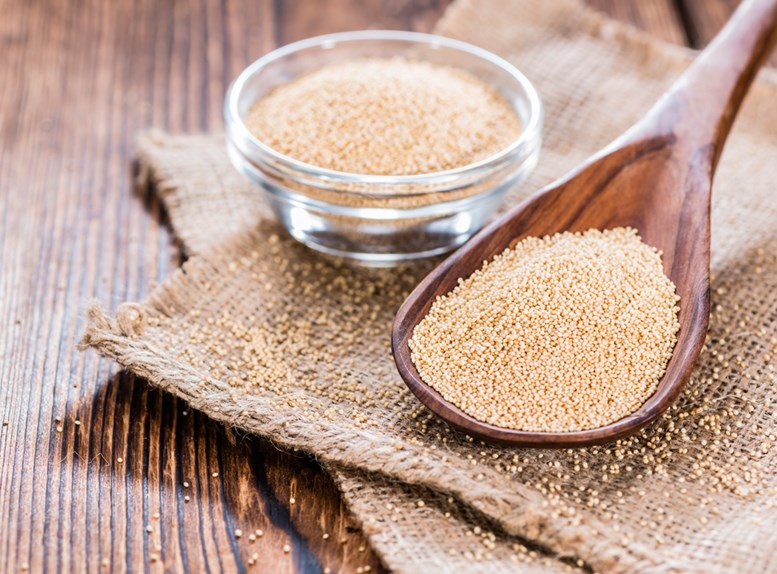 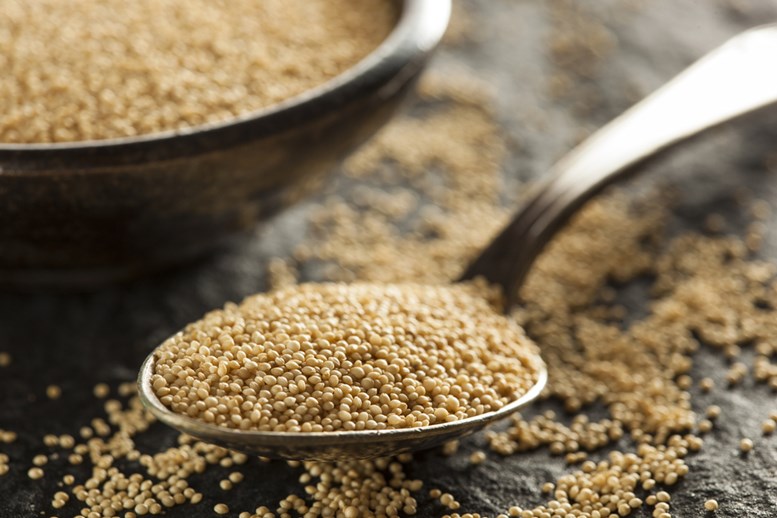 For every 100 g of cooked Amaranth grain, you will get the following macro- and micro-nutrients: 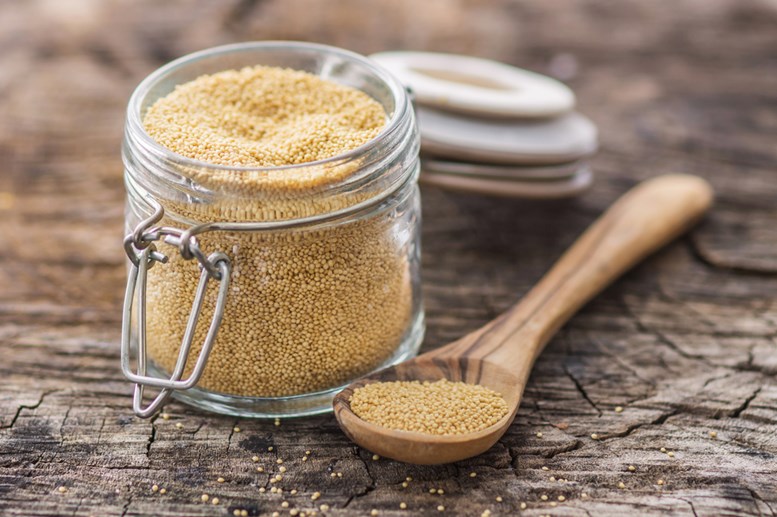 Amaranth is native to South and Central America. It was a staple in the Aztec diet and used in religious rituals.It was cultivated on a large scale in Mexico and Central America until the early sixteenth century.Amaranth was a major crop for the pre-Columbian cultures in Latin America. The religious use of amaranth in Aztec culture was seen by the Spanish conquistadores as a dangerous imitation of the rituals of the Catholic Mass, and its cultivation was therefore prohibited and the cult was banned. Since then, levels of amaranth cultivation remain very low.

Amaranth grain is now finding its way to baked goods and breakfast cereals in other parts of the world. It has recently come to be considered as a promising food crop owing to its resistance to stress and high potential for biomass and grain yield. It is cultivated as a minor crop in Central and South America and some areas of Asia and Africa. Beside Latin American countries, amaranth is now produced in the USA, India, Africa, China and Eastern Europe and Russia. The cultivation of amaranth to sue the grain or leaves as food has also become established in Africa and Nepal, and it is a re-emerging crop in Mexico. Since the 1980s, grain amaranth has been grown commercially in the USA with a fair degree of success. The largest production area of amaranth from 2001-2010 is China where it is harvested as swine food rather than for human use.

In many South American countries, amaranth is sold on the street as ‘popped amaranth’. In India, Mexico, Nepal and Peru, it is made into breakfast porridge. There is a Mexican confectionary snake called ‘algeria’ (means joy in Spanish) that is made from popped amaranth mixed with sugar and honey.

Generally, amaranth products are sold in speciality/organic food stores, in the health food section of grocery store, or through direct marketing. Cooking amaranth is simple: gently boil the grains with water for 15-20 minutes with occasional stirs. The cooked amaranth does not lose its crunchiness completely. It maintains the integrity outside and becomes soft inside. 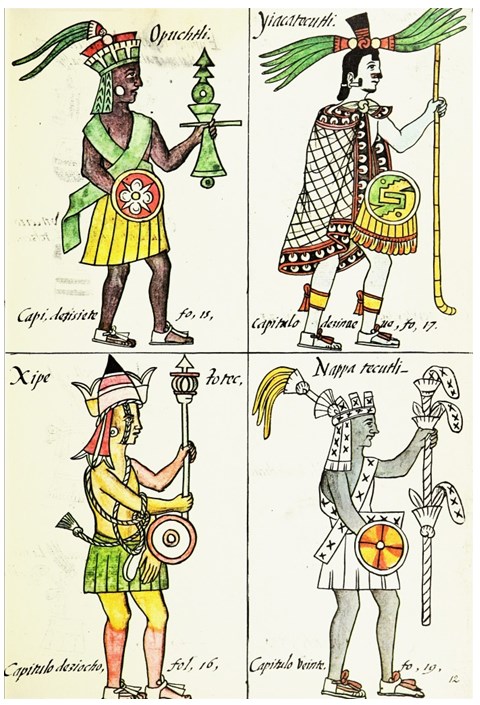 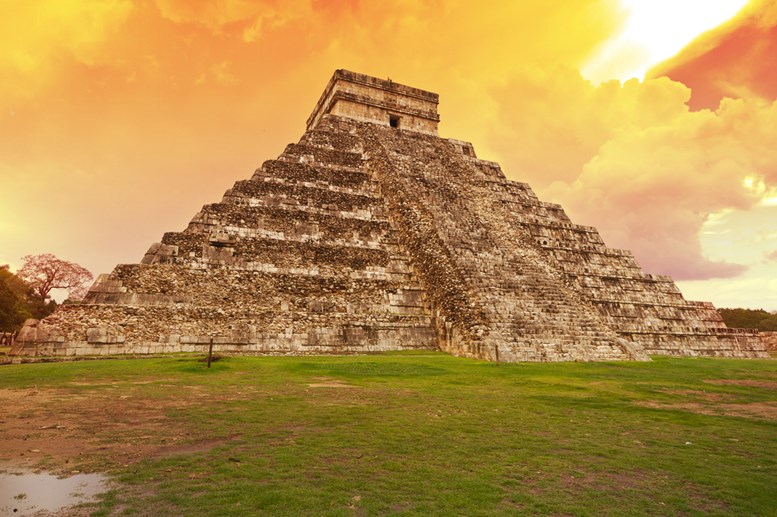 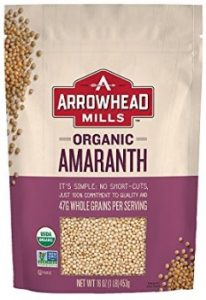 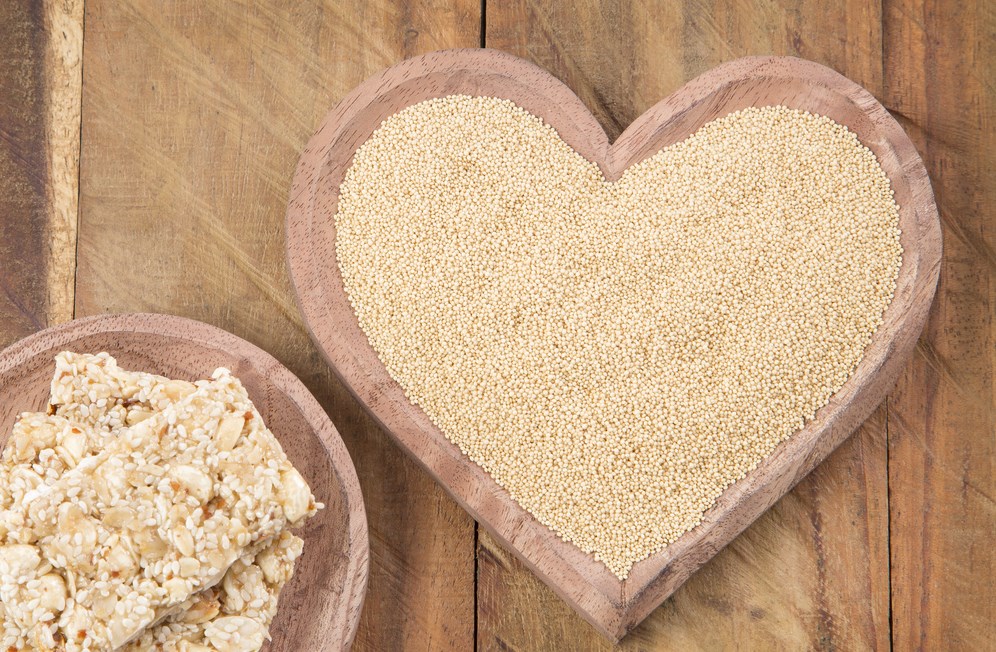